#ACIS2015, the Tweet Tag of this year’s conference provides evidence that the techno-tropes of social media and the digital humanities are slowly influencing the shape of Irish Studies, and conversely it can be seen that the lens of Irish Studies can help us understand better these new emerging digital academic landscapes.

For example, a comparison can be drawn between James Joyce’s writing style and the use of language on Twitter. As David Norris notes, in Ulysses Joyce perfected his free indirect discourse and stream-of-consciousness techniques (the latter influenced by Edouard Desjardin’s 1887 novel Les Laurie’s sent coupés) to imitate the various ways in which the human mind “speaks” to itself through complex fluid patterns, random interruptions, incomplete thoughts, half words, and tangents.[i] Tweets, which are limited to 140 characters, seem to mirror Joyce’s writing techniques in conveying both focused and scattered thoughts, elliptical impressions, and affects. For instance, one can imagine a tweet-map of Paddy Dignam’s funeral cortege in the Hades episode, featuring Leopold Bloom, Mr. Power, and Simon Daedalus (Stephen’s father) “tweeting” random thoughts and observations as their creaking carriage travels across the streetscape of 1904 Edwardian Dublin from Sandymount, across the River Liffey to Glasnevin Cemetery. If one parses the episode, which alternates between external exposition and internal dialogues, it could be construed through the lens of the digital humanities as a series of “tweets” (Dan Dawson’s speech in the morning paper; Ben Dollard’s The Croppy Boy; Molly Bloom’s Concert Tour; tramlines for cattle and funerals; the Gordon Bennett race in Germany; a collection for the Dina children; the joking grave diggers in Hamlet.) Ironically, it is now Ulysses, Joyce’s ‘Big-Data’ novel (eighteen episodes, 740 pages, 265,000 words, and a lexicon of 30,030 terms, titles, and expressions) that is being digitally repurposed and mapped onto the streets of the twenty-first century city during its annual Bloomsday celebrations. One can perceive a correlation between language, text, and computing by viewing Ulysses as Joyce’s staging ground for Finnegan’s Wake (1939) whose hyper-spatial use of language anticipated the linguistic and coding realms of social media platforms like Twitter emerging today. Jacques Derrida observed that Joyce’s writing style was decades in advance of a 1000th-generation computer “besides which the current technology of computers and micro-computerized archives and translating machines remain a bricolage of a prehistoric child’s toys.”[ii]

I was struck by the use of social media at the conference, as it provided the means for conference organizers to shape the conference’s dialogue.  It also helped re-organize sessions for truant papers such as the author’s Bloomsday’s Big Data, GIS, Tweetflickrtubing and James Joyce’s Ulysses (1922). My paper explored the content and location of tweets on Bloomsday 2014, refracted through a geographical information system of Joyce’s Carlo Linati Schema, which mapped people tweeting across the post-Celtic Tiger city (or from Global locations) as they re-enacted and celebrated Ulysses one hundred and ten years after the day it was set. The one dedicated session on Digital Scholarship in Irish Studies was chaired by Joseph Lennon of Villanova. The session featured papers by Lennon and Michael Johnson (“A Digital Map of Hunger Strikes in British Prisons, 1913-1940”), Marion R. Casey (“Resurrecting the Ethnic Village: New Research on Irish America”), Oliver Wallis (“Surfing the Wake: The Online Reconfiguring of Finnegans Wake”) and showcased Irish Studies scholars’ emerging forays into digital realms. However, other individuals in other sessions such as Joe Kelly from the College of Charleston—who employed Google Earth to map the urban ecologies of Dubliners and the “Circe” episode of Ulysses—provided an example of the slow infusion of the digital methods and perspectives. In addition, the ACIS 2015 Twitter account managed by Barry Devine, introduced the running commentaries of a Joycean-like digital ecosystem, as people move through the time-spaces of the conference venue, and interacted in the environs beyond. Some examples: 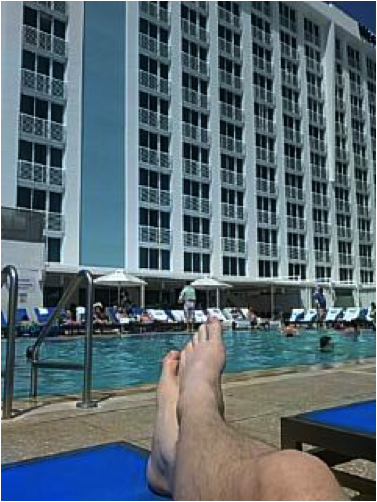 In conclusion, Samuel Beckett once asked: “must literature alone be forever left behind on worn out paths abandoned long ago by music and painting?”[iii] The same can be asked of academic studies and critiques of Irish history, literature, art, music, culture, etc.  The emergence of these new types of digital methods and ecosystems promises not only to change the ways in which Irish Studies is performed, but more profoundly the manner in which it is perceived,  received, analysed, and experienced both in scholarship, and in live events such as the American Conference of Irish Studies 2015 held in Fort Lauderdale, Florida.