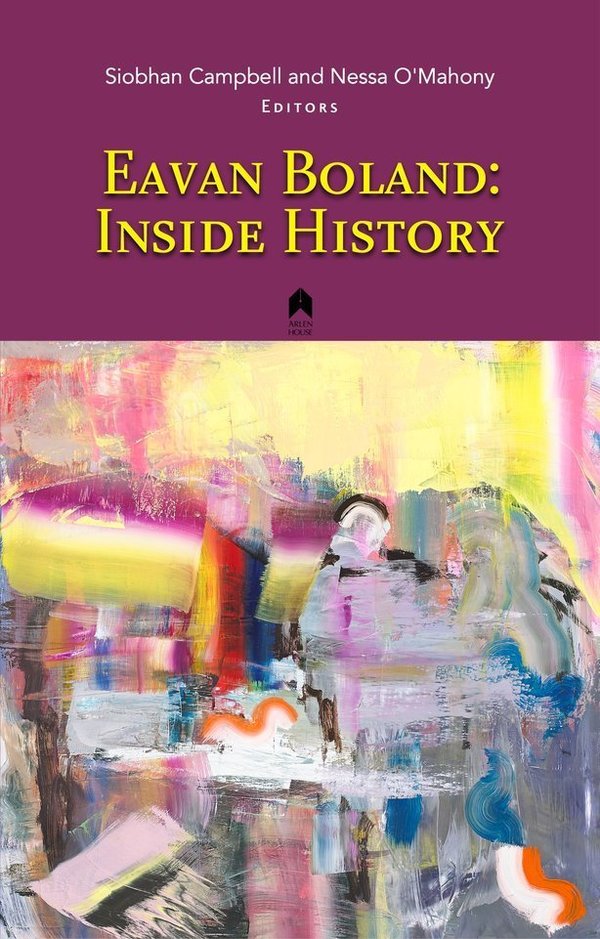 Eavan Boland: Inside History is a timely consideration of Boland’s poetry and criticism. In 2014, Carcanet Press published A Poet’s Dublin, a collection of Boland’s poems and photographs released to commemorate her seventieth birthday. In June of that year, Boland and fellow poet Paula Meehan met on the Abbey Theatre’s Peacock Stage to discuss the city and its influence on their work. A transcript of that conversation serves as the capstone of this anthology. Alternating between 15 poems and 13 critical essays, the collection features a range of critical and creative approaches but never loses sight of Boland’s craft.

As Eamonn Wall notes in the chapter “The Habit of Land: Eavan Boland’s Irish American Voice,” “a problem with her reception, influence and importance as a writer of poetry and prose has resulted from the fact that many scholars and critics have chosen to define her too narrowly, particularly in Ireland” (231). This essay and the collection as a whole resist attempts to define Boland and, rather, consider the work, as product and process, with admiration and without agenda. One thread highlights Boland’s use of ekphrasis. In “Eavan Boland: A History of the Poet in Five Objects,” Lucy Collins argues that Boland’s poetry “projects a subjectivity that is intimately connected with the objects that we encounter in daily life” (27). Through her analysis of the title object in “The Black Lace Fan My Mother Gave Me,” Collins demonstrates that the objects are not touchstones of memory but sites of intervention, and that “[i]f the subject-object relationship has been a vexed one for women artists and writers, then the resituating of the female experience by means of its relationship to the material world productively complicates this dynamic” (30). The prominence of visual art and object lessons in Boland’s work is vital and intricately related to the significant influence of Boland’s mother, the painter Frances Kelly. Kelly’s role is well documented at various points in the collection, with two especially noteworthy accounts. Patricia Boyle Haberstroh cites Boland’s discovery of one of her mother’s paintings, signed by the Cubist painter Leopold Survage, a former teacher of Kelly’s, and sold in a gallery as his work (66-67). Jody Allen Randolph also recounts a meeting during which Kelly sought a commission from Maud Gonne MacBride. Observing the collection of caged birds in Gonne MacBride’s Dublin home, Kelly asked how she reconciled her nationalist activism with her confinement of the birds. She received neither an answer nor a commission (295-96). Both anecdotes underscore Boland’s interest in the co-optation of women’s artistic voices and the friction that often exists between capturing beauty and making, or resisting making, a political statement.

In her interview with Boland, Meehan observes, “I know you’ve said you are not a nature poet, or rather, that you’re an indoor nature poet; and you rightly distrust the dead hand of the pastoral tradition, or its modern derivative, the mannered set-pieces of something called ‘nature’ as a mere backdrop to some anthropocentric, even separatist stance” (327-28). In this observation, Meehan pinpoints a facet of Boland’s work that has complicated efforts to locate her within any particular tradition. Péter Dolmányos’s essay in the collection focuses on Boland’s use of the “antipastoral,” her “balanced picture of human life [. . .] carefully relieved of illusions” (95). Boland’s treatment of emigration and suburbia, he contends, resists any depiction of territory in which “human ingenuity complement[s] natural beauty” (99). More specifically, he cites the antipastoral in relation to Keats’s urn in Boland’s “A Ballad of Beauty and Time” and “Object Lessons,” in which a broken coffee mug depicting a hunting scene rejects Keatsian premises of beauty and permanence. For Boland, objects and artifacts are never sylvan historians but informers and liberators of histories, many of them previously unspeakable. It is precisely this shift from outside history to inside history that the contents of this collection highlight.

One way in which Boland has navigated the inside/outside spaces of history is through classical mythology, which is discussed most specifically here by Nessa O’Mahony, Nigel McLoughlin, and Colm Tóibín. O’Mahony traces Boland’s use of myth, and in particular the story of Ceres and Persephone, from her early work and its “indebtedness” to Adrienne Rich to later writing that has influenced the next generation, including Sinéad Morrissey, whose work appears in this collection. O’Mahony asserts that “[p]erhaps one of Boland’s greatest legacies is that [. . .] she opened the door on a whole other range of entry and departure points for her successors” (149). On a related note, Nigel McLoughlin’s focus on Boland’s use of metamorphosis as metaphor, which reflects a shift over time from a persona shaped by “external agents of change” to more internal transformation (214), also reminds us, as does A Poet’s Dublin, that we are co-creators of our physical spaces, and that such creation is ever shifting. Boland’s reclaiming of mythology as a locus for women’s narratives has indeed been paramount in her work and will remain a defining feature of her place in not only the Irish canon but the literary canon more broadly. “The Pomegranate,” long a fixture in literature textbooks, uses the Persephone myth in a way that remains fresh and relevant for readers new to Irish literature and contemporary poetry, and one wonders what nuances will be discovered by Boland in light of the birth of a grandchild in 2014.

In his essay, Tóibín considers Boland’s use of mythology both in the context of Irish politics and in the intersection of the realms of private and public. The 2006 poems “And Soul” and “The Lost Art of Letter Writing,” he argues, “come from a lifetime’s conjuring with tone, conjuring with the pull between plain statement and pure soaring possibility, with the tension between the minutely personal and the effort to find a myth or a governing sense of shared experience” (52). Her work, he suggests, attains equilibrium by using myth and history as a palimpsest, locating traces and overlaying them with new narratives. This postcolonial reading has particular valence as we reread Boland’s work in light of the past several decades of Irish history and of unfolding global events.

If Boland’s efforts to rectify her location “outside history” can be described in a phrase, a useful one might be collection contributor Gerard Smyth’s “the questioning of shibboleths” (270). Whether through her use of mythology, her rejection of the pastoral, or her subversion of the domestic, Boland has always managed to use the code in order to upend it, to enter history from outside while pushing language to test its limits. What is perhaps most remarkable about this collection is its consistent, and uncommon, dedication to the language of the poetry. Critical essays often lose sight of meter, punctuation, syntax, and stanzaic form, but the essays here show deep regard for Boland’s craft. One example is Siobhán Campbell’s “Eavan Boland and the Development of a Poetics: ‘It may be beauty / but it isn’t truth.’” Campbell frames her essay by positing that from the beginning Boland has grappled with “the question of how best to write a socially-engaged poem within the lyric imperative” (156). Her incisive analysis of this imperative is rooted in considerations of grammar, cadence, and assonance, and her close reading of “The Journey” reminds us that Sappho appears as Boland’s Virgil, guiding her through the underworld and instructing her to serve as the memory of the silences that preceded her.

The melding of poems and essays serves as a fitting tribute to Boland’s work to date. It is impossible to do justice to the collection in so little space, but a final observation is that it feels deeply personal. The foreword by Mary Robinson reflects on meeting her friend at Trinity College in the 1960s and later quoting “The Singers” in her inaugural speech. She thanks Boland for “instilling in me a deep belief in the need for us to look at civic life and an imaginative life as inseparable” (12). While all the poems are indirectly dedicated to Boland, several cite her directly. Michael Longley’s “The Hebrides,” Paula Meehan’s “It Is All I Ever Wanted,” and Jean O’Brien’s “Resonance” are explicitly dedicated, O’Mahony’s “Role Reversal” is written “after Eavan Boland,” and the epigraph of Katie Donovan’s “Doors” is from Boland’s poem “Legends.” The essays adopt a writerly approach to Boland’s work, and many of the contributors, like Boland, are both poets and critics. The guidance of the editors, poets both, lends a keenness and sensitivity to the collection, and even where personal connections may not exist, the treatment of the work feels personal by virtue of its respectful handling of the texts, an inside look at a body of work once defined by its being outside.