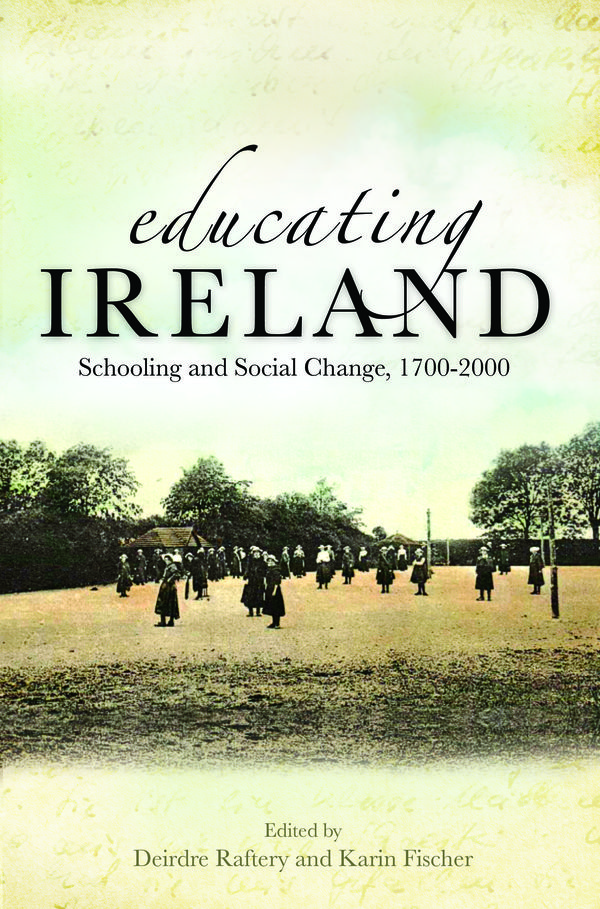 Such is the dearth of work done on the history of Irish education we should really welcome any new collection of work on the subject. The foundational work of scholars such as John Coolahan, Donald H Akenson, Anne V O’Connor and Susan Parkes hangs over the field, their productivity and commitment collectively shaming the generations that have followed in their footsteps. This collection emerges, for the most part, from recent graduate research undertaken at University College Dublin—seven of the eleven contributors connect to the School of Education there. In a sense that is appropriate. Much of the impetus for the early to mid twentieth-century interest in the history of education emerged from that institution, and at the urging of a most energetic professor of education—Timothy Corcoran S.J. His energy helped to define the field from his appointment in 1912, and the work produced by his students—P.J. Dowling and Martin Brenan in particular—continues to inform scholarship to the present. Indeed, their traces can be found in the essays presented in this collection, a fact highlighted by Antonia MacManus in the first chapter.

Part One on “policy and practice” comprises three short chapters on various aspects of education in the eighteenth and nineteenth century. Antonia MacManus revisits the topic of her excellent 2002 book, The Irish Hedge School and its Books 1695-1831, now in its fourth printing. The chapter is a strong summary of that work, but there are only three works cited in the footnotes that were published in the interim, and several recent essays relevant to the fascinating history and mythology of the hedge school are not cited at all.[1] Christopher McCormack’s work on the various Endowed Schools Commissions of the long nineteenth century derives much valuable information from primary sources. One might argue with the author with regard to assumptions he is making about the ‘colonial’ character of the work done by the commissions, or indeed his assertion that the second half of the eighteenth century was a period of “deep seated intellectual unease” (2) in Ireland, but the chapter charts new territory for those who might want to continue that argument. Tony Lyons brings this section to a close with a discussion of the contribution of Thomas Wyse to Irish educational thought, and the relative neglect of its importance.

Part Two is nominally dedicated to nineteenth century education, despite most of section one focusing on that century also. It opens with a quite general chapter on Irish women and elementary education by Eilís O’Sullivan. Clara Cullen follows this with an excellent piece on the Museum of Irish Industry in Stephen’s Green. Meticulously researched and well contextualised, Cullen’s work shows the considerable penetration of that institution into what we would now call non-traditional audiences for adult education. Between 1853 and 1867, it averaged 35k visitors a year and had an ambitious programme of lectures aimed at the lower middle classes as well as catering for the demand for further education from women across the city. Cullen’s chapter is followed by Deirdre Raftery’s reprinted chapter on the Irish governess from 2000, and Catherine Nowlan-Roebuck’s work on the Presentation Order and national education, building on the authors previously published work on convent schooling.

The book closes with four chapters, the first of which charts the relationship between the Church of Ireland and the education policies pursued by the southern Irish state post-1922. In this chapter, Martina Relihan raises all sorts of interesting questions, and more could be done to extend this to an island-wide analysis in the future. Brian McCarthy’s chapter on the in-house training and education of the Garda Siochána draws on conservative (and sometimes inevitably dull) official internal reporting mechanisms through the twentieth century, but does the reader a valuable service by pointing out continuities and discontinuities from the RIC force that preceded it. Marie Clarke locates her study in the 1960s—a radical decade for Irish education across the board. Clarke looks at the intermediate certificate as an (unsuccessful) bridging device across the secondary-vocational divide. The book ends with a chapter by Karin Fischer, who edited the book along with Deirdre Raftery, on education in Northern Ireland in the 1980s and beyond. Beginning with good old Basil Bernstein, this is a lively chapter with the kind of colour and verve so notably absent from some of the other contributions.

This collection seeks to pull together emerging research over quite a long stretch of time, from 1700 to the present. In truth, it is an apparently random selection of very disparate chapters on aspects of Irish education across three centuries. Not every aspect of this endeavour is successful. The volume would be strengthened by an introduction that might guide the reader as to the significance of the collection in relation to Irish educational historiography and the thinking behind the topics covered. The inclusion of a conclusion or reflections section at the other end would similarly unify better the essays. These improvements could address the collection’s broad struggle with periodization. Only the first chapter, for example, addresses the eighteenth century in any real sense. More seriously, some of the chapters included here are reprints of previous work, or re-workings of old material long available to researchers in the field. On the credit side, some of the chapters are genuinely illuminating, particularly those on more recent education policy, and will be useful to those working on contemporary education policy north and south of the border in Ireland.