The Belfast Group Writing Workshop (1963-1972), which met regularly and drew together students and faculty from Queen’s University Belfast as well as writers from the local community, evolved through two phases over its nine years. The first phase saw leadership from Philip Hobsbaum, while the second proceeded under the guidance of Seamus Heaney (with later assistance from Michael Allen and Arthur Terry). When the workshops came to an end in 1972, “a remarkable number of the participants had published their first collections and launched promising literary careers” (Stephen Enniss, “The Belfast Group Writing Workshop”). The Group meetings, at least to some degree, thus helped foster the work of key sets of emerging Northern Irish poets in the latter half of the twentieth century.

Belfast Group Poetry|Networks opens a new and important window into these meetings and the Group more generally. The site aspires to enumerate the full list of the “Group sheet” drafts that formed the core of the workshop activities and to provide digital editions of a subset of those drafts, including texts by Seamus Heaney, Philip Hobsbaum, Michael Longley, Paul Muldoon, James Simmons, and Ciaran Carson. Most importantly, the site publishes peer-reviewed essays on the Group and a series of network graphs and maps based on data from the drafts and other archival sources. The site also allows access to underlying data, thereby promoting broad reuse of core digital materials.

The original “Belfast Group” website (2000) grew out of a collaboration between Emory University’s Special Collections (now the Manuscript, Archives, and Rare Book Library) and the Lewis H. Beck Center for Electronic Collections (now part of Emory’s Center for Digital Scholarship). The original project (1998-2000), led by Steve Enniss and Chuck Spornick, focused on publishing the poetry drafts presented at the workshops. Some of these drafts are held at Emory, others at Queen’s University Belfast, and one is in private hands. The original project team obtained copies and permission to publish a selection of the drafts, then produced TEI editions of some drafts, but left many unpublished.

The new project (2012-2015) set out to extend and enhance the work of the original project by further structuring the original data. This new project has taken shape at Emory’s Center for Digital Scholarship (formerly the Digital Scholarship Commons), with funding provided by the Mellon Foundation. The new project focuses on “the question of who, exactly, constituted the Belfast Group,” a question difficult to answer due to diverse historical factors. To address the question, the project has sought “to make the large networks and relationships of the Belfast Group visible in a way they couldn’t have been previously” by drawing on the relevant holdings of Emory’s Manuscript, Archives, and Rare Book Library, plus the information available from the drafts themselves (Brian Croxall and Rebecca Sutton Koeser, “The Revised Site (circa 2015)”).

The result of this work is the new website, Belfast Group Poetry|Networks.[1] This new site capitalizes on enhanced versions of original project data and integrates a variety of open-source technologies (plus software developed specifically for the project) to provide new functionalities with which to study the data. The project leadership has also taken important steps to ensure appropriate credit for the institutions that contributed to the project as well as, notably, the many individuals that participated: “In connection with the Collaborators’ Bill of Rights, we have asked individual team members to choose the language that best describes their work on the project” (“Credits”).

The site includes three new and important peer-reviewed critical essays.[2] The first of these, Brian Croxall and Rebecca Sutton Koeser’s “What Do We Mean When We Say ‘Belfast Group’?,” takes up the question suggested by its title. The essay offers a fascinating account of the project team’s attempt to use a “data-centric representation of the Group” to complement (rather than replace) former scholarship on the topic as well as to engage the messiness of the written archival record. A key point of the essay is that the visualizations produced for the project undermine the notion of the Group as a single, static entity and instead highlight the two phases of Group endeavor while foregrounding relational links between the two phases.

The second essay, Croxall and Koeser’s “Archival Biases and Futures,” revisits a topic briefly covered in the first, namely the incomplete nature of the historical data on which the project is based. The essay touches on how the data might be improved and expanded in the future, but also acknowledges the challenges of working with the archival materials in the first place. The authors temper the discussion of these challenges (e.g., the biases of archival curators, the tendency of archives to focus on famous authors) with a review of some of the benefits of a network approach, most notably the potential for enhanced discovery of and connections among disparate source materials.

The final essay, “Women in the Belfast Group,” explores a key issue that the team encountered during the project: “[W]e noticed something troubling about some of the women we knew were associated with the Belfast Group: while they sometimes appeared central to the network at other times they were completely invisible.” Further investigation revealed two causes for this problem: archival bias and authorship. As a result, the essay goes on to discuss some of the steps that the team took to improve the data so that it better reflected the contributions of the women involved in the Group.

Beyond the essays, the key contribution of the new site to existing scholarship lies in the use of enhanced project data to visualize the networks of relationships among Group members and, to a lesser extent, the connections of individuals to specific places (“Networks & Maps”). These visualizations take the form of a handful of graphs and maps whose data draws on the Group sheet drafts as well as relevant materials at Emory, including catalogue information for materials as yet sealed to researchers.  Throughout, the site highlights the need to be mindful of gaps in the data. 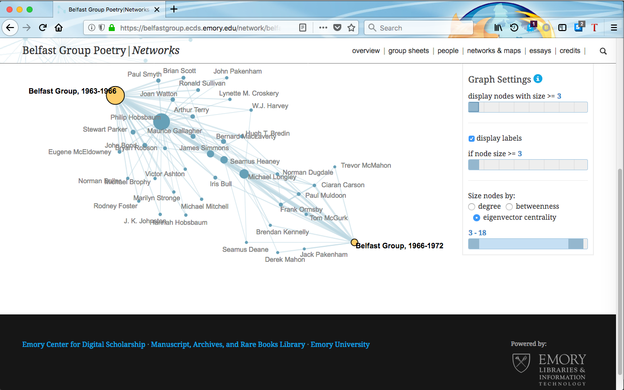 Figure 1. Screenshot of “Belfast Group Authors by Period.” As the site notes, “[t]his network graph visualizes the two periods of the Group—when Hobsbaum chaired (1963–1966) and when the Heaneys, Arthur Terry, and Michael Allen organized it (1966–1972).”

In each case, users are given the option to manipulate the network nodes in various ways.

The site also provides useful documentation on development of the data plus basic access to the data itself. The documentation encompasses text on the “process” by which the data was created (Brian Croxall and Rebecca Sutton Koeser, “The Revised Site (circa 2015)”), the steps by which the team harvested and built RDF for the site (“About the Data”), and the software developed to carry out the work as well as details of the various platforms and technologies used for the project (“Credits”). The code for the site is open-source (released under an Apache 2.0 License) and is available from GitHub. Users also have the option of downloading the site’s network data as a series of GEXF files and the Group poetry drafts in the form of TEI XML files.

Given the merits of the site, it would benefit the project team to engage in some follow-up site review and bug testing. The most significant of these bugs relates to the “Group Sheets” page, a fundamental page because of its focus on the typed copies of literary works that were distributed to the Group prior to meetings. This page, in its opening prose, promises to detail “the contents of individual Group sheets, including the author and the names of the works that appeared in draft form” and to make a selection of these sheets available as digital editions. Yet in actual fact, the page does not display any relevant material. Clicking the link to “digital editions” embedded in the prose changes the page’s URL and adds another link at the bottom of the page for accessing the “digital edition” (sic), but clicking on that link in turn removes the “digital edition” link from the page, and so takes users back to square one.

There are also a handful of inaccurate statements regarding site content, and, separately, there are elements of the site that will problematize the experience of users. The photos of the writers at the bottom of the home page are all hyperlinked, but the hyperlinks simply take users back to the home page, i.e., where they started. At least one page states that “You can also see the network of connections among individual writers and their peers on individual biography pages,” but the present reviewer was unable to find those individual biography pages. Another page, which might have contained such biographies, instead has no underlying content and again links back to the home page.

Other issues have the potential to curtail the site’s usefulness in more complex ways or to turn users away all together. The lack of a site key or basic table of contents prevents the site’s full content from being readily accessible and, in some cases, makes it completely hidden. For instance, the present reviewer did eventually find the missing editions of the Group sheets cited above, but only after using the site’s search bar, a step that not all users will take. The site did not contain any obvious links to the GitHub repo, while links to individual XML data files were scattered throughout the site rather than being collected in a single place for ease of access and download. During the week that the present reviewer was browsing the site, the site was down on three separate occasions but in each case displayed only a generic “Internal Server Error” page directed at project developers, rather than text for outside users to inform them that they had indeed reached the correct site.

Resolving the foregoing issues (the majority of which are minor) would enhance the overall flow of the site. Other changes could improve the critical text. The home page needs a high-level introduction to and overview of the project, including its content and goals, so that new users can quickly get a sense of what the site has to offer and understand why the site is worth exploring further. The project team would do well to highlight the significance of the site, as a scholarly intervention, both briefly on the home page and at more length on the “Overview” page. It would also be good for users to have an explicit statement of the project’s editorial policies. Such a statement might cover topics like the team’s definition of a digital edition, project-specific TEI coding practices, and metadata development criteria.

Belfast Group Poetry|Networks contains a small, but rich and provocative selection of data and critical materials built to high scholarly standards. The site, in its new incarnation, is an important contribution to critical discourse on twentieth-century Irish poetry and contemporary digital humanities practice, despite some secondary shortcomings. The site also demonstrates how data built well by one generation of digital humanities scholars can be revived and reinvented by a second generation, a point with larger implications for the field of digital humanities as a whole. The site’s long-term track record and the current project team’s accomplishments bode well for future development and should inspire the confidence of potential funders to support new phases of site endeavor.

[1] The old website is still available via the Internet Archive.

[2] All three essays appear on the same webpage.