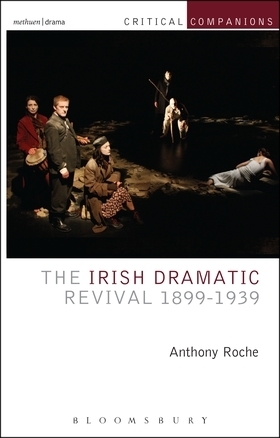 The innovative series Methuen Drama Critical Companions has already published several volumes on Irish drama, James Moran’s The Theatre of Sean O’Casey, The Theatre and Films of Martin McDonagh by Patrick Lonergan, Katherine Weiss’s The Plays of Samuel Beckett, and Christopher Murray’s The Theatre of Brian Friel: Tradition and Modernity, but the series’ brief to provide both “critical survey and analysis” [my emphasis] makes the task undertaken by Anthony Roche in his study of the Irish Dramatic Revival particularly challenging. The Irish Literary Revival and its drama has been the subject of critical commentary almost from the moment of its inception; Earnest Boyd’s The Contemporary Drama of Ireland appeared in 1917 and subsequent works across the decades by critics such as Una Ellis-Fermor, D.E.S. Maxwell, Nicholas Grene, and Christopher Murray might suggest that there was little left on which to comment, let alone fulfill the other requirement of the series, that volumes should draw on “original research.” However, as might be expected from a critic whose work on Irish drama has been among the most informed of his generation, Anthony Roche fulfills this difficult task with aplomb.

The time frame of the study is determined by the production of Yeats’s The Countess Cathleen in 1899 and the playwrights’ death in 1939, and Roche is explicit in asserting the “incontestable and central fact” (3) that not only did Yeats set the agenda for the Irish Dramatic Revival but that the movement is synonymous with the Abbey Theatre that he co-founded. The dominant presence of Yeats (who figures in two chapters), along with individual chapters on Synge and O’Casey, largely conforms to expectations of a standard introduction to the Dramatic Revival, but a detailed chapter on Lady Gregory and, perhaps surprisingly, one on G.B. Shaw, provide a more original framework for understanding the complexity of the moment. Indeed, Roche makes a strong case for Shaw’s inclusion and closes the book with the provocative assertion that, albeit belatedly, “Shaw has become the house dramatist” of the Abbey (204). This then is a seriously considered, rather than conventional study. Accordingly, while the progression through the chapters is broadly chronological, from Boucicault in Chapter 1 to Martin McDonagh in the conclusion, the examination of the major plays—and there is no attempt to be slavishly complete—weaves across periods and production to make illuminating comparisons and connections.

So, and in a welcome recognition of her undervalued stature as a playwright, Gregory’s link between characters and their conversation is compared to that of Sheridan and Wilde, the similarity of plot between her The Gaol Gate (1906) and Harold Pinter’s Mountain Language (1988) is established, and, in a provocative and original moment, Roche demonstrates that a comparable conversational dynamic operates in both Gregory’s The Workhouse Ward (1908) and Martin McDonagh’s The Lonesome West (1997). Similar apercus are found throughout the study: Shaw’s O’Flaherty, V.C . (1915) is seen as an anticipation of O’Casey’s The Silver Tassie (1928), which, Roche argues, should itself be considered alongside The Plough and the Stars (1926) as a companion drama on conflicts of 1916. In a similarly imaginative and cross-cultural comparison, Roche follows Stephen Watt in drawing parallels between O’Casey’s Juno and the Paycock (1924) and Clifford Odet’s Awake and Sing! (1935). This comparative approach culminates in the conclusion, appropriately titled, “The Legacy,” where links between works of the Dramatic Revival and plays by Marina Carr, Frank McGuiness – and Bertolt Brecht are forged, not to mention an outline of the process by which the style of music developed for James Flannery’s five-year project of staging Yeats’s plays at the Abbey laid the foundation for Riverdance. And, as an indication of Roche’s finely-tuned critical antennae, he includes Yeats’s observation that, in Shakespeare’s histories, “play supports play” (37), a comment which now resonates anew in the context of DruidShakespeare.

Insights and observations such as these make the book a stimulating read for those familiar with the works of the Dramatic Revival, but the commentary on individual plays is equally valuable and well-judged, allowing just enough plot synopsis to enable more detailed critical analysis. And, where the book is especially rich, is in establishing the context of production, staging, casting, and contemporary commentary that grounds the analysis of the individual plays in the felt moment of their time, particularly when, drawing on Joseph O’Connor’s 2010 novel, Ghost Light, Roche describes the Abbey as “that zone of play where the rigidities enforced by Irish society became more flexible” (32).

Roche is particularly good on drawing attention to the work of other critics such as Ben Levitas, Susan Cannon Harris, and Michael McAteer whose studies both support his central thesis and extend it into areas—such as feminist and working class drama—that he can acknowledge but not fully develop. This alertness to the wider critical contexts in which he is working is perhaps most marked in the “Critical Perspectives,” an established feature of the Methuen Drama Critical Companions where existing work by three other critics form an appendix to the main body of work to provide more depth and detail. However, rather than choosing material that focuses specifically on plays and playwrights, Roche selects pieces from Paige Reynolds and P.J. Matthews, which provide the wider cultural and political context in which the Dramatic Revival can be understood. While these two selections give historical coloring, the inspired inclusion of an interview with Conor McPherson by Roche himself provides a fitting contemporary insight into the relevance of the Dramatic Revival and its resonance within the contemporary theater, as playwright and critic discuss the work of those who have been the focus of study.

Whether one comes to the book as a student looking for an authoritative introduction to the Irish Dramatic Revival, or as an experienced academic interested in finding connections to pursue in one’s own research, Anthony Roche proves to be a most engaging Critical Companion.