At Christmas time in 2012, the bestsellers list in Ireland had an unlikely entry in the non-fiction hardback category. It was a 710 page academic book, written by 60 contributors, with over 150 maps, and hundreds of illustrations. Few purchasers would have read the Atlas of the Great Irish Famine (Cork University Press, 2012) from cover to cover; it’s just not that sort of book. But this extraordinary bestseller showed a desire in Ireland and across the Irish global diaspora to engage with the complex history of Ireland’s Great Famine, 1845-1852.

Few events have attracted as much international interest in Irish history as the Famine, the crucial turning-point in the history of modern Ireland. The current emphasis on the Irish Revolution has overshadowed the Famine in recent years but the case for its centrality is a compelling one: at least one million people died, another million fled as refugees in a world-wide dispersal of global significance, and the ineffective and inadequate response from the British government exposed the hypocrisy of the Act of Union of 1800, leaving a bitter legacy that shaped British-Irish relations for over 150 years.

The Ireland’s Great Hunger Museum opened at Quinnipiac University in 2012 and has produced the excellent Famine Folio series now numbering thirteen in total, of which the four comprising series 2 are discussed here. The folios, according to the museum’s website are designed as “a unique resource for students, scholars and researchers, as well as general readers, covering many aspects of the Famine in Ireland from 1845–1852—the worst demographic catastrophe of nineteenth-century Europe.” 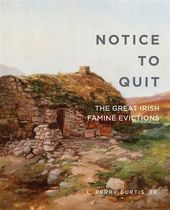 Each folio is lavishly illustrated and the production values are high, and they are also attractively priced. Students will appreciate the succinct introductions to key topics, scholars will enjoy the distilled wisdom of the distinguished authors, but general readers will struggle with what are often scholarly accounts dressed-up in a user-friendly format.

L. Perry Curtis Jr., formerly of Brown University, is one such distinguished scholar, having written a number of highly-regarded books on Irish history and path-breaking studies of anti-Irish racism and prejudice in North America and Great Britain. This folio, Notice to Quit: The Great Famine Evictions, builds on his important study of the depiction of eviction in Ireland (2011). Curtis’ narrative is brimming full of insights such as the critical role that racial and religious prejudices played in shaping attitudes toward Irish small-holders. Strangely, however, we must wait till page 21 (out of 35 pages) before we come to evictions. In short, the folio ends up as a series of reflections on the Famine in general and focusing on ideology. Much of this is interesting and engaging, though not especially original or new. 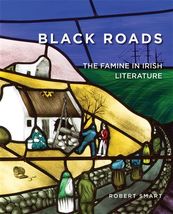 The same characterization could be applied to Robert Smart’s account of the Famine in Irish literature in Black Roads: The Famine in Irish Literature. It argues that much of Irish literature produced in the years after the event is about the Famine looking at authors as diverse as Tom Murphy and Eavan Boland. This folio suffers from all the weaknesses of inaccessible literary criticism, including this helpful gem of advice:

We tend to rely on what we have seen or known before to help us understand the new, and that habit of mind naturally restricts our ability to “see” things which are outside the boundaries of what we have already experienced. Furthermore, the “meaning of things” is almost never in the text; rather, we bring meaning to texts and make them fit the contours of our understanding. (8)

Standard stuff for an undergraduate lecture, but what the general reader will make of this is anybody’s guess. While Smart gives a nod to all the greats of Irish literary criticism, this folio is a strangely opaque account. We are told that the Famine was “undoubtedly the most Gothic event in Irish history” (12) though this is more of a throwaway comment than a pivot for his argument. In a highly derivative discussion of historical revisionism as it relates to the Famine, the labels are revealing: Christine Kinealy is described as an “eminent historian” (24), whereas on the following page, Roy Foster is described as a “well-known historian” (25). Whether it is better to be eminent or well-known is another question!

There’s an argument to be made about the shortcomings of professional historical writing on the Famine but Smart simply does not have a handle on the complexities to say something new and original. A most astonishing omission from this folio is any discussion of Melissa Fegan’s important work on the Famine in Irish literature (2002), or equally that of Marguérite Corporaal, Christopher Cusack and Lindsay Janssen (2012) on Famine memory in Irish fiction (2012). That neither is cited nor referenced raises questions about how grounded this account is in current scholarship on Irish literature and the Famine. 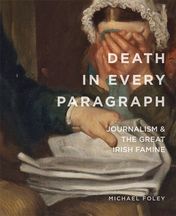 Michael Foley’s folio on journalism and the Famine, Death in Every Paragraph: Journalism and the Great Irish Famine, is a competent and accessible account of a neglected subject. Foley’s narrative is especially good on Irish and British newspapers, and the background to the coverage of the Famine. He argues that the Famine was the world’s first major humanitarian disaster to be widely reported in the media, and that it set out the parameters for the way in which similar events were presented in the press. Oddly, he does not explore the international press, which given the extensive coverage in the United States, Canada, and across the British Empire during the early years of the Famine, seems a missed opportunity to explore the transnational circulation of news and knowledge about the unfolding catastrophe in Ireland. Students looking for an introduction to the subject will get an assured and authoritative account here.

By far the most original and intellectually sophisticated folio in this set is Gearóid Ó Tuathaigh’s fascinating assessment of the fate of the Irish language and the role of the Famine in the decline of Irish. Ó Tuathaigh’s judicious reading of the competing explanations advanced by scholars is a masterclass in the critical evaluation of change in historical study, and also a model of engaged historical writing. The Irish language is a blind spot across the various disciplines that make up Irish Studies. Partly, this has to do with proficiency in the language. But it also has to do with an almost obsessive focus on Irish literature in English. Imagine an Irish Studies program or event without the three great figures of James Joyce, Samuel Beckett, and W. B. Yeats? The Gaelic tradition of literature and language is curiously on the sidelines at most Irish studies conferences. 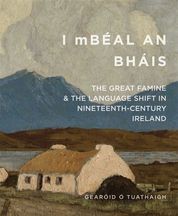 In any event, for those looking for a way into what was the most profound transformation in Irish history, the language shift from Irish to English, Ó Tuathaigh’s treatment is an excellent critical account of that process. He argues that the death and emigration of the Famine years “decimated the rural underclass” (7) of which a high proportion were Irish language speakers. He explores the issue of bilingualism, explaining why the two languages could not co-exist, as in many other places. He also casts doubt on “rational” and “pragmatic” interpretations, making the point that the broader context which was Anglophone—such as the state, the market economy, and civil and religious authorities—was deeply antagonistic to the use of the Irish language.

For many after the Famine, emigration to English-speaking environments in North America and Britain was the only option of escaping rural Ireland. In time, this modest and self-effacing treatment of a critical and much misunderstood topic may well come to be seen as a major reinterpretation of the language shift and the cultural consequences for modern Ireland. So when authors have the opportunity to present an extended interpretative essay on a key subject, the Famine Folios work very well indeed. They are a unique form of communicating scholarly research. The series editors have sought to exploit this potential to offer fresh perspectives on what might seem like well-covered topics. In this respect, they are a very important initiative in the field of Irish studies and show that there is much more that can be said about Ireland’s Great Famine.