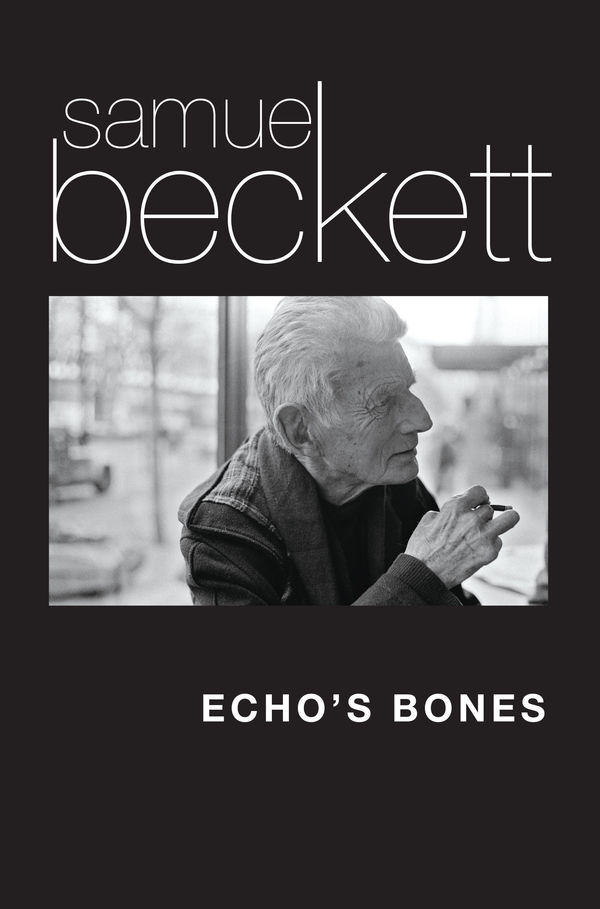 “…scarcely had my cord been clumsily severed than I struggled to reintegrate the matrix, nor did I relax those newborn efforts until death came and undid me” (46).

Posthumous publications are in vogue; take Mark Twain’s multivolume Autobiography of Mark Twain (2010, 2013) and, more recently, Laura Ingalls Wilder’s Pioneer Girl, which is slated for publication next month. Beyond autobiography, fictive works like Jack Kerouac’s The Haunted Life (2014) have found the light of day in the afterlife of the authors. We are drawn to these works because iconic writers penned them but also because of the intrigue surrounding their literary histories. Why and where were these texts buried for so long? What secrets might they contain?

Samuel Beckett’s recent work of fiction, Echo’s Bones, published by Grove Press and edited by Mark Nixon, fits into this category of texts. The sensational history behind Beckett’s proposed yet excluded conclusion to his short story collection, More Pricks than Kicks, cannot help but whet one’s appetite to read it. In his artful introduction, Nixon details the series of events that led to the short story’s drafting in 1933 and then exclusion from the final manuscript. These events hit their denouement with a letter to Beckett from Chatto & Windus editor, Charles Prentice. “‘It is a nightmare. Just too terribly persuasive,’” he declared upon reading it: “‘It gives me the jim-jams…Do you mind if we leave it out of the book...?’” (xii). Upon receiving Prentice’s remarks, Beckett wrote to his friend, Thomas MacGreevy, that “‘no doubt [Prentice] was right’” (xiii). From there, the life of “Echo’s Bones” ends, dead and buried to all except those visitors to the Rauner Library or Harry Ransom Center. Resurrected from the archival grave, “Echo’s Bones” is now available to a wide, public audience that may take Prentice’s words into consideration. What do we, in the twenty-first century, make of “Echo’s Bones?” Is it truly a “nightmare?” If it was published as originally intended, how might it have functioned as the final story in More Pricks than Kicks? And how does it work more broadly as a part of Beckett’s oeuvre?

Perhaps part of what appalled Prentice is the manner through which the short story handles the themes of life and afterlife. “Echo’s Bones” opens with our antihero, Belacqua Shuah, no longer dead in the grave, as we left him at the conclusion of “Draff,” but now (semi)resurrected, undead, occupying some place in between life and death. For while

the dead die hard, they are trespassers on the beyond…till such time as the lord of the manor incurs through his long acquiescence a duty of care in respect of them. Then they are free among the dead by all means, then their troubles are over, their natural troubles. But the debt of nature, that scandalous post-obit on one’s own estate, can no more be discharged by the mere fact of kicking the bucket than descent can be made into the same stream twice (3).

Here, the narrator suggests that the living carry over in death, not the “troubles” incurred in life, but some more elusive “debt of nature.” Burdened with this debt, the dead are, for a time, homeless wanderers. “At least it can be truly said of Belacqua,” the narrator explains, “who now found himself up and about…back at his old games in the dim spot, on so many different occasions that he has sometimes wondered if his lifeless condition were not all dream and if on the whole he had not been a great deal deader before than after his formal departure, so to speak, from among the quick” (3). With this summation, the text sets an unnerving tone as it questions the capacity for both the living and the dead to access a meaningful existence. Belacqua’s thoughts add further doubt to the idea that either condition, life or death, allows one to be “awake.”

With this dark take on life and afterlife, the story then shifts in tone as it details a series of humorous, bizarre, and ridiculous events. Post-resurrection, we find Belacqua sitting on a fence, worn out and bored from “picking his nose between cigars” (4). His sitting and smoking is interrupted, however, through a succession of encounters with three living characters. First, he meets Zaborovna Privit, a prostitute, who encourages him to follow her home. She is more than happy to feed and “put [him] up” for the night (10). Belacqua next meets the grieved Lord Gall of Wormwood who begs advice on how to beget a son. In response, Belacqua offers an Ecclesiastes-like series of instructions. He tells Lord Gall to find satisfaction in his land, labor, God, and wife, to cultivate a healthy balance between rest and work, to pray for himself and others, and to “keep up [his] pecker, stick to [his] games,” and “transmit to prosperity a name” (24); for this seems to be (to the dead Belacqua and certainly not to the living Belacqua we remember from More Pricks than Kicks) the meaning of life—to not merely “be continent,” but to “titter affliction out of existence” (25). Lord Gall, however, seeks more than advice; he also insists that Belacqua impregnate his wife or leave him “to the bottle,” to “die in the rats intestate” (31). Though Belacqua reluctantly follows his bidding, he only partially accomplishes Lord Gall’s mission as Lady Gall conceives a daughter rather than a son. The final section of story’s “little triptych” (4) finds Belacqua perched on his own headstone, “drumming his heels irritably against the R.I.P.” (36). As he sits, he converses with Doyle, the cemetery’s groundsman, who is in the process of robbing his grave. After a lengthy debate over what they will find, Doyle opens Belacqua’s coffin to discover little left to pillage, merely “a handful of stones” (51). This unearthed reality results in a narratorial resignation, stated for the second time in the story, that “so it goes in the world” (51).

While these stones and the short story’s title overtly reference Ovid’s tale of Echo and Narcissus in Metamorphoses, in which Echo’s bones, like Belacqua’s, turn to stone, the tale also recalls the old prophet Ezekiel’s encounter with skeletal human remains in the valley of the dry bones. In this story, the Hebrew God commands Ezekiel to speak life into the bones as a symbol of God’s plan to restore the people of Israel to a place of honor—to “open up [their] graves and bring [them] up from them.”[1] Belacqua, however, is unlike those transformed bones. He is an upright corpse without a shadow; not a redeemed body of flesh. Yet some of the characters Belacqua encounters see him as a potential Ezekiel, or a quasi-prophet, who will not direct them toward the path of human redemption or remind them of divine promises but, instead, who may share a snippet of life’s secrets from one side of the grave to the other. Perhaps he might vitalize their “Haemo” (20)—a reference to blood as well as to Lord Gall’s given name (80). Belacqua’s visitors’ interests, however, frustrate him as he admits that though he may attempt to philosophize, he is just as baffled by life’s mysteries as they are; for how can he “say why Kant was not a cow” (30). With this tension between himself and philosophy and himself and the other characters, Belacqua begrudgingly endures the presence of his visitors, going along with their whims reluctantly. He hates, as in the case of Lord Gall, his “oppressive presence” (24) as his “host and gaoler” (27). Belacqua is not a free and contented soul at rest or a prophet inspired by divine revelation but is instead “a corpse in torment,” a paltry pile of stones (8).

Through these exchanges between the living and dead, the text thus mediates on a paradox, questioning what life shrouds and what death enlivens. Playing, like Joyce, with the words “womb” and “tomb”—“womb-tomb” (5), “womby-tomby” (14), and Beckett’s combination of their Latin and Greek roots, “uterotaph” (35, 97)—the short story collapses distinctions between these literal and metaphorical transportation centers, and it asserts that both venues act as an enveloping veil rather than a gestation headquarters for birthing true knowledge. Life and afterlife in the story, instead, work as illusions, which may have been, for Prentice, the most alarming of the story’s themes. Both conditions shroud and provide a semblance of “relief” rather than a transcendent manifestation of it (43); for of death, as Belacqua declares, “I sometimes wonder whether death is not the greatest swindle of modern times” (40). Yet of life, Belacqua articulates what Doyle is unable to say of himself aloud: “Sometimes he feels as though this old wound of his life had no intention of healing” (43).

While such declarations may cause the reader’s discomfort, they are embedded within scenes that will simultaneously elicit the reader’s laughter. The iconic dark humor that Beckett is known for makes its mark in such moments as when Doyle attempts to offer his philosophical two cents to Belacqua. He reminds Belacqua of the fifth commandment, to “honour your father, your mother,” and, as he adds “Göthe. Do I make myself clear?” (44). Such humorous quips—Beckett’s overall mastery of the tragicomic spirit, even in this early example of his writing—unsettle the reader’s ability to accept every line of the text as an aphorism, even when the narrative itself asserts that “this is a true saying” (3). Instead, the playful descriptions, dialogue, and tone open the text to ironic and other interpretive possibilities.

The writing style Beckett adopts in “Echo’s Bones,” so different from the previous stories in More Pricks than Kicks, inevitably invites comparisons with the work of Joyce. Nixon acknowledges that “there is hardly a sentence…that is not borrowed from one source or another,” whether a literary allusion or, as he points out, Beckett’s deliberate self-plagiarism from another of his posthumous publications, Dream of Fair to Middling Women (xvi). Through these means, Nixon notes that the story is “densely allusive, more Joycean, than any of Beckett’s other early writings; both on a verbal and structural level, it harnesses a range of materials from science and philosophy to religion and literature” (xvi). As such, perhaps we might call “Echo’s Bones” Beckett’s Finnegans Wake. The short story’s elusive and allusive qualities, its plays on words, its preoccupation with life cycles, and its open-ended conclusion all recall Joyce’s final work.

As with Finnegans Wake, “Echo’s Bones” is a difficult read that benefits from supplementary materials. Thankfully, the editor of this inaugural edition recognized this need and augments the narrative with Prentice’s letters to Beckett and fifty-seven pages of annotations. With only forty-nine pages comprising the short story itself, these annotations thoroughly amplify the tale. Though not conclusive, they provide extensive insight into many of the narrative’s seemingly endless associations and offer readers a more holistic and contextual experience of the short story.

Overall, with its sensational literary history and unusual content, “Echo’s Bones” should be read both as a curiosity and as a meaningful contribution to Beckett’s greater body of work. The story showcases a moment of Beckett’s stylistic development where he dons the “accumulative style” that characterized Joyce’s writing before then abandoning it for the more bare bones, skeletal structures favored in his later writings (xviii). As such a literary artifact, “Echo’s Bones” is thus a text that will meaningfully reverberate and issue compelling echoes across Beckett’s oeuvre.