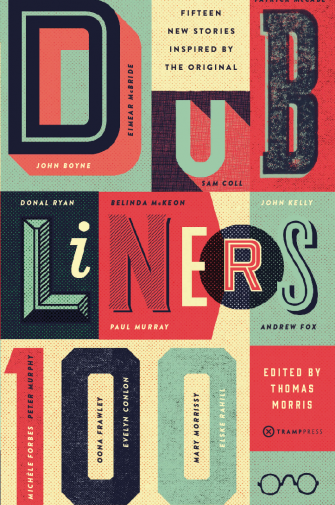 Dubliners 100 is a collection of fifteen new short stories, one author for each, with titles that come from James Joyce’s original volume published a hundred years earlier (in 1914). The cover tells us that the new stories are “inspired” by the earlier ones (rather than “based” on them), which strikes me as an apt term. Some of the authors use Joyce’s characters, themes, and plots very clearly, while others are only tangentially connected to the originals. Peter Murphy’s “The Dead,” for instance, contains pieces of its pre-text that are read out loud, but the narrator’s voice is utterly unique and different from that of Joyce’s earlier one, and its genre comes close to being a modern Gothic ghost story of sorts. As an avid fan of Joyce, I am choosing to focus here on four of the stories that retain marked traces of their origins in Dubliners and that open up the earlier versions in fascinating ways.

For me, the most interesting story is Oona Frawley’s “The Boarding House,” which reduplicates Joyce’s initial structure of the three contrasting points of view of the main characters: Mrs. Mooney, her son-in-law (renamed Ger), and her daughter (renamed Therese). They occupy the titular boarding house—not because of its shady reputation (as in Joyce’s story)—but because Ger and Therese have lost their pricey country home and are forced to move back to Dublin and live with Mrs. Mooney: as a result, Therese has said that Ger “felt like he was in a boarding house, and that would naturally limit the time they [the young couple] had together alone” (76). The second part of that sentence hints at the obliquely presented problem at the heart of the tensions between the triad of carefully delineated central figures.

Frawley transforms and updates several scenes from Joyce’s original: the awkward discussion between mother and daughter; Ger’s “confession” to his older brother, rather than a priest; and the implied showdown between outraged mother-in-law and guilt-ridden Ger (off-stage in the revision as in the original). Both Mrs. Mooneys share a hypocritical morality, albeit expressed in different ways. The ingenuity of the story is one that may originate in Joyce’s version, when he provides the reader with background information on Bob Doran (Ger’s precursor):

As a young man he had sown his wild oats, of course; he had boasted of his free-thinking and denied the existence of God to his companions in public-houses. But that was all passed and done with . . . nearly. He still bought a copy of Reynold’s Newspaper every week but he attended to his religious duties and for nine-tenth’s of the year lived a regular life.[1]

The passage causes the reader to wonder what’s the missing information behind the provocative ellipsis, and how Doran conducts himself for the unexplained one-tenth of the year (we find out in Ulysses). In today’s world, as revisioned by Frawley, Ger’s “secret life,” adumbrated by Joyce’s initial ellipsis, involves access to iPads, cell phones, and the Internet, with all their potential for private betrayal.

John Boyne follows even more closely the plot line of Joyce’s “Araby”: a romantic obsession, an awaited expedition delayed by a surrogate parent, a late arrival at an exciting event, and an anti-climatic disappointment. Boyne enriches the original by deepening the narrator’s sense of loneliness and by reversing the sex of the object of desire: a young man who is the brother of a girl named Mangan. Joyce’s evocation of disillusioned idealization is transformed into a recollection of homosexual awakening, complicated by internalized homophobia: the narrator wonders, “who could ever understand such a thing or tell him that he is not a monster” (34). Boyne’s final line is as poignant as Joyce’s, but instead of being a retrospective vision, it offers a disturbingly proleptic sense of what is to come: “That part of me that would be driven by desire and loneliness had awoken and was planning cruelties and anguish that I could not yet imagine” (37).

Paul Murray’s rendering of “A Painful Case” likewise reverses the sex of the object of attraction. Mrs. Sinico, who is figuratively (almost) silenced throughout the original, by both Mr. Duffy’s egotism and the biased narrative point of view, is replaced appropriately with a monk named Bill, who has taken—literally—the vow of silence. Murray’s update of Joyce’s central character is initially funny and clever. Duffy is now an acerbic restaurant critic, infamous for his scathing reviews: “’Dessert was a novel twist on Pandora’s Box,’ he observed of the Chancery, ‘in which all of the world’s evils had been baked into a soufflé’” (134). The original Duffy’s interest in music takes shape as his avatar’s obsessive interest in a “New Jersey Band Maximum Orange” (133), whose first album is called “Bile Beanz” (139), echoing the inane “headline of an advertisement for Bile Beans” that Joyce’s Duffy has pasted on a sheet of paper.[2] The band’s third album is “A Painful Case”: “The title of the record came from the prison psychiatrist’s evaluation of Maxtone,” the revered lead singer (144). Murray elaborates Duffy’s asceticism, arrogance, and vitriol with insightful and telling detail.

Several recent scholars of Joyce’s works have speculated that the central character of “A Painful Case” is gay (either knowingly or unconsciously), explaining the famous statement he writes after his relationship with Emily Sinico has ended: “Love between man and man is impossible because there must not be sexual intercourse and friendship between man and woman is impossible because there must be sexual intercourse.”[3] Paul Murray varies this possible relational confusion by suggesting that Duffy suffers from extreme homosexual panic: a fear of homosexuality that often takes shape as a fear of awakening or attracting homosexuality in others. When Bill, like Mrs. Sinico, assumes that Duffy’s interest in him is not strictly platonic, the consequences of this phobic complex are dire. The contemporary Mr. Duffy also imitates Maxtone’s masturbatory misogyny, offering another possible explanation for the original Duffy’s elusive “painful case.” Maxtone tells his followers, “Everytime I masturbate instead of touching a woman . . . I do a good thing for myself” (133).

Another story with interesting twists and reversals of the original is Donal Ryan’s “Eveline.” Both stories are about the conflicts between personal desires and familial “duty” (45)—a word directly used by Joyce. In the early version, the threat of unwanted immigrants (seen in Eveline’s father’s rant against “Damned Italians! coming here!”[4]) and her own desired emigration from Dublin are clearly presented, but they are not the story’s core. Ryan widens the scope of the earlier text by exploring immigration and emigration more politically. The story asks, I believe: Is there a real difference between the two terms? Or is the welcoming emigration of so-called “[r]eal live refugees” (42) a mere façade, covering official aversion to implicitly illegal immigrants (or “aliens” as they are often called in the U.S, with the revealing connotation that they are invaders from another planet)? I write this review in mid-September of 2015, with media focus on migrants from countries south of Europe seeking asylum in northern ones (most centrally, Germany), and on Donald Trump’s fantasy of building a wall between Mexico and adjacent American states. In this context, Ryan’s story becomes a timely and thought-provoking revisioning of its pre-text.

This review, like others, is “partial” in the sense of being based on my own interests, and in the sense of being incomplete (due to space limitations). I thought a few of the stories of Dubliners 100 were weak, mainly because they simplified their pre-texts—they served only to remind me of how intriguing their originals are. Dubliners is great to teach as an introduction to literature, because its stories are so patently examples of the difficulties of “fixing”—as both repairing and stabilizing—textual meanings. Joyce’s stories are celebrated for their openness to interpretation. The best in this new contemporary collection refuse to close or ignore the gaps, silences, biases, and ambiguities characteristic of the original versions. The collection as a whole is highly engaging, full of lively language, distinctive characters, and colorful jargon, and well worth reading. For pedagogical purposes, pairing pre-texts and their new incarnations would be a mutually enriching enterprise.