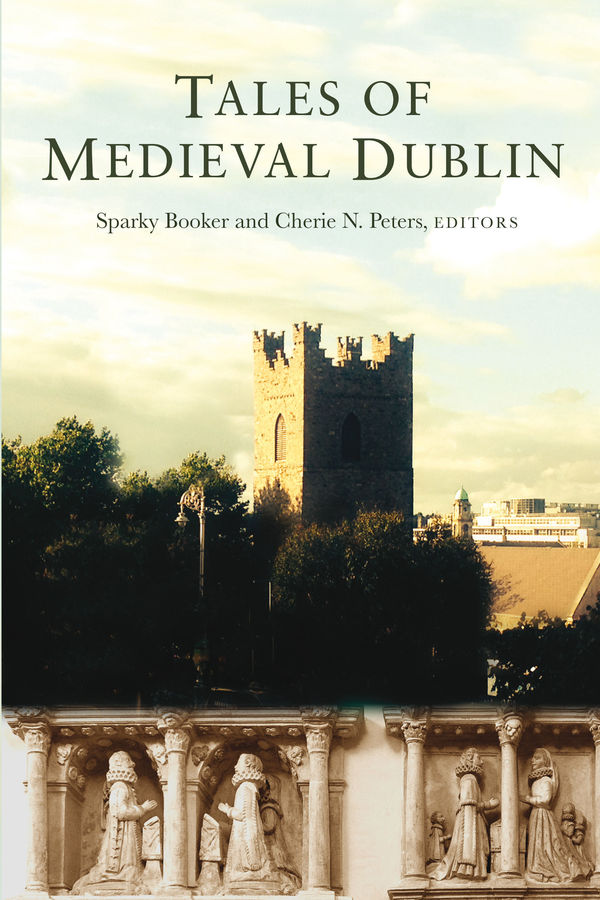 In 2010, the Friends of Medieval Dublin, working in collaboration with Dublin County Council, instituted a series of lunchtime lectures for the general public with the title “Tales of Medieval Dublin.” After a very successful first year, two further lecture series were organized in 2011 and 2012, with a final total of twenty-one lectures presented over this three-year period. Many are (or at least were) available as podcasts online, but few, if any, were available in print.

Tales of Medieval Dublin, edited by two of the organizers, Sparky Booker and Cherie N. Peters, seeks to rectify this by presenting a series of fourteen tales, all based on presentations given as part of the lecture series. At the heart of both the “Tales” lectures and the present publication is the idea of individual stories. Rather than presenting chronological narratives that discuss socio-economic trends and developments, these papers focus on individuals who lived in Dublin at different times between c.AD650, when the earliest (problematic) reference to the settlement occurs in the annals, and c.AD1600, by which time the consequences of reformation and reform had fundamentally changed the city and its environs. By focusing on individual life stories rather than broader trends, these essays provide fresh perspectives on some of the key periods of Dublin’s history, from its origins as a Viking longphort to its place at the heart of Tudor Ireland.

The essays are arranged broadly in chronological order, with the first five describing life in and around the Viking settlement; the middle four covering the period from the Anglo-Norman invasion to the Black Death, and the final five providing biographies of some of the city’s inhabitants in the later middle ages. The editors are to be commended for their determination to provide “tales” relating to all time periods and social levels, but, inevitably, the quantity and range of sources available has had a profound effect on individual essays. Seán Duffy’s “Saint’s Tale,” which begins the collection, is based on a single reference in the Annals of the Four Masters, and his paper demonstrates that even this reference to the death of Beraid, abbot of Dublin in AD650, is an eighteenth-century addition—and incorrect. Colm Lennon’s “Man of Law’s Tale,” on the other hand, which describes the life of James Stanihurst (d.1573), can draw on a (relatively) wide range of sources to map his career, his patrons, and his opponents in some considerable detail. The issue of sources is not simply chronological either. The overwhelming majority of Dublin’s citizens left no identifiable trace in the written, or indeed the archaeological, record, and this is particularly true of the poor. Poul Holm’s “Slave’s Tale” draws heavily on the Vita Sancti Fintani, a narrative that is not directly related to Dublin, in order to supplement the meager records for a group that he believes to have been both numerous and economically important there. In this, slaves are directly comparable to those living in Dublin’s hinterland, who produced the basic foodstuffs on which the settlement relied, and who were completely anonymous in the pre-Norman period. Thus, Peter’s “Farmer’s Tale” has no single core source beyond the law tracts and is not quite biographical. This is not to detract from either chapter or the validity of studying the lives of groups who are all too often forgotten, but it does give these essays a slightly different flavor to the others in this collection.

While records increase in the aftermath of the Anglo-Norman invasion, records of individual citizens remain rare, even among the richest inhabitants. Gillian Kenny’s “Wife’s Tale,” the story of Giliana de Moenis (d.1348), focuses on a rare surviving will, and provides useful information on an essentially unknown woman who was, nonetheless, a member of one of Dublin’s leading families. The other woman’s tale in this collection is by Howard Clarke, who focuses on an even more exalted (and maligned) figure, Gormlaith, mother of Sitric Silkbeard. Those involved in the medieval administration left more records behind—or were, at least, more likely to be recorded—and so we have Áine Foley’s thirteenth-century “Tax Collector,” one Thomas Crumlin; Margaret Murphy’s ”Archdeacon,” Nicholas de Clere (d.1303); and Edward Coleman’s “Crusader,” William Fitzroger, Prior of the Knights Hospitaller in Ireland c.1274-96. Our knowledge of the lives of all three has been increased by the fact that they fell foul of the law, if not the king himself, at some point during their careers. Other “Tales” are known because at least some personal writings have survived. These include Caoimhe Whelan’s “Notary,” James Yonge, one of the few surviving authors in Hiberno-English (died c.1439); Booker’s “Knight,” Christopher St Lawrence, who compiled the Book of Howth in the 1570s; and Katharine Simms’ “Poet,” Maoilín Óg Mac Bruaideadha, who lived in Dublin c.1600, when he was involved with a project to translate the New Testament into Irish. Finally, there are those who are best known through the physical evidence they left behind, even if the work of Michael O’Neill’s “Mason,” John More (fl. c.1380), cannot be identified with absolute certainty. Linzi Simpson’s “Skeleton’s Tale,” on the other hand, is a biography based entirely on archaeology, and a furnished grave found at South Great George’s Street in 2003.

The resulting mix of individuals, periods, professions, successes, and failures, is highly engaging. Many of the essays reveal their origins as oral presentations in that they are short, focused, and clearly structured, but their origin may also explain why some could, perhaps, have been referenced a little more closely. As the book is clearly aimed at the general reader, this criticism may be a little harsh, but given the intended market, it is surprising that there is no effort to provide a general, brief overview of the history of medieval Dublin as a background to the various tales. There is, indeed, no single, modern, introductory history of the city that covers the entire period from the settlement’s foundation to 1600 other than the primarily topographical essay in Clarke’s Historical Atlas. Thus, although this book will appeal to anyone with an interest in the medieval city and its denizens, it is perhaps most suited to those who are already familiar with the historical development of the city as a whole. As has already been noted, however, the Tales, both as a lecture series and as a book, deliberately moved away from such general histories. Its great success has been in adding diverse and very human faces to all periods of the settlement’s history.

It should also be pointed out that while the essays are accessible to the general reader, most, if not all, are based on fresh primary research, and these prosopographies form a welcome addition to our limited knowledge of medieval Dublin’s citizens. Hence, the book deserves a place on specialists' bookshelves, too. The authors, and in particular the editors, can be congratulated for building on the original lecture series and for providing an exceptionally vivid collection of “Tales” that succeeds in the bringing the medieval city to life.