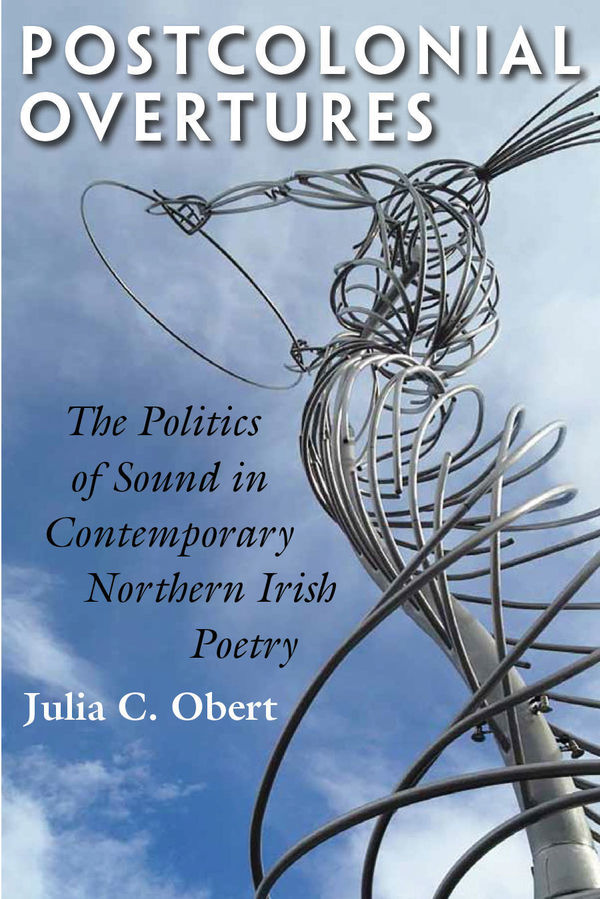 In Postcolonial Overtures: The Politics of Sound in Contemporary Northern Irish Poetry, Julia C. Obert takes up the call of philosopher Don Ihde's "acoustic phenomenology," which argues for the need to respond critically to the pervasive visualism of cultural studies, "recuperating the ear" in order to complicate our Western visually-anchored epistemology (5).[1] In this project, Obert opens a line of examination with implications not only for how we hear and understand Northern Ireland, but the way that the sonic elements of literature and culture affect how we understand our environments. While the now-cliché visual representations of the Troubles—threatening murals, hooded paramilitaries, razor-bladed "peace walls"—may no longer hold sway to the same degree as they did in during the height of the Troubles, it is still difficult to resist the allure of the visual and its promise to explain and "enlighten" our understanding of the political and cultural reality of Northern Ireland. Visually, territorial limits were, during the Troubles, both fixed by walls and constantly changing, marked by signs of violence. Acoustic limits are and have always been less rigid, and Obert argues that sound offers a fuller sense of place, a "potential counterpoint to Northern Ireland's 'unhomeliness'" that has resulted from the Troubles' decades of "topographical violence" (7) and, one might add, that has left Northern Ireland even more partitioned than it was at the signing of the Good Friday Agreement. Obert has chosen to explore in depth the work of Ciaran Carson, Derek Mahon, and Paul Muldoon (each of whom is allotted two chapters), poets who all evince a particular sensitivity to the aural environment. The concluding chapter focuses on a younger generation of Belfast poets, Leontia Flynn, Alan Gillis, and Gearóid MacLochlainn, who carry on the previous generation's "interest in local soundscape and meditate together on the role that sound might play in the ongoing work of reconciliation in their city" (4).

Obert's first chapter on Ciaran Carson, "Sounding the City," centers on Carson's construction of the sonic environment of Belfast, with particular attention to the connections between the themes and form of his poetry, in order to set the visual and cartographic organization of the city against the ways in which sound arranges the cityspace. The second Carson chapter, "From Song to Stutter," explores the tension between Carson's long and short line—the "struggle between….the consolatory cadences of a seanchai's circle or the craic of a ceilidh and the foreshortened stuttering line"—as evidence that "sound is both a salve for and a symptom of trauma" (74). The chapter examines his adaptation of the formal devices of oral storytelling and his desire to create community through musical forms and poetic and musical performance.

Obert's treatment of Derek Mahon suggests that his focus on the natural world in his poetry is not the nostalgic pastoralism of a displaced poet but the work of an "acoustic ecologist" who responds in his verse to the "perceptual violence" of the conflict (83) not only on the human inhabitants of Northern Ireland but also on the natural world. His criticism of sonic disruption and its effects extends beyond the immediate fallout of the conflict and into the effects of industrialization and globalization more broadly, suggesting that we nurture networks of human and environmental interrelationship over the flows of global capital. In her second Mahon chapter, Obert explores Mahon's attempts to create an "acoustic community" in his verse, an attempt that creates, she suggests, a temporary refuge of fellow-feeling that the poet himself acknowledges as ultimately unsustainable.

In turning to Muldoon, Obert once again anchors her reading in musical form; this time, she focuses on Muldoon's operatic tendencies, not only within his more traditional poetic output but also in his band Rackett's music and in his opera libretti. She argues that sound offers Muldoon the best means of creating his multi- and cross-cultural concept of "transgressive hybridities" (130) through his "building blocks of "ventriloquy," "intertextual phonetics," and "obsessively recurring acoustic leitmotifs" (131). Her readings, anchored as they are throughout in careful attention to sonic detail in language, form, and music, reveal Muldoon's sonic approach convincingly.

The final chapter, "Coda: 'The New North," turns first to the work of Queen's University Belfast's Sonic Arts Research Centre (SARC), a project which seeks to increase the awareness of acoustic phenomena in the city and help listeners think about the relationship between sound, place, and memory through projects such as the Belfast Sound Map project, the "Sounds of the City" installation, and the Belfast Soundwalk map. SARC does not "explicitly aspire to peacebuilding," but it does "clearly promote a shared sense of place," Obert suggests (180). Turning to the writing of younger poets Gearóid MacLochlainn, Leontia Flynn, and Alan Gillis, Belfast writers with connections to QUB, Obert sees their work as echoing that of SARC as they "imagine their way toward more comfortable—and perhaps more conciliatory—paths to belonging in a notoriously uncomfortable place" (181).

The vistas opened by Obert's work are broad; but, perhaps inevitably, the introductory claims are somewhat broader than those delivered. Despite the title, the book does center primarily, if by no means exclusively, on the sonic environment of Belfast; Mahon and Muldoon do provide a contrast, with Mahon focusing on the non-urban and Mahon and Muldoon on connections to places outside of Northern Ireland. While this strong Belfast focus does allow for a richer and more nuanced understanding of the soundscapes of Belfast and their literary (re)negotiations, one is left to wonder how the sonic experience of Belfast differs from that of, say, Derry, Portrush, Omagh, or Enniskillen. The big-picture view Obert offers at the start veers toward the overly-optimistic; it may be hard, given the aural oppressiveness of still-contested sounds, most notably but not exclusively during Orange marching season, to accept the assertion that sound in Northern Ireland functions primarily as a "source for community-building" (11). More convincing is her introductory "coda's" attenuated but more honest claim that Carson, Mahon, and Muldoon articulate, in their soundscapes, "a sphere of possibility and the place where possibility's limits are made audible" (20) alongside her epilogue's reading of the next generation of poets and their attempts to "suggest acoustic space as a possible register of reconciliation" (197). Certainly one should cheer any attempt to nurture that sphere of possibility—and to encourage a critical reading practice that helps to make us more sensitive to it.

Altogether, Obert uses the traditional tools of poetic analysis in the service of a larger examination of the political and cultural meaning of sound, bringing a new energy and sense of immediate relevance to the scholarship of poetry specifically and literature more generally. Her choice to focus on the acoustic elements of Northern Irish literature and culture picks up on some of the radical challenges offered by another Irish writer, James Joyce, whose focus on the aural experience of both his characters and his readers challenged what he seemed to present as the distancing and oppressive relationships fostered by a too-persistent fixation on the visual field. I mention this not only because Obert notes both Ciaran Carson's and Paul Muldoon's debt to Joyce (in chapters 2 and 6), but also because her own approach implicitly encourages critics to listen for lines of continuity both with Irish modernism and with other counterhegemonic texts, Irish and otherwise.

Obert's readings are elegant, formally sophisticated, and persuasive, with insights drawn from affect theory, cognitive neuroscience, and a deep familiarity with both classic prosody and musical structures. Her careful scansion and her sensitivity to other formal details are refreshing—how often, for instance, does one find a scholar so attuned to the nuances of language that they note a writer's "system of nasal consonance" (162)? Her writing itself offers a kind of aural pleasure typical of the writers she studies but much rarer in the scholarly writing scholars practice. Overall, in both her close readings and her larger cultural analysis, Obert's work is a resounding success.