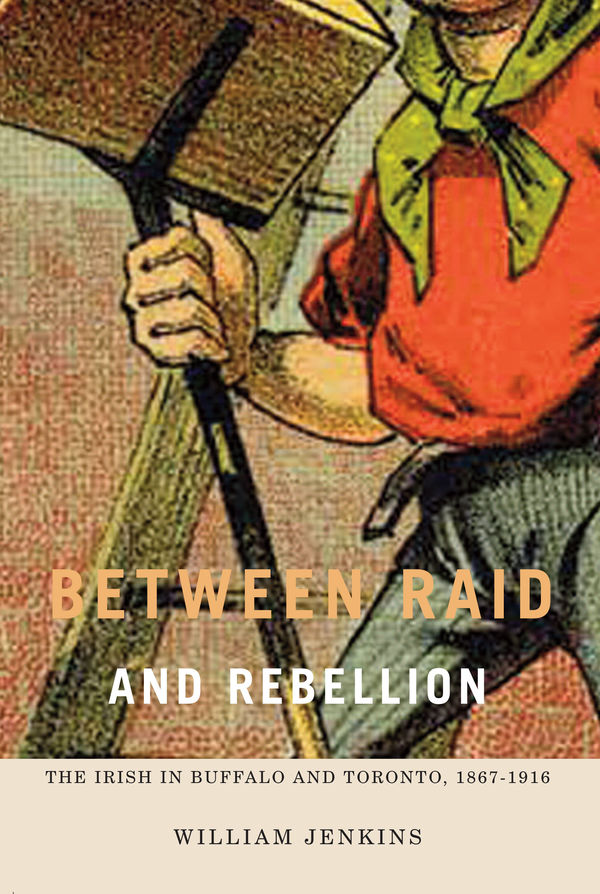 Much of the ground covered in William Jenkins’ new book on the settlement of Irish immigrants in North American cities in the late nineteenth century is broadly familiar to scholars. Between Raid and Rebellion, nevertheless, demonstrates how much more there is yet to mine in the field of Irish American Studies. Taking a comparative approach, graced with a geographer’s eye, Jenkins makes several important contributions to the historiography with this study of Toronto and Buffalo.

One of the challenges of comparative history is selection. Toronto and Buffalo are neighbors on the border between Canada and the United States, and both “came of age” as cities in the period Jenkins focuses on. Both received post-Famine immigrants from Ireland, although Toronto attracted more Protestants while Buffalo was more Catholic. From regional and religious perspectives, the comparison has potential. Jenkins describes Irish settlement and adaptation in these cities toward an understanding of their similarities and contrasts between 1866 and 1916. He argues that where the Irish settled mattered to their sense of identity and politics, particularly when considering Irish nationalism. In this way, Jenkins is challenging the older regional interpretation of Irish American differences that more narrowly described the West Coast as better than the East Coast. That framework was exclusively applied to the United States and to terms of economic advantages. A north-south/cross-border comparison, on the other hand, reveals definitions of being Irish that are complicated by Old World understandings of self and New World political systems separated by less than one hundred miles around the western edge of Lake Ontario. Toronto is somewhere between Great Britain and the United States in terms of freedom and democracy, concepts that Jenkins argues were important to the Irish of all denominations and that directed their destinations in North America as well as their subsequent actions.

To do this, Between Raid and Rebellion draws upon detailed macro and micro samples for Toronto and Buffalo to consider demographics, regional origins in Ireland, and denominational affiliations, among other criteria. Their separate merits are invaluable. But, like Matthew Gallman’s selection of Liverpool and Philadelphia in Receiving Erin’s Children, the comparison—no matter how desirable—becomes strained at times. In the 1870s, the Toronto Irish were 18.4% of the city’s total population while the Irish were only 9.6% in Buffalo, a city that was twice the size of Toronto. Geographical proximity is only so relevant. The number of Irish-born in late-nineteenth-century Buffalo makes it actually more like Montreal while Toronto is more like Providence or Albany. Or, alternatively, Brooklyn and Buffalo are port cities while Toronto and Chicago are regional distribution hubs. In the twentieth century, Buffalo recedes into Toronto’s shadow as a primary destination choice, in which case Toronto then is more like Philadelphia especially for immigrants from Ulster. Choice narrows at the same time that is it necessary for this kind of monograph.

Jenkins describes a “slow-but-steady process of occupational and residential integration” for the Irish that begins in Cabbagetown and the First Ward, before moving outward from these old ethnic enclaves in Toronto and Buffalo respectively (104). Urban, in practice, meant opportunity and for every Irish person who advanced in material terms, there were several riding in his/her wake. Jenkins describes home ownership rates and real estate investment in both cities, and charts the intra-urban movement of the second generation in a series of maps that affirms the general Irish pattern in most studies of the American Irish, ranging from Worcester to New York. This is not to discount the challenges of poverty that have been well documented by historians, but the Irish—Protestant as well as Catholic—can be found at all levels of the nineteenth-century city, and this has too often been overlooked. New definitions of “success” reveal that Irish immigrants have been underestimated no matter where they ended up. Between Raid and Rebellion is one in a number of recent challenges to earlier studies influenced by Handlin and Thernstrom in which Irish social mobility was portrayed one-dimensionally.[1]  New research will continue to bear fruit, and Jenkins’ contribution demonstrates the importance of transcending geographical or political borders when considering the Irish in North America in this respect.

The organization of Between Raid and Rebellion is chronological within an overarching framework of diasporic nationalism, opening with the Fenian incursions into Canada in the 1860s and ending with Ireland’s Easter Rising in 1916. The former precipitated the movement for Confederation and hence a tripartite identity for Protestants who could be Irish, British and/or Canadian as circumstances required. The latter is the culmination of movements for political independence (pursued either constitutionally or militantly) that were transatlantic in scope and particularly resonated with Catholic Irish in the United States. While the Fenian raids and the Irish rebellion bookend Jenkins’ structure, in between he presents his research thematically in nine chapters. The themes are settlement, work, politics (local and diasporic), and networks (religious and secular). The chapters in Part 1 are called “Late Victorian” while those in Part 2 are “Early Twentieth Century,” a break that feels unnecessarily artificial since the book is focused on a discrete fifty year time span and the “fall of Parnell” as the reason for this division is arguable (219). The early chapters lay the groundwork for the continuities and transitions described in the last three chapters. Some seem a little repetitious, especially when a wealth of local detail obscures the strong comparative analysis established in the opening chapters, possibly because five chapters in total are reworked from previously published journal articles that were largely single city studies.

Overall, we learn far more about Toronto than Buffalo in Between Raid and Rebellion. Jenkins documents a Protestant Irish community there using new sources and memorabilia from Ontario to great effect, thereby making it an excellent choice for comparison with any major American city. Its religious distinctiveness among eastern Canadian cities where the Irish settled is also evident from this perspective, making this book essential reading alongside Mark McGowan’s The Waning of the Green: Catholics, the Irish, and Identity in Toronto 1887-1922. Anglican, Methodist, and Presbyterian affiliations determined associational networks and set Irish Protestants apart from Irish Catholics; on the other hand, “class-based sensibilities kept many Protestants from the Orange fold” (143).  So, too, with the Irish heroes and anniversaries marked in Toronto: St. Patrick and Daniel O’Connell remained more ecumenical in an imperial context (in which Catholic representation was still sensitive) than Robert Emmet or July 12 commemorations. Jenkins also makes a strong case for the anti-Home Rule or Unionist perspective of Canadian Irish Protestants that contributes balance to the American Irish nationalist interpretation. A 1914 Toronto Sentinel advertisement for a plaster statuette of Edward Carson concisely illustrates this; it reads “if you are a true Orangeman you will show your appreciation of this great man’s work by displaying his likeness in your home” (reproduced in Jenkins, Between Raid and Rebellion, 340). Whatever support there was for Carson in the United States at this time, it certainly could not be commercialized in this way and, ultimately, that speaks volumes about Irish differences in North America.