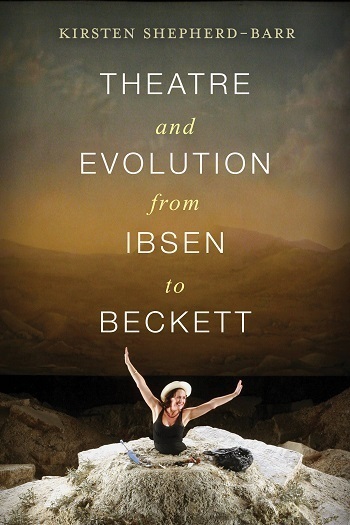 At a Samuel Beckett conference in Halifax, Nova Scotia a couple of years ago, a young science student from the USA presented an interesting paper on the correlation between the concept of the “embarrassed” caterpillar, which Charles Darwin coined in The Origin of Species, and the use of repetition in the works of the Irish author. Fearing that he may lose his audience of Humanities scholars, the young man illustrated his talk by referencing the children’s book The Very Hungry Caterpillar by Eric Carle. I thought of this incident while reading Kirsten E. Shepherd-Barr’s Theatre and Evolution from Ibsen to Beckett not just because its author also references the same example from Darwin but also because both the conference presentation and book highlight, in very different ways, apparent difficulties which are frequently encountered when attempting to make clear interdisciplinary connections. Should one go down the Hungry Caterpillar route and lead an inexpert audience by the hand through comedy and lateral thinking or should one expect the reader to cope with a paradigm that is outside of its regular field and make no allowances? Unfortunately, despite admirable scholarship in the two disciplines which she examines, I think Shepherd-Barr misses the opportunity to make the brilliantly simple connection of drawing together the ambitious speculations contained in her monograph as elegantly as our young American friend did in Halifax.

In the book, Shepherd-Barr devotes three chapters to assessing the impact of evolutionary theory on the nineteenth-century stage. The first describes its various depictions in popular entertainment while the second provides a survey of its appearance on the formal stage in England and the USA. The subsequent chapter is devoted to examining Ibsen’s engagement with the theory. Three further chapters address drama in the twentieth-century under the individual thematic headings, including representations of “the maternal,” eugenics on the Edwardian stage, and issues of reproduction and how they are depicted. A whole chapter is devoted to the twentieth-century American stage, with particular emphasis on Susan Glaspell and Thornton Wilder, followed by a single chapter on Samuel Beckett. A short epilogue entitled “Staging the Anthropocene” is added at the close.

The author’s stated intention is admirable as she attempts to do for drama what has been already achieved in relation to other genres. She cites the studies by Gillian Beer, George Levine, Gowan Dawson, and John Holmes, which examine evolution in relation to the novel and to poetry, and she asserts her own work as a complement for the field of drama. The strength of the book can be found in its initial outline of the breadth and complexity of nineteenth-century evolutionary theory. This piece is elegantly set out, giving a lucid description of the ideas of Darwin and their development and adoption through engagement with the ideas and writings of Jean-Baptiste Lamarck, Ernst Haeckl, Gregor Mendel, and Max Nordeau. The complexity of the reception of these ideas by their audience, as well as their effect on cultural thought in general is handled skilfully, clearly and with nuance. The author properly draws attention to the dangers of interpreting the influence of ideas without proper context by using the example of the broad acceptance of the idea of “survival of the fittest,” which was being misinterpreted as an ideology of “a willed and cruel destruction of the weak by the strong” in a Broadway play of 1890 (37).

Shepherd-Barr’s work is also enhanced by the fact that its surveys of each of the distinct eras of nineteenth-century theater are so detailed. A particularly engaging section is an analysis of representations of physical disability on the Edwardian stage. Taking as a starting point Arthur Wing Pinero’s The Freaks (1918), Shepherd-Barr traces the development of the sympathetic portrayal of “deformity” and “disability” in the context of the greater visibility of differently-shaped and emasculated bodies in the aftermath of the Great War. She argues, convincingly, that such works altered “Victorian fascination with human anomalies as a link to our evolutionary origins” by replacing it “with a curiosity about otherness[and] disability” (156), using the vernacular of the low-status freak show from the vaudeville and carnival in the “respectable” theater. In fact, her insistence that the whole of “performance” in Victorian society be addressed as a context for assessing theater as a space for social and scientific commentary is compelling. She affords popular spectacle such as melodrama, pantomime, music hall, fairground, and circus an important role in the development of any dramatic discourse on science within society. The Victorian passion for “curiosity” ranging from public scientific demonstrations to freak shows, she suggests, is central to any understanding of theatrical philosophical meditation as it was through the medium of spectacle that the audience already received most of its scientific education. Although this point is well made and well-illustrated, the author stretches it to breaking point by trying to demonstrate its effect in her analysis of any and all of the playwrights she addresses subsequently. As a result, for example, she attempts to connect Darwin and Beckett solely through their interest in popular theater: “Beckett famously draws on Charlie Chaplin’s and Buster Keaton’s silent film work, Darwin preferred entertaining theatrical fare such as the equestrian melodrama” (247). This piece of information is interesting in itself but is hardly unique to both nor is it a crucial evidential link.

It is, perhaps, Shepherd-Barr’s search for such evidential links that is one of the most frustrating aspects of this book. A detailed analysis of Ibsen’s possible engagement with Darwin’s writings fails to find specific evidence of the Norwegian having read Darwin. However, her meticulous survey of Ibsen’s works and drafts unpicks the threads of evolutionary theory at their core, making a coherent argument for the impact of the philosophy on the writer without the requirement of a verifiable instance of a direct reading by one of the other. The long description of the ultimately futile search for the one piece of conclusive evidence linking one to the other is given so much space and weight that it obscures the more important and plausible philosophical connections between both. For example, the most compelling argument that Shepherd-Barr raises is that the whole idea of the nature of family, central to Ibsen, is fundamentally defined by a world post Darwin. Unfortunately, this point is almost thrown away in the detail.

Although bookending the title of the book with two of the most significant figures of modern drama serves to provide a neat timeline for the scope of the project, the author necessarily affords a particular weight to the works of Ibsen and Beckett. Such prominence does not serve her well in the case of assessment of Beckett’s work, however. She ends a broad literature review with a criticism of those genetic Beckett critics who Shepherd-Barr imagines are engaged in “attempts to police the boundaries of Beckett studies” (242). This is a common enough complaint in the area, yet the examples she cites seem to me to merely caution against the very over-interpretation which she herself derides elsewhere in her text. The resulting reading of the works appears too speculative and at odds with the rigour with which other playwrights are handled. For example, in her discussion of Happy Days (1961), she imagines Willie’s appearance to be ape-like merely on the basis that he is dressed in full dress suit with bow-tie and is therefore “evoking chimps put on show in circuses” (258). As a consequence, she is minded to link the entire play to Franz Kafka’s short story, “A Report to the Academy” (1917), for no apparent reason or no other apparent evidence. The entire Beckett section also appears unbalanced as possibly fruitful avenues of exploration are shut down without being fully developed. A chapter sub-headed “Symbiosis and Antagonism” receives only one page, for example. This unevenness is frustrating as particularly important ideas are raised by the author, such as in her reading of Beckett’s interest in geology as being too often misinterpreted as a metaphor rather than an “interest in geology for its own sake” (247). This might have been a starting point for a fruitful meditation on the role of physical geography in Beckett’s work but the idea is dropped too quickly and the opportunity is lost.

It is rare to find writing so readable in an interdisciplinary work and that is why it is disappointing to find fault with Shepherd-Barr’s book. Its legacy should be the brilliant concision of its description of Darwinism and its effect, which should provide the starting point for any future work in the area. It is also unfortunate that the excellent analysis of various modes of popular entertainment is undermined by the uneven survey of the works of later dramatists and, in particular, Beckett. The fault may lie in its scope and ambition, which are admirable but which might be too broad to do justice to the fundamental idea.