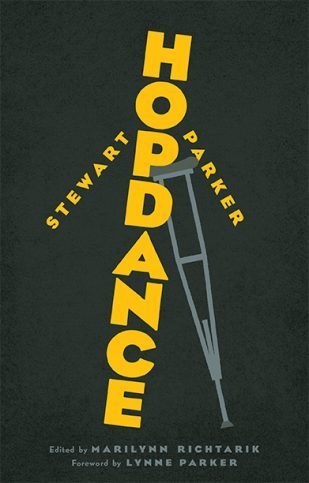 November 2018 will mark the thirtieth anniversary of Parker’s death. Though chiefly remembered as a writer for the stage, as the years have passed, a fuller appraisal of his talents has been afforded by the publication of his prose, journalism, and screenplays, as well as Marilynn Richtarik’s scholarly devotion to his memory. With the exception of several radio plays, Hopdance is likely to be the last of Parker’s unpublished work. The novel processes Parker’s first encounter with cancer in 1961 when, as a nineteen year old university student, his left leg was amputated as a result of a bone tumor. In a pivotal chapter in her meticulous biography of Parker, published in 2012 by Oxford University Press, Richtarik assembled family's and friends’ memories of this traumatic period with extensive quotations from the then unpublished manuscript. Now, for the first time, readers can peruse Parker’s novel in full for themselves.

Hopdance, initially titled Caution in the Traffic, Prudence in the Rain, was composed a decade after the diagnosis and surgery and at a point when the recurrence of the cancer was unlikely. While Parker was physically in the clear, the novel vividly communicates a visceral impression of psychic turmoil, only partially shielded by self-deprecating, bleak humor. As Richtarik describes in her “Note on the Text,” Parker completed a first draft of the book in 1973, but soon turned his attention more fully to his dramatic writing. He sporadically revisited the project with the intention of revising it, yet had made little substantial progress by the time of his death. So, in a fundamental sense, this is an unfinalized work; nevertheless, its distinct tone and somewhat loose shape are brought into focus by Richtarik’s careful framing and clarifying editorial interventions.

While one might read Hopdance with an eye on student life in Belfast in the early 1960s or on Parker’s juvenile views and influences, pulsing at the center of the novel is the matter of pain—its imperative force and the protagonist’s efforts to find a means of articulating its impact upon him. Consequentially, it is a work that contrasts with much of what we might usually associate with Parker’s literary/dramatic concerns, and it sheds some further light on their germination. The question of how, or even if, pain can be voiced is one that has engaged scholars well before the theoretical “turn to affect” in Western theoretical discourse of the twenty-first century. In her 1985 book, The Body in Pain, Elaine Scarry explores the keen challenges presented by physical pain, how its apparent voicelessness gives rise to profound difficulties in political, conceptual, and creative responses to it. Indeed, more recently, Fionnula Dillane, Naomi McAreavy, and Emilie Pine pick up the threads of this debate to observe in The Body in Pain in Irish Literature and Culture (2016) that, though “the affective experience of pain” (3) may never be adequately expressed in words, they help us map its shape in ways that, however insufficient, are vital and regenerative.

The novel opens with a finely-honed scene in which Tosh, Parker’s alter ego, makes his way to the hospital gym for the first time since the surgery. His gaze lands suddenly on a “spectral stranger” observing him and is inexorably drawn to the “gross blue knot dangling from the blunt stump fat with its bandages, the one fat thing, gorged full on its own blood” (5). It turns out to be his own arresting reflection. The protagonist is momentarily “transfixed” by his uncanny and abject body, before swerving away into scenes from his past and future. Verbs accentuating strained, jagged, or unplanned movements proliferate throughout the text: Tosh “tunnels,” “bundles,” “scuffles,” “heels round,” “staggers,” “sheers off,” “lunges,” “poles” his way in various directions before a final episode, in which he sits on the ground to share a smoke and his story with a one-legged beggar. This encounter brings him once more to a stationary position.

Parker builds the narrative with a mosaic of non-chronological episodes assembled in two main sections. This bi-part architecture not only suggests a before and after arrangement, and perhaps an ironic nod toward an illusory biped stability, but also multiple other binaries (body/mind, innocence/experience, abled/disabled). However, these stable binaries are radically disrupted, under erasure, or subject to ironic strain repeatedly throughout the story. Indeed, in christening his lightly fictionalized self as Mr. Nonsense (Tosh), Parker overtly refuses to occupy the role of a romantic hero too seriously. Even the before and after structuring of the narrative is not hermetic; the first part of the text is already conditioned by the effects of Tosh’s operation, as if the pain visited upon the body eddies back through all aspects of a reconstruction of preceding events as well as, more predictably, surging forward to all subsequent experiences. The affective impact thus ripples through the form and the content of the narrative that Tosh/Parker attempts to piece together. Strikingly, Tosh wrestles with insulated neatness of mind/body duality—“Is this me, this head voice? Are you Tosh, hey? That warm bath with the wound in its middle down there. That is your body. That’s you too. Where do I end? Your shaved off stubble, is that part of this body dragging me down? There, I don’t think of it as me, I objectify it. But other times I do, when you come, when you swim. Voice immersed in body. Then I love it. Bodies. I could cry for bodies. If this one’s eye weren’t parched” (29). The flux of pronouns in such interior monologues deliberately complicates any easy presumption of rational safe distance or superior knowledge; body and mind roil together.

If Tosh/Parker’s dissatisfactions with student life, sex, his interactions with professors, and creative activities are at times rather overindebted to James Joyce's A Portrait of the Artist As A Young Man, or suffer from a lack of concerted literary development, the value of Hopdance lies in the protagonist’s attempt to capture something of the absurd nature of his situation and how these efforts unfurl greater realizations. The scenes depicting his initiation into the world of prosthetic limbs toss up some poignantly grotesque moments of comedy and unexpected conclusions. As he sits with fellow amputees in the Limb Workshop, Tosh finds himself “fascinated by how their appearances from the waist up, including his own, proclaimed an almost caricatured identity; whilst from the waist down, they were equally trouserless, each one with one whole and hairy leg and one longer or shorter stump of its fellow” (105). What he comes to realize is less his own exceptionality, than how suffering illuminates that “we’ve got everything in common including a conviction of personal uniqueness” (111)—it is radically democratic.

Following Richtarick’s conclusions, it seems clear that Parker had originally regarded the text as of therapeutic value but remained uncommitted, or at least ambivalent, about working it up into a final form for publication. And yet, in this elegantly presented edition by Lilliput Press, Hopdance is remarkably readable. Above all, it provides a resonant and suggestive account of Parker’s reckoning with the traumatic loss of a part of himself, quite literally, and of creatively coming to terms with his own mortality in a manner that has direct, if implicit, bearing upon his better known, subsequent work. It certainly deserves more attention.