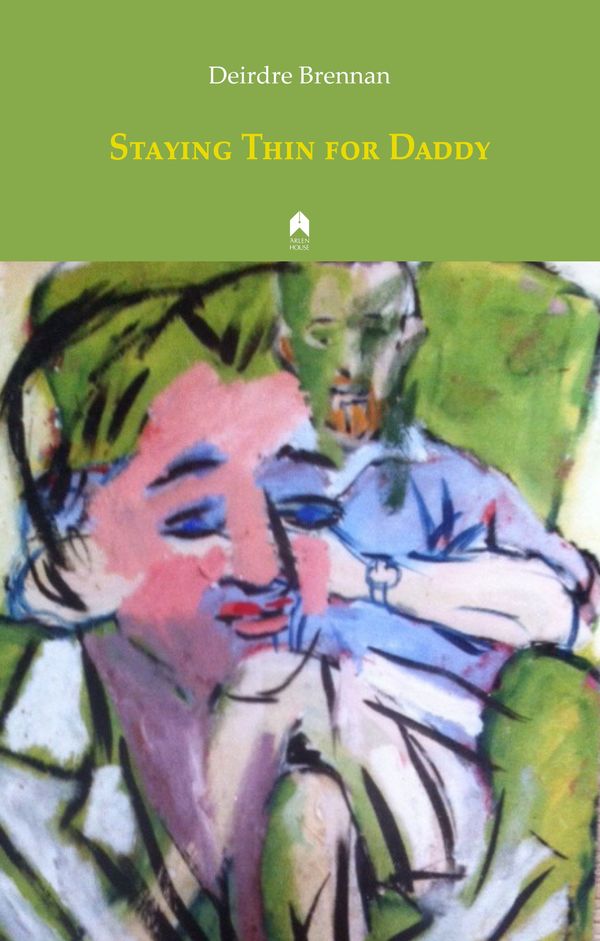 Staying Thin for Daddy is the first collection of short stories published originally in English by bilingual County Carlow poet, dramatist, and short-story writer Deirdre Brennan, even though she did translate many of them from the Irish into English. However, the focus of these brief, sometimes sardonic stories is far remote from any concern with national or linguistic identity. They each provide, instead, cunning investigations of that most fascinating topic of all: the awkward, twisted, and often destructive relationship between a man and a woman.

With a style reminiscent of both Roald Dahl in its cruelty and Raymond Carver in its creation of uncanny situations, Deirdre Brennan places her characters amidst a full array of painful, embarrassing, and foolish situations in which couples may ordinarily—or not so ordinarily—find themselves. A woman, for example, finds out that the boss with whom she is sleeping is married with children. Another faces the fact that her lover has other women in his life. What’s more, she learns that one of the other women's husbands had an affair with a priest on their honeymoon.

However, Brennan's intention is not to depict her characters simply as victims; quite the contrary. Her style, which often uses first-person narration or an equivalent point of view, sheds insight into the frail, naive, self-indulgent, and sometimes masochistic personalities of her male and female characters who are faced with their partners’ infidelities. The female characters are often guilty of naivety as they discover the true status of their relationships only after it is too late, and can only berate themselves for their lack of foresight. Certain phrases to this effect recur repeatedly throughout the stories: “How could I have been so naive, so blinkered?” (“Cher Antoine” 14), “You could say I was an innocent abroad” (“Fern” 37), “I was so blind. There it was under my nose all the time” (“Wives” 60), and “She felt mortified by her trust and gullibility” (“Forgiveness” 115). These characters’ naivetés spring from the fact that they start out in life with often self-deluding dreams and illusions. Men and women tell themselves lies about the love they feel for their partners, when they are sometimes, in fact, compelled to enter into relationships out of loneliness or need. Sometimes, they indulge in self-aggrandizing fantasies, as when characters dream of becoming artists. In one exemplary interior monologue, Brennan seems to mock these aspirations—mocking perhaps herself, as a writer—in passing: “Better again he might have been a writer. Barry Watson, the novelist, winner of the Whitbread, the Booker, Aer Lingus and Irish Times literary awards” (“Making a Break” 175).

Once characters have slipped into long-term relationships, either by choice or by sheer accident, they soon either succumb to bordeom or grow pathologically suspicious of their partners’ loyalties. Women often have to put up with their spouses’ eccentric hobbies, as exemplified by the partner who watches John Wayne movies all day (“The Couch Potato”), the boyfriend who obsessively plays Snakes and Ladders (“Diceman”), or the husband who breeds dogs for pet shows and appears to favor his canine companion to his wife (“A Master of Ring Craft”). These male partners may be toxic and manipulative, but the women in the collection are all too ready to submit themselves to their lovers’ whims and to sacrifice their happiness, freedom, and self-respect, despite the fact that these men will ultimately exploit and even destroy them (“Dwayne,” “Forgiveness”). Yet if marriage often turns into a sado-masochistic game for two, celibacy is nevertheless regarded by some of the female characters as the ultimate misfortune, so much so that in some cases, such women take refuge in forms of denial verging on sheer neuroses, pretending that they enjoy being single or even making up imaginary companions (“The Blue Danube,” “The Venus Trap”).

When not portraying family life from the point of view of a husband or a wife, Brennan adopts the perspective of their children. Thus, men are liable to wreak as much harm upon their daughters as they do upon their partners, manipulating their feelings as is the case in the titular story, “Staying Thin for Daddy,” in which a father withdraws his affection from his daughter after she has put on too much weight. In “Fern,” the brutal first-person narrator tears his own daughter away from her English mother and sends her to live with a couple of strangers in Ireland. Thus, unreliable, feckless fathers pass on to their daughters a hereditary pattern of male betrayal and female vulnerability. This legacy will likely persist with them for life, as in “The Glass Book,” in which the abandoning father offers his daughter a bottle of perfume ironically called “Great Expectations.”

Family life in the collection invariably breeds skeletons in the closet, as in “The Secret,” where the neighbors in small-town, rural Ireland are all too pleased to reveal secrets to eager ears. If women contribute to their own misery out of psychological blindness or emotional need, sometimes scheming relentlessly to obtain what they want, they nevertheless must often bear the brunt of the aftermath of dishonest relationships. For example, women in these stories face unwanted pregnancies (“Dwayne”), even if they also use child-bearing as a devious way to entrap a husband (“Wives”).

As these stories demonstrate, relationships between men and women, according to Brennan, generally reach high levels of toxicity, sometimes amounting to all-out battles in which each partner tries to be the first to get at the other's throat. The endings of the stories, which often contain climactic twists of fate, show that the biter is often the one bit. What's more, toxicity sometimes takes on gruesomely literal meanings, as in “Cher Antoine,” where the hoodwinked female narrator who tried to drown herself is ultimately rescued, but finds herself poisoned by the water of the canal into which she has jumped.

Even though Brennan's style is sober and concise, favoring a form of minimalism and dryness reminiscent once again of Carver, the down-to-earth, unpoetical tone of the stories often charges atmospheres with a sense of the surreal and uncanny. This tone is further imbued with almost gothic images, such as in “The FOR SALE Notice,” in which the narrator’s house is invaded by caterpillars: her “fairy-tale cottage…now a nightmare house” (109). Once-innocuous people and things, like the swans the protagonist enjoyed feeding in the company of her father in “Staying Thin for Daddy,” metamorphosize into dangerous predators. We see this transformation again in ”The Banana Banshee,” when the tattoo-artist lover appropriates his partner's body as a canvas to cover with his own writing. This touch of the supernatural is perhaps the most obvious marker of Brennan's Irish heritage, which she combines with ironic distance, as suggested in the title, “The Banana Banshee.” At the same time, this aspect of surreal irony may be interpreted as a warning to the reader to not take the stories’ narrators at their words. Their mental conditions are sometimes questionable and their reliability is often dubious. Thus, through the uncanniness of the stories of Staying Thin for Daddy, Brennan craftily indulges our taste for cruelty and even slight repulsion in a way that might resonate familiarly, too close for comfort.