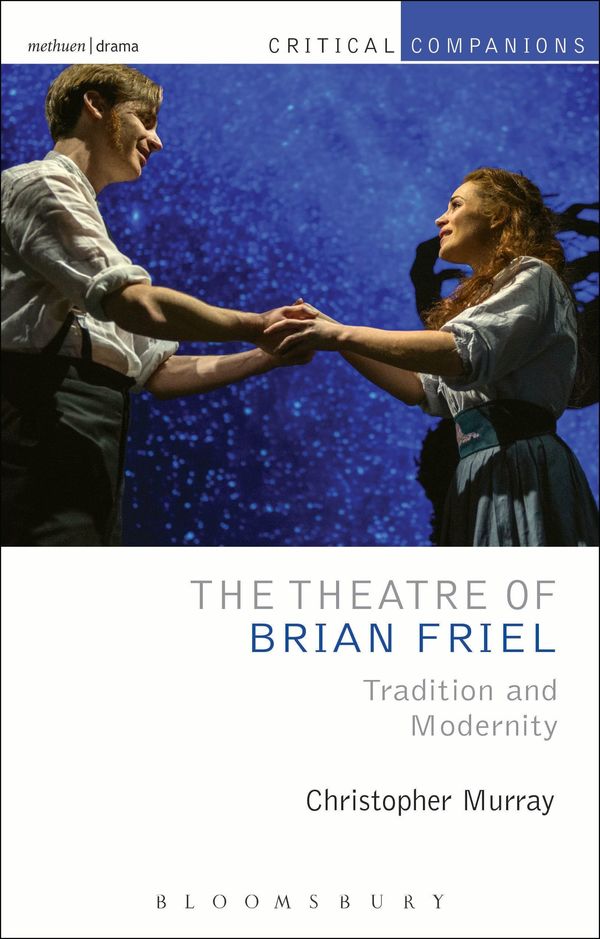 At the age of 86, with 21 full-length original plays, 9 adaptations, and a growing body of criticism—Murray’s is the fifth book on the playwright within a three year period—Brian Friel is a commanding figure within contemporary Irish theatre. How is such a substantial body of work and its interpretations to be comprehended in a monograph designed as a general overview? Murray’s choice is to pick out key texts in chapters that are organized in a partly chronological, partly thematic pattern.

So, more or less inevitably, an early chapter is devoted to Philadelphia Here I Come! as Friel (and Gar O’Donnell’s) “coming of age” (12-27). Two of the less successful plays of the 1960s, The Loves of Cass McGuire and Crystal and Fox, are studied as examples of Friel’s willingness to risk unpopularity with experimental aesthetic forms. While The Freedom of the City and Volunteers provide evidence of Friel’s “theatre of commitment” (56), Living Quarters and Faith Healer, also from the 1970s, dramatize the “uncertainty principle” (70).  Here, though, Murray daringly leaves the chronological track to set up “a kind of trilogy” in the history plays Making History, Translations, and The Home Place, which are studied not in the sequence of their composition but in the period of their settings (93). Aristocrats, Dancing at Lughnasa and Molly Sweeney are similarly gathered together for their common Chekhovian exploration of issues of gender. Wonderful Tennessee and Give Me Your Answer Do! are expressive of Friel’s critique of “the vodka-and-tonic society” of 1990s Ireland (156). While Performances, that late chamber-play about chamber music provides the springboard for a general conclusion. Within this framework, Murray deftly weaves in biographical details and less detailed treatment of the other plays, along with scrupulous acknowledgements of his fellow critics.

Murray is peculiarly well qualified to write this book. He not only knows Friel’s work extremely well, having edited the very valuable collection of Brian Friel’s Essays, Diaries, Interviews 1964-1999 (Faber, 1999), but the whole range of Irish and European theater. So he can make connections between Philadelphia and Johnny Murphy’s now forgotten Abbey play, The Country Boy (1959), and point to the analogies between Wonderful Tennessee and Bernard Farrell’s highly popular I Do Not Like Thee Dr Fell (1979). We are shown how Maurice Materlinck’s Les Aveugles provided a precedent for the “drama of the interior” in Molly Sweeney, while unexpected echoes of Macbeth are heard in Faith Healer (149). Murray’s master argument, in fact, suggested in the book’s subtitle, is the relationship in Friel between tradition and the modernity to which he adapts it. So there is stress on Friel’s training in the primary value of eloquence during his time as a student at Maynooth, which he had first entered as a seminarian. Friel, it is argued, followed his mentor Tyrone Guthrie in seeing the centrality of ritual in theater, but in his drama they are failed rituals subverted in the conditions of modern living. Philadelphia is in some ways a quite conventional play about emigration, as in Murphy’s Country Boy, but Friel’s dramaturgical technique creates an inner psychodrama comparable to Miller’s Death of a Salesman. A metadramatic awareness, stimulated by Pirandello and Thornton Wilder, is everywhere in Friel. In Faith Healer, as in so many of his plays, according to Murray’s reading, Friel’s concern is with “the problem of writing tragedy in modern times” (70).

Friel is seldom thought of as an autobiographical writer, with the obvious exception of Lughnasa. But Murray quotes a suggestive comment by the dramatist about the relationship between life and art: “a play offers you a shape and form to accommodate your anxieties and disturbances in that period of your life you happen to be passing through” (146). This is locally related to the eye surgery that Friel underwent close to the time he wrote Molly Sweeney, raising the specter of blindness for him. However, it can also be applied more broadly to the ways in which Friel’s drama arises out of the political and intellectual concerns of a given moment. This is most obvious in Freedom of the City, which Friel himself later came to feel was written too immediately in the wake of Bloody Sunday to achieve a distance from the event; Murray argues, in fact, that it is only in the period since the 1998 Good Friday Agreement that plays such as this and Volunteers can be appreciated, as time has removed them from the political controversies that inspired them.

The Theatre of Brian Friel brings out, also, how pervasively the playwright’s reading shaped the plays of a specific period, and how eclectic that reading was. Freedom of the City may have been driven in part by a sense of outrage at the report of the Widgery Tribunal, its evidently biased findings quoted in only slightly distorted form in the text. But there are equally direct quotations from Oscar Lewis’s La Vida (1966), an interview-based study of Puerto Rican urban poverty in the US. Similarly, Translations brings together materials from P.J. Dowling’s The Hedge Schools of Ireland, J.F. Andrews’ study of the Ordnance Survey of Ireland, A Paper Landscape, and George Steiner’s After Babel—Friel famously has the drunken Irish schoolmaster Hugh ventiloquize the modern European theorist of translation. Maire Mac Neill’s The Festival of Lughnasa lies behind Friel’s Lughnasa; the work of the popular psychologist Oliver Sacks provided the starting-point for Molly Sweeney; and Performances is substanially based on the Intimate Letters of the Czech composer Leoš Janaček. Ideas, phrases, whole lines taken from Friel’s reading are patched into the plays.

One of the features of the Methuen Drama Critical Companions series in which this book appears is a final chapter of “Critical Perspectives” with three essays by other writers supplementing or contrasting with the views of the main author. For instance, in the final piece in the book, Csilla Bertha examines the use of music in The Home Place in terms of the memory theories of the French historian Pierre Nora. While Murray argues for a tension between the postcolonial and the postmodern in Friel, Shaun Richards, in his carefully argued essay on Translations, Lughnasa and Wonderful Tennessee, puts the emphasis firmly on the postcolonial. Most courageously, Murray includes the David Krause’s critique of “The Failed Words of Brian Friel.” Where Murray stresses Friel’s eloquence, Krause argues that his fluent style is achieved at the expense of individual characterisation; while Murray brings out the intellectual sophistication of Friel’s ideas, Krause maintains that in a play such as Wonderful Tennessee, they smother the drama. And while Krause grants the theatrical achievement of Lughnasa, he claims it allows the audience to leave with the feel-good sensation that “dance conquers all,” a reading Murray very specifically challenges in the body of the book. Probably few readers will be entirely convinced by Krause’s captious attack, but it certainly puts a sting in the tail of this otherwise admiring, appreciative and extremely well-informed study of the theater of Friel.

The Methuen Critical Companions are each designed to provide an authoritative and comprehensive analysis of the work of a single modern playwright and, as such, are presumably intended for students and that most elusive of beasts, the general reader.  Murray’s book on Friel fulfils that brief admirably. There are new insights here for those who know Friel’s plays well but a sound introduction for others who may be coming to him for the first time. By its combination of a chronological and thematic approach, it contrives to avoid a pedestrian plod through the life and works, its master argument capacious enough to include the many different ways Friel has adapted tradition to the conditions of modernity. The Friel that emerges from Murray’s book is a playwright of ideas, a literary playwright for whom language is all important, whose career has been dedicated to the development of an “aesthetic of modern tragedy” (46).