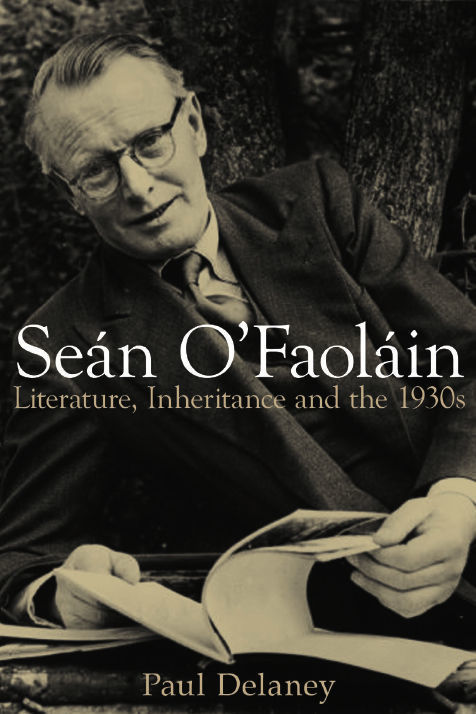 In a very critical review of M.J. MacManus’s sympathetic biography of Eamon de Valera in 1945, Seán O’Faoláin was typically scathing of the prevailing intellectual, social, and political conditions in Ireland at the time. In this blistering attack on de Valera’s supposed commitment to a rural Gaelic and Catholic idyll and MacManus’s “apologia,” O’Faoláin drew on a series of flamboyant metaphors that played mischievously on the then Taoiseach’s roots in the village of Croom in rural Limerick. In the pursuit of power in the 1930s, O’Faoláin claimed, the Fianna Fáil Leader had opted to “hitch his star to a Croom milk wagon” and expected all his people “to crowd into it contentedly.”[1]

Paul Delaney’s Seán O’Faoláin: Literature, Inheritance and the 1930s revisits O’Faoláin’s troubled relationship with 1930s Ireland; retrospectively and somewhat questionably modelled today as “De Valera’s Ireland.” The book is organized in two parts. The first of these (chapters 1-3) explores O’Faoláin’s influential series of political biographies, mainly on Daniel O’Connell, Constance Markievicz, and de Valera himself. Delaney convincingly argues that these were primarily “works of the imagination” based on the flimsiest of historical research and whose primary aim was not in any case historical but rather to “write the past in order to comment on the present” (46-7). As Delaney points out, this is made all the more questionable since O’Faoláin’s biographical writing is frequently “couched in the language of objectivity and ‘cold truth’ but carrying its own agenda” (46). The book’s second part (chapters 4-7) turns to O’Faoláin’s works of fiction in the 1930s—the volumes of short stories and novels for which he is still best-remembered today. A recurring theme here, according to Delaney, is O’Faoláin’s attempt to make sense of the inward-looking, essentially shapeless conservative order of the 1930s. This is achieved by a conscious rejection of the romantic literary urges of the pre-revolutionary Irish Revival in favor of the devices of “realism,” “naturalism,” and especially “historical fiction.” These allow O’Faoláin to explore the pre- and post-independence period with a more somber eye as his principal characters—like their creator—experience a journey marked by crushed idealism and, ultimately, disillusionment at the political and social world around them.

Disillusionment at de Valera’s “milk-wagon Ireland” are of course well-worn paths in the existing literature on O’Faoláin. The originality of Delaney’s book is to be located rather in his particular exploration of the idea of inheritance in O’Faoláin’s work in the 1930s and the patterns of consensus and conflict that it provokes at the level of the individual and the community. Setting out his stall in the introduction, he maintains that too many of the existing studies of O’Faoláin pigeonhole his critique of post-independence Ireland with ideological labels—“liberal pluralist” or “proto-revisionist” for example—that lead to a treatment that ultimately fails to do justice to the variety and richness of his writing (7). Drawing on Frederic Jameson’s idea of the text that is “already read” before the first encounter, he claims that previous scholarship on O’Faoláin is too often “already invested with a series of associations that suit the interests or preconceptions of those who come to it” (6). By contrast, Delaney maintains, that his study is informed by “a close reading of the principle texts” (7). This leads him to the relatively novel conclusion that, in the 1930s at least, there is no real consistent perspective adopted in O’Faoláin’s writings, not even, an outright rejection of Irish nationalism and the Ireland it had created. Thus, ambivalence becomes a further key organizing principle of Delaney’s text as he notes that “one of the great sources of tension in O’Faoláin’s work… [is] his attraction to, and simultaneous repulsion from, the codes of Irish life” (33).

These organizing ideas of inheritance and ambivalence produce a rich exploration of O’Faoláin’s writings of the period. This is particularly the case in relation to Delaney’s treatment of O’Faoláin’s troubled relationship with Irish nationalist ideology. Here, it is important to recall that O’Faoláin played his part too in both the struggle for independence and the civil war as IRA volunteer and anti-Treaty propagandist in the 1920s. Rejecting earlier studies that characterized O’Faoláin’s work as “Parnellite” (O’Brien, 1956; Harmon, 1966) or “liberal internationalist” (Arndt, 2001), Delaney demonstrates how O’Faoláin’s fiction in particular can be characterized as exhibiting a strong degree of uncertainty on the contemporary nationalist pieties of his people that fits neither of these interpretations.

Thus, he takes issue with Maurice Harmon’s claim that the old Parnellites in his novels, A Nest of Simple Folk (1933) and Bird Alone (1936), are given a sympathetic treatment by their creator that foregrounds how their nationalism “brings out greatness of character” and the integrity to “resist the restrictions placed on their lives by society, politics and religion” (205). The old Parnellite “grander,” Phillip Crone, in Bird Alone, Delaney maintains, is rather more often depicted as an “exploitative, controlling presence,” particularly in his relations with his young and vulnerable grandson where the “elderly figure is frequently cast in a sinister rather than a valiant or constructive light” (205-6). Indeed, for Delaney, O’Faoláin’s “poetic realism” (150) incorporates a “realist” attempt to shed light on the sinister character of Irish revolutionary nationalism, which is nonetheless offset by romantic and sympathetic tendencies in his construction of some nationalist and even clerical characters. Thus, the IRA man, Stevey Long, in a story of Midsummer Night Madness (1932) is portrayed as “an uncouth cowardly villain” who uses the local battalion of the IRA to settle personal scores” (162); while the priests in A Purse of Coppers may be “part of an institution that is repressive and power-driven,” but also, come across at times as “sensitive and humane” (238).

The treatment of the two de Valera biographies will also be of particular interest to those who have viewed O’Faoláin as a prominent dissident intellectual in de Valera’s Republic by the late 1930s. The first biography, The Life Story of Eamon de Valera (1933), Delaney reads—as most other commentators have—as nothing short of a work of hagiography. His interpretation of the second biography, De Valera, (1939), however, is somewhat at odds with previous studies in that it seeks to redress the idea of this work as a damning critique of de Valera and, by extension, his dreary bucolic republic. Picking up on O’Faoláin’s declaration of his republican credentials in the text (120) and the wholesale transfer of passages from the earlier sycophantic account of 1933, Delaney suggests that O’Faoláin’s criticism of the Fianna Fáil leader in the 1939 text “is qualified” and “never as simple as O’Faoláin pretended or as is often supposed” (135). This ambivalent reading seems something of a stretch and appears to overlook the possibility that O’Faoláin could actually draw on republican ideas to challenge rather than sympathize with de Valera’s brand of nationalism.

Delaney’s analysis of the Markievicz biography, Constance Markievicz (1934), by contrast, seems to be on somewhat firmer ground. Here, he pulls no punches, demonstrating how O’Faoláin’s text suffered from a rather unreflective post-colonial continuity in its depiction of Markievicz as yet another Irish revolutionary dominated by emotion and racial instinct rather than intellect (67). Indeed, he finds this regurgitating of the racial stereotyping of colonial accounts of the Celt and Gael to be a nefarious and common pattern across O’Faoláin’s political biographies. It is particularly prevalent in his exaltation of O’Connell (King of the Beggars, 1938) where, Delaney points out, O’Faoláin paints a somewhat questionable picture of a “Liberator” who established a modernist and democratic tradition in Irish history by rejecting outright the archaic, elitist, and degenerate Gaelic Order (91-6).

In Constance Markievicz this tendency to exonerate the colonizer and blame the colonized is, for Delaney, married to a series of “sexist inanities” in which Markievicz is too often treated with “smug condescension” as a mere woman, bereft of reason and intellect and enjoying the thrill of dressing up in military garb and the drama of revolution (63-6). In what is a particularly revealing aside for Delaney, O’Faoláin thus notes, “Constance Markievicz, in her woman’s way, had no intelligible ideas but many instincts” (69). To his credit, Delaney is careful to offset this criticism by pointing out that O’Faoláin was among the few Irish male writers to join Maud Gonne and Dorothy MacArdle in condemning the reactionary account of the role of women in de Valera’s 1937 Constitution and his thoroughly “unrepublican” refusal to include an article according women full equal rights (134).

The focus on such aspects of O’Faoláin’s work are, no doubt, a reflection of Delaney’s own particular contemporary interests and reveal that despite the claims to avoid “already-read” approaches in his introduction, there is always a limit to such enterprises. As his subject might well have asked, can any man ever really “jump of his own shadow?” Notwithstanding these misgivings, there is no doubt that Delaney’s reluctance to reach for any easy categorization of O’Faoláin does allow him to bring out hues and shades in the full spectrum of his writing that have remained somewhat obscured in earlier studies. Moreover, the book is particularly welcome since, as Delaney notes, O’Faoláin’s work has been somewhat overlooked in the field of Irish studies for too long. This is no doubt a consequence of the dominance of other more talented writers of fiction among his contemporaries, but also, O’Faoláin’s rather unappealing attempts in his more polemical writings to strike the Yeatsian poise and to draw somewhat unreflectively on colonial stereotypes of “the Irish” and “the Gael” noted above. In doing so, of course, he resorted to exactly the same kind of unconvincing reductionism in relation to the political and cultural world of “De Valera’s Ireland” that he found so distasteful in other more sympathetic writers. It could hardly have been otherwise for this new generation of post-colonial critical writers who struggled to find a new and appropriate mode of address to engage with a state and society that required, above all, critical minds. Paul Delaney’s book illustrates once again that O’Faoláin was among the most courageous and intellectually engaging critics of Irish society in the 1930s and among the first to deploy the novel and short story to this end. His book will make a valuable contribution to the ongoing reconsideration of O’Faoláin’s work.