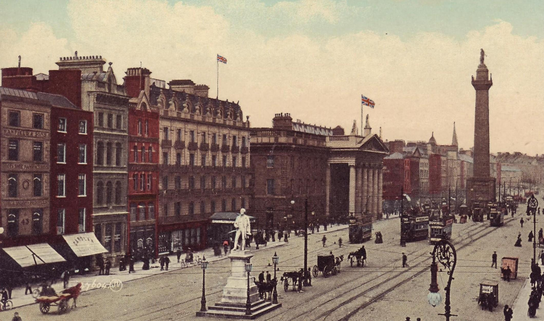 The 1916 Rising: Personalities and Perspectives. The National Library of Ireland. www.nli.ie/1916/exhibition/en/, 2016.

The National Library of Ireland's digital exhibition, The 1916 Rising: Personalities and Perspectives, is an impressive new resource that draws upon the Library's extensive holdings to provide visitors with an understanding of the Easter Rising—one of the most pivotal events in modern Irish history. Recently redesigned for a more intuitive visitor experience, the exhibition features more than 500 images for study and analysis, contextualized by Noel Kissane, the Irish historian and former Keeper of Manuscripts at the National Library. Kissane’s documentary perspective focuses on the men and women who set the stage for the events of Easter Week 1916, the seven signatories of the Proclamation of the Irish Republic, those executed in the aftermath of the Rising, as well as the causalities and survivors of the rebellion. By nature, the online presentation has characteristics that distinguish it from a typical public history exhibition: it is available at all hours, its attendance unlimited, and its “attendees” are not defined to a particular place. Therefore, Personalities and Perspectives is a dynamic exhibition experience, and it can offer more for its visitors than just a casual introduction to the Rising. Instead, it is also a scholarly resource, a teaching tool, a virtual fieldtrip, and an archive of primary resources, including maps, newspaper articles, original manuscripts, photographs, and drawings.

The Library’s exhibition opens with the iconic image of the Proclamation of the Irish Republic, accompanied by a brief overview of the events of the Easter Rising. This introductory commentary acknowledges the legacy of the events, the conflicting opinions about its efficacy and morality. This latter inclusion serves also as a disclaimer that reflects a broader trend in recent scholarship on the Irish Revolution, emphasizing the complexity of the period and the controversial nature of historicizing the events of Easter Week.[1] Importantly, organizers of the exhibition clearly acknowledge the nationalist orientation of the source material presented. This kind of openness is welcome, particularly during a year of commemoration when the official celebration of the Easter Rising has too often cast aside alternative perspectives in favor of unquestioningly nationalist narratives of the events.

After providing visitors with a brief overview of the events of Easter Week, the exhibition necessarily jumps back in time to establish the context for understanding the Rising. This “Outline of Irish History” charts the relationship between England and Ireland dating back to the twelfth century. It touches on colonization, the Act of Union, as well as the various attempts through the 17th and 18th centuries to dislodge Britain’s dominion over Ireland. This brief historical treatment invites visitors with various degrees of previous knowledge to delve into the background of the Rising, and it encourages contemplation of the deep roots of many nationalist grievances that would erupt later in armed conflict on April 24, 1916.

Following this rapid march through Irish history, the exhibition pivots to present the immediate context for the events that culminated in the Easter Rising. As stated on the website, the “main focus is on the personalities involved—their personal circumstances, their political formation, their perspectives, and their aspirations.” The online exhibition, therefore, takes a singularly biographical approach to its study of the Rising. Broader political issues that preceded the Rising, such as the debate over Home Rule, are approached through the personalities of men like John Redmond and Edward Carson. The Rising itself takes on a similarly person-driven narrative. Distinct sub-sections are devoted to brief biographies of the seven signatories of the Declaration of the Irish Republic and are followed by renditions of their individual participation in the Rising. Unsurprisingly, the most recognizable names of the Easter Rising, Patrick Pearse and James Connolly, receive the greatest treatment. Within these sections, each signatories’ personal background is recounted with particular emphasis placed upon their individual paths toward participation in revolutionary activity. For instance, Connolly’s involvement in the Rising is framed as the result of an escalation of anti-war sentiment that culminated in the realization that “revolution was the only political option.” Discussion of Pearse focuses on his rapid evolution from moderate Home Rule supporter and cultural nationalist to member of the Supreme Council of the Irish Republican Brotherhood and his adherence to extreme republicanism. Sir Roger Casement’s impressive and incongruous résumé is the only one to be singled out as its own section within the exhibition. The exhibition’s biographical focus can be frustratingly reductionist at times, however, the narrative of these events makes for a compelling reading.

In general, the exhibition is highly informative; however, certain portions leave the visitor wanting more. Surprisingly, the most striking of these is the exhibition’s section entitled “The Rising.” Viewers might expect to find details on the military history of the event here. Instead, the section provides short, single paragraph overviews of each of the eight days of rebellion. For example, the events of Tuesday, April 25th are reduced to six short sentences; its structure is simply too reductive. The complex and evolving nature of the conflict are major characteristics of the Easter Rising that should be transmitted more elaborately to visitors. This is largely an organizational concern, as the broader exhibition is not devoid of this information; rather, it is contained in a separate section entitled “Main Sites of Activity.” Here, individual sites of conflict are used to narrate the broader evolution of the military confrontation between British troops and Volunteers. When this section is combined with the exhibition’s “Reference Map,” they provide the needed day-by-day, site-by-site analysis that many visitors are surely seeking. The exhibition must also be commended for providing visitors with information on the Rising outside of Dublin, highlighting activities in Galway, Ashbourne, and Enniscorthy. Too often, popular discussions of the Rising fail to acknowledge that the rebellion was not a singularly Dublin-based event.

Some of the great moments of the collection are contained within the last few sections, where visitors learn about the fate of those who were arrested as a result of their activities during the Easter Rising. The inclusion of lesser-known photographs of the event, most strikingly those of wounded rebels at a makeshift hospital in Dublin Castle and of rebels imprisoned at Richmond Barracks, inject a needed humanity and vulnerability into the exhibition, bringing the narrative to life. One particular photograph of captured Volunteers being marched toward confinement along Bachelor’s Walk evokes important reflections about the broader history that contributed to the Rising, calling to mind the military outrage inflicted upon Dublin citizens by British troops in the same location less than two years previously. Commentary on “The Executed” steers away from rehashing the demise of the seven signatories, instead outlining the fate of the lesser known among the sixteen executed by the British state, such as its mention of Michael O’Hanrahan, who served as third in command at Jacob’s biscuit factory during the Rising. The exhibition’s organizers appropriately saw an opening here to introduce these less familiar names to the public.

Perhaps the online exhibition’s greatest allure is its potential for acquainting the general public, including students in the classroom, with this formative event in Ireland’s past. Its format is efficient, its narrative direct. For the introductory reader, the site is a veritable trove of information from which to familiarize oneself with the Easter Rising and its surrounding context. Overall, the exhibition is a welcome addition to the commemorative program of the centenary. There can be little doubt of the importance of the Easter Rising for the twentieth-century Irish experience. It is seen as one of the foundational events in the formation of an independent Irish state, a complex legacy that continues to generate wide discussion in Ireland. Although the exhibition will no doubt appeal to those already interested in the Easter Rising, its content is best suited to those looking to acquaint themselves with this event. Still, visitors of all interest levels will find a perusal of the website and its resources well worth the time. The 1916 Rising: Personalities and Perspectives is a useful digital destination, containing all of the basic information necessary to master a prefatory lesson on this seminal episode in the Irish past.