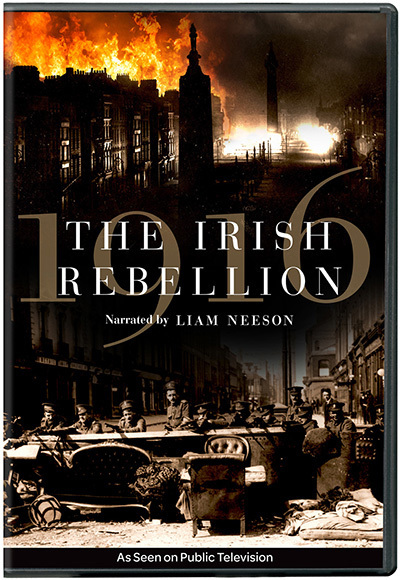 There are few great documentaries about Ireland’s turbulent history. Almost any part of that history has been fought over, disputed, subject to revision, and has sustained actions that have killed the disputatious and the innocent alike. But few events have been the subject of more historical and political debate than has Dublin’s Easter Rising of 1916. In this, the Rising’s centennial year, Ireland and its people, both at home and in the vast community of Irish expatriates, have wrestled with how to think about what was the most important week of modern Irish political history. Inevitably, if you are going to commemorate the Rising there are questions to be answered. What happened? What led to it? What did it mean and what does it mean today? 1916: The Irish Rebellion is a documentary attempt at coming to grips with this controversial and unresolved event. The director and the producers have given us a three-hour film that, while not without its flaws, is nevertheless both masterful and engaging, and will probably stand as the authoritative project on this subject.

The first hour of the documentary deals with the long and tortured history that preceded 1916. Given the complex side roads that can lead someone astray with this material, the film makers are to be congratulated for highlighting the major themes that will prove useful later in their accounting of the event itself, without getting bogged down. More attention might have been given to the constitutional political tradition of Daniel O’Connell and Charles Stewart Parnell, especially of their manipulation of nationalist themes and symbols. Critical in that story is the Anglicizing pressure upon native Irish culture, social institutions, and practices, which managed to survive and find expression in modern politics. While the film acknowledges this point, it might well have been fruitful to explore this issue further, given the cultural interests of most of the major figures of the Rising. Furthermore, the ability of Irish culture to survive under that pressure and provide the cultural inspiration for Young Ireland, The Irish Literary Renaissance, the Gaelic League and Athletic Association, and down to Patrick Pearse, Thomas MacDonagh, and others, was essential in the revival of the revolutionary fervor that took over from before the Rising to inform a major part of Irish nationalist politics ever since.

The film does an admirable job of explicating just how international the advanced nationalist movement was and how it led to the Rising. Its emphasis on John Decoy’s Irish community in America, with its theodicy where Britain was to be the source of all Irish woes, and the source of exile, is an important and well-made point here. Sometimes the vision of things is both clearer and simpler from far away, and that expatriated sense of grievance invigorated the republican movement well beyond the provision of financial support.

Pearse was already an established cultural figure and educator, as well as a recent member of the IRB when he went to America in early 1914 to raise funds for St. Enda’s School. Meeting the old Fenians there strengthened his convictions and impressed him greatly. He returned to Ireland to the welcoming arms of Thomas Clarke, who had successfully recruited Pearse, MacDonagh, Joseph Plunkett, and others to the IRB in no small measure because of the integrity of his own struggle against British power. The film correctly identifies Clarke’s role to be the pivotal one in grooming a new, if unlikely, group of men that would move the population to think of the possibilities that could only be realized in armed struggle. Clarke was the person ultimately responsible for getting his revolutionary cadre in the position to take over the Volunteers, certainly the most single important tactical achievement of the whole affair.

The documentary’s exploration of the event itself does a truly superior job in explaining the complicated action of Easter week. It communicates the nearly spontaneous nature of much of it, including the frequently farcical tactical decisions made by so many amateur soldiers. One wonders how anyone thought taking St. Stephens Green without taking the rooftops that surround and look down upon it was a good idea. The laughable failures to capture Dublin Castle and the telephone exchange were compounded by a bewildered and increasingly unreceptive citizenry that viewed the thing with skepticism and then hostility. Pearse never fired his revolver and he spent much of his time under rifle and artillery fire telling ancient Irish tales to the besieged men and women in GPO—it was bound to be comforting. But there was of course much heroism and tragedy as well, and the film is often moving in its telling of these events. One should note that the cinematography and editing are first rate.

Two features stand out in particular in this telling of the Rising. The first is a result of recent scholarship addressing the hitherto unacknowledged role of women in the Rising. It is a miracle more of them did not die. They provided aid and support at the sites of the conflict, often participation in the shooting war, and were the backbone of communications between combatants. And the film is to be congratulated for its stressing the cost to the innocents who perished. There were many more of them than there were to be dead revolutionaries. In the process, the center of the city was reduced to rubble and it is a well-made point that Dublin’s post-Rising landscape gives us a glimpse of how much of Europe was to look in the future. Both the British and the rebels were indiscriminate when it came to fighting and its consequences, and of course, at the very end, the rebels famously suffered the ire of Dubliners as they were marched off to jail because of it.

The last part of 1916: The Irish Rebellion contends with the legacy of the Rising. There is a little too much summation of what has already gone before, but there is also a seeming unwillingness to credit the ideas that made it all possible. The scholars who offer opinions are correct to stress the idea that for most of those who participated as well as the country that went through it, the Rising had its foundations in a long-simmering, historically-complex, and popular resentment at British colonial power. Despite being part of a union, Ireland was never treated as such nor did the vast majority of the Irish people think of themselves as equal in any sense.

One point in which the documentary could have been improved is in its examination of the cultural legacy of the event. The Rising has yielded endless fiction, drama, and both “high” and “popular” art. Much of its cultural legacy has been negative and an exploration of that would have been useful. It sits astride the historical landscape and has played a critical role in an internecine war between traditional history and “revisionism.”

The revisionists were correct in moving away from the teleological comforts of Ireland’s traditional history. They opened the way for an empirically-driven focus on the archives, which has exposed the vastness of the Irish historical experience apart from the story of the nation. Nevertheless, theories of revolution in the academy are increasingly focused on the question of agency. How is it that people are motivated to make that step, a step that involves the killing of others and the very likely death of oneself?

One of the wonders of this film is its inclusion of past interviews filmed with the survivors of the event. They reveal motivations that are anchored in political, economic, and social frustration, yet again, they cite ideas about what they believe Ireland should be, could be, and must be as the things that took them over the top. Ulstermen were doing the same thing at the Somme just weeks later for different ideas.

Inevitably, the ideas are the major legacy of 1916 even when the implications of those ideas are frightening and terrible. It might say more about our time that we want to dismiss Pearse’s idea of a blood sacrifice as nothing more than a rhetorical device, yet many a death has occurred since then with Pearse at the forefront of explaining a life given up for an idea of an Ireland yet to be. The film acknowledges that the iconography that followed 1916 was almost wholly Catholic in tone, but then Pearse expressed the rising in similar terms.

Many a political scientist ended up dismissing nationalism, ethnicity, and religion as important forces in Europe in the 1980s. As the Cold War ended some even thought it was the “end of history” in that liberal democracy had won out and the conflicts of the future would not look to those of the past. Then came Sarajevo, and then all over Europe, nationalism, ethnicity, and religion reappeared to challenge the status quo. The film would suggest that Ireland is mostly past all that. Peace in Ireland today might mean that a way has been found to the future without armed struggle, but history might well suggest that the unresolved issues are enduring. The Rising’s ideas have not left us.

The Easter Rising will be debated as long as national identity and the nature of the Irish state continue to be an issue in Irish and British politics. However, revolutionary events rarely yield themselves to conclusive understanding. In this rising, as in all of the other risings of human history, the causes that led to them, the motivations and experiences of the participants, and the "meaning" of them, will continue to be debated. The filmakers of 1916: The Irish Rebellion did not intend it, but they do convey how Patrick Pearse's vision of a rising with eternal spiritual repercussions was achieved despite republican failure in 1916. The fervor which animated those rebels, and all the other rebels over the ages, resists being contained by reason.