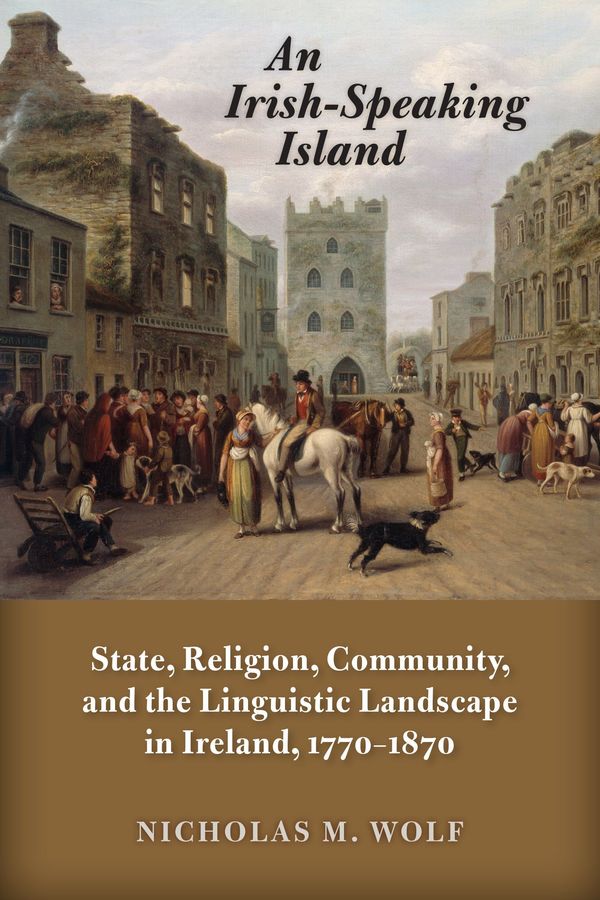 Ireland’s transition from a predominantly Irish-speaking country, to one where English became the dominant language, ranks among its most important changes over the past five hundred years. Yet this is arguably one of the most neglected topics in a large and expanding corpus of scholarly research on Ireland’s past. Nicholas Wolf’s An Irish-speaking Island: State, Religion, Community and the Linguistic Landscape in Ireland, 1770-1870 transforms this historiography by expanding our knowledge of key elements of this linguistic transformation, while also presenting a very credible challenge to the conventional narrative of Irish language decline.

Wolf concentrates on the years 1770-1870—the hundred years before the emergence of Irish language revival movements, including the Society for the Preservation of the Irish Language founded in 1876, and the Gaelic Union founded in 1880, which were the precursors to the Gaelic League founded in 1893. Within this time frame, Wolf examines a daunting array of manuscript and print sources, building on the growing volume of research into Irish print and manuscript cultures. For those who are not experts in this field, this book gives a comprehensive guide to recent writings, bridging the gap between historians and Irish language scholars.

Through Wolf’s investigation, he suggests that the dominant historiography has been dictated by the shadow of the revival movement at the turn of the twentieth century, and its belief that the language was threatened with extinction: “Thus, long before the advent of modern scholarship the history of Irish was linked first and foremost to an account of its decline and prospects of death” (8). The conventional narrative of decline blamed Daniel O’Connell, the national schools and lack of support from the Catholic Church (I learned about the first two villains at national school—needless to say my convent school did not blame the Catholic Church!). Wolf notes that the “self-evident proposition that speaking Irish was a biological manifestation of certain features like rusticity, orality, and most of all, a deep—even biological—Irishness” (10) led to an excessive focus on the areas along the western seaboard that constitute the modern Gaeltacht—at the expense of a more diverse historical picture.

In place of this stereotype, Wolf emphasizes diversity and heterogeneity: the extensive evidence that Irish was spoken in Dublin and other towns, and by Irish soldiers in the British army. He examines bilingualism and code mixing. In particular he contests the argument that Irish was confined to the private/domestic sphere, with English regarded as the high-status language, used in politics, education, and business. Rather, “domains were not in fact stable or clearly defined in Ireland during the period in question” (45). Wolf presents extensive evidence, showing that Irish was widely used at fairs and markets; bilingual Irish-speakers would interpret for monoglot English speakers; newspaper advertisements would seek shop boys and bookkeepers with knowledge of Irish; and there is evidence of Irish-speaking prison-warders, policemen, and public servants in local administration making use of Irish in their daily occupations. Indeed, Wolf suggests that this knowledge of Irish enhanced the power of civil authorities—such as a policeman who could understand speeches in Irish at political gatherings. Newspapers, commonly seen as an important medium for spreading the English language, were not only read aloud, but summarized in Irish, so that monoglot Irish-speakers could be kept informed about major events. As Wolf concludes, “an extended stable period of bilingualism existed in many areas in which Irish functioned as an internal community language and English was reserved for outsiders” (57). Furthermore, surviving evidence of jokes made about monoglot English-speakers suggests that encounters between the two languages did not automatically assume that Irish was the inferior language. Overall, Wolf moves the focus away from the Irish language as a national identity to emphasize the importance of dialect as a marker of local and provincial identities, both in Ireland and among Irish emigrants.

The second half of the book focuses on those villains who have traditionally been blamed for the death of the Irish language. Education has a very prominent place in the historiography, both popular and scholarly. It is well established that the Irish Society and other proselytizing agencies used Irish as a mode of instruction; what is less-widely recognized is that they recruited many of their teachers from private pay schools that offered instruction in Irish. While Henry VIII’s parliament—in line with other early-modern centralized states—was determined to wipe out linguistic heterogeneity, and therefore the Irish language, the primary concern of the English administration was to promote the Protestant faith. To this end, protestant services were translated into Irish during the reign of Edward VI. Once English/Protestant rule in Ireland became secure in the 1740s, the authorities appear to have lost interest in Irish as a living language, and this tendency was reinforced by the growing antiquarian interest in Gaelic manuscripts. While Protestant missionary societies used Irish as a mode of instruction, they failed to develop any non-religious literature in Irish. Irish was taught in some pay schools in the late eighteenth and early nineteenth century, and despite the official policy of excluding Irish from the national schools, some school teachers were using Irish in their classrooms in the 1850s. Wolf draws attention to a resolution passed by the Irish National Teachers’ Organisation in 1869, calling for the commissioners of national education to pay a premium to teachers who taught Irish as a special subject. This resolution predates the 1876 petition to the same effect from the Society for the Preservation of the Irish Language, which is generally seen as marking the change in attitude toward the teaching of Irish in national schools. Wolf suggests that the fact that this initiative came from national teachers is significant: “The firm place of Irish in the schools by the eve of Irish independence was thus a product of a long-standing debate reaching beyond 1876 and waged outside of the reports of commissioners, and driven in no small part by the use of Irish by teachers without its approval at topmost level” (148).

Wolf’s chapter on politics and the legal system records the extensive use of interpreters in the courts and at the polling stations, where the oath taken by voters had to be translated. The numbers of Irish speakers on electoral rolls—at a time when the franchise was restricted to adult males holding property of £10 valuation, is an indication that Irish-speakers were not confined to poorest sections of the population, as is frequently suggested. The evidence of political meetings addressed in Irish and the numbers of Irish-speaking voters furthermore indicates that “the modern Irish political scene that emerged in the second half of the nineteenth century was thus forged not just in English-speaking Ireland but in its Irish-speaking communities as well” (180).

The most ambitious chapters in this impressive book concern the Catholic Church, where Wolf takes issue with the late Emmet Larkin’s timing of the devotional revolution and the belief that it was associated with English speakers. The large output of devotional literature in Irish in the early 19th century—both in print and in manuscript—suggests a strong demand for religious texts in Irish. Irish-language catechisms were widely-distributed up to the 1870s. There was also a ready circulation of more sophisticated material such as prayer books and religious poetry; litanies—much of it translated from continental or English-language sources and generally produced in manuscript form, which catered to the needs of prosperous farmers. Far from Irish-speakers being in opposition to the devotional revolution, Wolf suggests that the social patronage for Irish language religious material was “not incompatible with the same forces that supported the devotional revolution" (196), and the content of religious material in Irish was consistent with the devotional revolution. Irish speakers thus participated in “the forging of modern Catholicism,” just as they participated in the forging of the political culture of late nineteenth-century Ireland.

As Wolf records, Catholic clergy also used Irish quite extensively and in a variety of contexts. They adopted Irish in a Jesuit mission in Clare in the 1860s. Tipperary priests in the 1870s oscillated between English and Irish services every other Sunday. They translated books and manuscripts of sermons into Irish. Through these examples, Wolf suggests that the pervading belief that the Catholic Hierarchy showed little interest in the Irish language reflects a focus on national sources. As he shows, there is ample evidence to the contrary in dioceses with a significant number of Irish-speakers. The diocese of Cloyne was very conscious of the need for Irish-speaking clergy. Local seminaries such as St. Jarlath’s in Tuam and St. John’s in Waterford employed chairs in Irish for that reason. Almost half of the Maynooth students in 1861 were Irish speakers, and while this had fallen to less than one-quarter by 1891, there would have been significant numbers of Irish-speaking priests through the end of the century.

Altogether, Wolf presents us with a new “Hidden Ireland,” but whereas Daniel Corkery described a “Hidden Ireland” that was remote from cities and towns, located in the bogs, hills, and mountains, and among the poor peasantry, Wolf shows that Irish-speakers were an integral part of the forces that shaped modern Ireland: trade, politics, law, local government, and Catholicism.[1] The implications of this book go far beyond the historiography of Irish language decline; they extend to the dominant narratives of the history of Ireland in the nineteenth century.