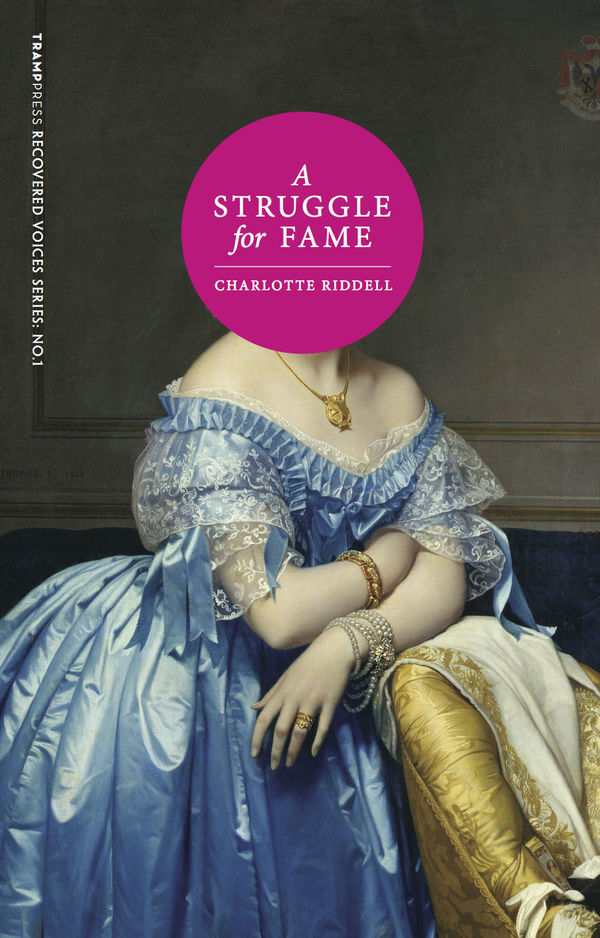 It is a truth universally acknowledged that an Irish woman in possession of considerable writing talent must be in want of a publisher. Writing from her own experience as an Irish immigrant in London, Charlotte Riddell (1832-1906) published A Struggle for Fame, a Victorian tome in three volumes (Bentley, 1883), with a narrative arc of roughly thirty years, spanning from the mid-1850s to the early-1880s. Riddell had already achieved recognition as a best-selling author by the time she published this semi-autobiographic novel. Later, however, Riddell and her novels lost their place in the literary milieu, as implied by the novel’s inclusion in the independent Irish publisher Tramp Press’s series on “Recovered Voices.” According to its press release, the series is “committed to rescuing and recovering forgotten literature,” and Riddell’s neglected novel fits the bill. Although Riddell achieved commercial success in the 1860s, finances largely compelled her quick writing pace and consistent publication record. While she began to publish under her (married) name rather than a pseudonym, A Struggle for Fame remains a novel written by a marginalized nineteenth-century Irish woman who tried to survive amidst poverty in a country not her own. Perhaps unsurprisingly, Riddell’s late novel retains the grit of an underdog never entirely comfortable moving beyond that identity. Like her novel’s protagonist, Riddell struggled for fame and grappled with the complexities of Irish identity as a woman writer in Victorian England.

The novel follows the aspirations of novelist Glenarva Lacere (née Westley), including her success as a published author, and her decision to continue to write following a betrayal by her publisher and the death of her husband. Unlike her literary predecessors in Jane Austen’s Pride and Prejudice (1813), Glenarva does not marry at the end of the novel despite Ned Beattie’s “want of a wife.”[1] Nor does she accept Mr. Dufford’s proposal. However, she does, eventually, accept a marriage proposal from her publisher, Mr. Lacere. The novel ends with a narrative portrait of Glenarva as a writer wearied by the struggle to publish and earn fame for the benefit of men. The pursuit to “trace a pencil-mark on the tablets of time” ultimately leaves her aggrieved and alone (407). Draped in black garments, the novel’s final image presents Glenarva mourning for her dead publisher-husband, her father, and her wasted fame valued not for its own sake but “merely for the sake of the only man, besides her father, she had ever cared for” (400).

A Struggle for Fame opens with a chapter titled, “Pilgrims” (from peregre, meaning “beyond country”[2]), introducing the novel’s main characters and motivations. Bernard Kelly “was going to London to see whether the metropolis would greet him with effusion” (4). He is enamored and subsumed into the “realms of Bohemia,” eventually writing “gutter fictions” and articles for the Galaxy (81, 142, 308). Glenarva Westley decided to “drag off [her father] to London, where he might as well be nobody,” having lost his “heritage” and Glen’s inheritance “not through vice, but folly” (8-11). The financial burden falls on Glen who feels compelled to support herself and her aging father. She lies “wide awake” at night trying to figure out, “What could she do?” (88), as her father becomes “limp mentally” and, afterward, “[sinks] into the condition of an invalid” (226). Finally, Glenarva decides to write, like Riddell herself, “fiction in three-volume form” (88-90).

Significantly, Glenarva approaches the task of being a published author without any background knowledge of “how books were printed or published,” never having met an author herself or knowing anyone “who ever had met one” (91). A foreshadowing of Glen’s future exhaustion from the publishing industry occurs during the “discouraging work” of entering publishing offices without an appointment (184). For instance, Glenarva and her father arrive at Vassett’s publishing house to present her manuscript. The publisher reveals his sexist attitude by claiming the situation to be “worse” because the manuscript belongs to a female writer rather than a male author (43). We also learn that “Irish stories are quite gone out,” according to Vassett, and that anyone who is to be taken seriously should not “play at authorship” by writing Irish stories (48). Instead, tales of the high life—“the Upper Ten in London”—were the stories that sold (122). Glenarva despairs, admitting to her future publisher, “no one [she has] met with as yet will really read a manuscript. [She has] only written Irish stories, and [publishers] want English” (189). Later, the “genius the girl had in her quickened to life” and fame followed shortly thereafter at the age of seventeen, when Mr. Lacere offers to fund the publication of Glen’s novel (118). Midway through the narrative, she at last achieves fame—“Great heaven! She had waited all these years for this—and it came then!” (255). Then, after Glen receives a letter of acceptance for her manuscript, her father dies.

The ubiquitous subtext of A Struggle for Fame is the misogynist structural oppression of the publishing industry. “The publishers are worse than any leprechaun,” Glenarva declares (258). With an astute awareness of her own struggle with systemic marginalization, Riddell and her novel’s protagonist publish under a male nom de plume, recognizing that it is only after achieving fame that an author might reveal herself. Identified as “Glen” throughout A Struggle for Fame, the protagonist’s ambigendrous name suggests that she is willing to morph her identity to suit the demands of a male-dominated profession. Personified by Mr. Vassett, the business of publishing is a lucrative one that enables him to “contemplate the coming years without any terror of poverty” (36). Lady Hilda, the daughter of an earl, is one of Vassett’s highest grossing authors. Her books sell because of the “amount of ill-nature and scandal and misrepresentation she managed to put into them” (38), rather than because they inspired or reflected a unique artistry. As if Vassett’s position on female authors was unclear, he thinks—after tallying his profits from Lady Hilda’s last release—that women are “more suitable [at] the spinning wheel and the working of tapestry” than at the art of literary composition (52). Another one of Glenarva’s publishers, Mr. Lacere, imagines a woman writer as a caricature: “ladies with middle age and spectacles” (236). To be fair, when not writing, Glen was “generally sewing” (248). To her credit, however, Glen is indignant when her aunt regards her prose as “good on the whole—good, that is, for a girl” (259) and when she is judged as “clever—for a woman” by another woman (361).

Part of Riddell’s critique of the social and political inequalities faced by women writers involves race. A Struggle for Fame presents a mocking portrayal of the systematic mistreatment and dehumanization of black people as Ben Dawson appears in “black face […] twanging” on a banjo. The narrator describes the scene as “old boy” style humor to remind readers that race-based discrimination is not limited to women writers (75). Further, readers gain a direct sense of how Glen and her novels are perceived by her literary coterie through dialogue between characters rather than third-person narration. Fellow partygoers assume that the success of Ashtree Manor, Due East, and Heron’s Nest are predicated on the fact that the author is someone other than an Irish woman. After meeting the author in person, some continued to doubt the authenticity of her oeuvre: “The general opinion is, her husband writes her books; I have heard he is very nice’ […] I thought Lacere [Glen’s husband] must have married some girl from the old neighborhood; but I understand I was mistaken. She is Welsh, or Scotch, or—” (343-344). Finally accepting the authority of the female and Irish author, several partygoers conclude that there is really not “‘much to say about her’ [because] ‘she certainly doesn’t look clever, or like a person capable of writing a successful book’” (344). Ultimately, Glen is reduced to her physical appearance and judged by others’ visual perception of her body rather than her intellectual corpus and its record of success on the market.

The literary revival of novels like A Struggle for Fame provides material for ongoing discussions about the dynamics of women’s literary production and the publication of “Irish stories,” in particular. Prior to Tramp Press’s 2014 reprint, Riddell’s novel remained largely overlooked in our literary and cultural histories. The novel’s subject matter may “seem to today’s readers to be overly formulaic” and pedestrian.[3] Referring to marriage as a “hymeneal altar,” for example, Riddell’s diction often strikes modern readers as obscure to the point of absurdity (302). It is, nevertheless, crucial to debate such topics, particularly those struggles of the Irish woman writer, in order to appreciate the complexities of gender, nationality, and class as they are represented in Victorian fiction.