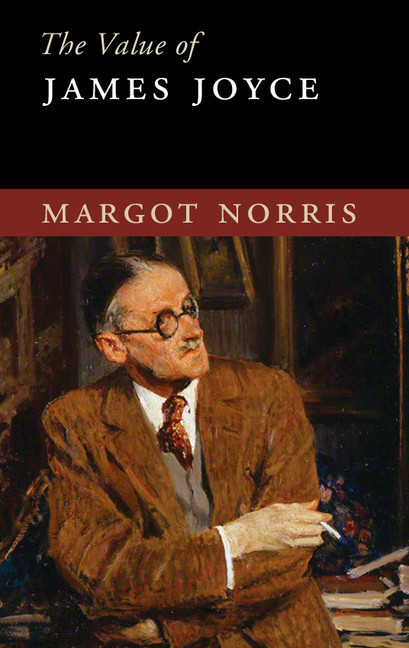 The title of Margot Norris’s newest book, The Value of James Joyce, taps into a recent trend in the humanities of critical debates on the value of cultural studies, signaled by such books as The Values of Literary Studies: Critical Institutions, Scholarly Agendas, edited by Ronan McDonald. His volume seeks to articulate, among others, “the social value of advanced-level study and research into literary tests.”[1] His contributors address the issues of “the good” of literature and the goals of literary criticism/scholarship, etc., in chapters unified by “a conviction that we find the values of literary studies, at least in part, by identifying and articulating the values in literary studies.”[2] When McDonald spoke at the 2016 20th Trieste Joyce School, his lecture, titled “Joyce, Empire, ‘World Literature,’” situated “Joyce” alongside global literary/cultural studies, cultural value(s), post-colonialism, etc., and focused on “the value of Joyce” in terms of the transnational circulation of “Joyce.”[3] In Norris’s book, the “value of Joyce” is understood as the value of Joyce’s work, which lies “in its enormous efforts to enrich our concepts of the human—the aim of all art, to be sure, but achieved here in particularly broad and complicated ways” (6). Throughout her book, Norris allows Joyce’s works to speak for themselves as she revisits story-lines in specific contexts that anchor her emphases on the significance of the ordinary, Ireland’s urban/natural place, classical and popular culture, and Joyce’s language.

In the introductory chapter, “Democratic and Cosmopolitan Joyce,” Norris reflects that Joyce’s “curious ability to fascinate both high-brow academics and ordinary readers is an important quality of Joyce’s work—important because it speaks for a major aspect of its value as art with a remarkably democratic impulse” (1). This impulse comes from Joyce’s own democratic temperament attested to by many who knew him: Sylvia Beach recalls that Joyce “never met a bore” and “treated everyone as equal,” and Arthur Power states that “in Paris [Joyce] lived the most ordinary life imaginable.”[4] Significantly, this ordinariness marks most of Joyce’s characters whose deep humanity precludes judgment or reductive classifications. Noting the cultural heritage of Leopold Bloom (Hungarian Jew) and Molly Bloom (of British/ Gibraltar/ Sephardic Jewish origins), Norris writes that “their condition as ordinary Irish folks is given a remarkable depth…and lets Joyce draw Ireland out of provincial representation and give it status as a surprisingly cosmopolitan place” (4). Of course, Trieste, where most of Ulysses was composed, was just such a place, and John McCourt has shed ample light on exactly how much of the dynamics of Ulysses directly reflects the Triestine environment that could not but reaffirm Joyce’s natural indifference to all manners of hierarchy.[5]

That much of Joyce’s work is about the “ordinary” is well presented in chapter two of Norris’s book, “The Significance of the Ordinary in Dubliners, Portrait, and Ulysses.” The “ordinary” is “one of the most important elements of Joyce’s democratic impulse” because, thanks to the “keen specificity with respect to the banal activities of [Dubliners’] everyday life, [Joyce] intensifies the vitality of what it means to be human” (8). The “ordinary” includes Dublin’s setting with its real addresses and real people that Joyce rendered with great attention to Ireland’s cultural and economic realities. It also includes the bodily: Bloom’s session in the outhouse “in no way demeans him” (32), nor does the narrator’s urination in “Cyclops,” or Molly’s menses in “Penelope.” Norris comments that “these activities are part of human life on the planet and they are treated with an emphasis on their ordinariness that nonetheless has the effect of bringing the protagonists’ bodies and their living attributes into sharper and more vitalistic focus” (33).

The concept of the place “signifies a variety of issues, and arguably two of the most worthy of considerations are the ecological and the political” (41). They are discussed in chapter three, “Irish Nature, Irish City: The Complexities of Place,” in terms of nature (e.g., Chamber Music) and politics, (contextualized through the issue of emigration in “Eveline” and “A Little Cloud”), repatriation (Exiles), and immigration into Ireland “that has both ethnic and religious implications in the case of Jews such as Bloom’s father” (52). Norris recounts relevant passages to emphasize her point: “Place plays a varied role in Joyce’s writing, and I have tried to broaden it conceptually…as physical space with its natural attributes as well as its more symbolic character as an area of governance inhabited by persons of similar or different cultural origins and features” (63). Space in Joyce, in its urban and perceptual dimensions, has received ample critical attention and, while Norris does not mention it,[6] she does discuss how Joyce’s works approach place through political and ecological explorations, to conclude that the “complexities of place offer readers of Joyce’s works an ever-changing and invigorating adventure” (65).

Chapter four, “Joyce’s Cultures, the Classical and the Popular,” opens with a disclaimer that classical literature could be seen as offering anything but a representation of everyday life. Like other modernists, Joyce embraced classicism (Norris comments, among others, on Joyce’s use of Homeric titles, 66); he also incorporated popular culture into his works, whereby “the immense cultural range of Joyce’s imagination as applied to his fiction becomes strikingly visible” (67). Norris revisits Joyce’s treatment of the Odyssean themes of adultery and wandering. She points out that Joyce’s presentation of Molly’s affair with Boylan signals evolving attitudes to female adultery away from the mores established by such classics as Madame Bovary or Anna Karenina (68-70). Keri Ames’s study on fidelity in the Odyssey and Ulysses[7] provides additional context. Moving to Bloom’s peregrinations, Norris hastens to add that while “Joyce’s analogues to the Homeric dangers are often metaphorical” (74), his “adaptations of Homer’s Odyssey in Ulysses demonstrate the impressive variety of techniques at work in his use of the classic” (76). Discussion of popular culture in Ulysses and Dubliners is anchored in the works R. B. Kershner, Cheryl Herr, and Zack Bowen as Norris revisits Joyce’s use of popular music, literature, and advertising culture to emphasize the richness of Dublin’s everyday life.

In the closing chapter, “The Style of Ulysses and Finnegans Wake: Moods, Voices, and Language,” Norris reflects that “Joyce’s works give readers palettes of many moods, and these, in turn, are produced by the myriad voices that tell his stories in myriad styles.” She adds that his “stylistic experimentation over the course of his writing has become a signature feature of his contribution to modernist literature,” even as its range and complexity “becomes almost overwhelming” (95). Thus “Nausicaa” is “narrated in such a peculiar voice that it takes us a moment to understand that the first section is about Gerty MacDowell’s evening on the beach in the style in which she would wish her story to be told if it were written using the conventions of style and diction of the romance novel; this “experimentation lies not in the complexity of the language, but in the complex role of imitation and possible parody” (96). In “Eumaeus,” Bloom’s wit “fails to translate into his conversation” with Stephen who rebukes Bloom to change the subject, whereby Bloom resumes the dispute “in his mind in the same pedantic, dry style he voiced in conversation, his boring talk becoming funny by virtue of its total lack of wit and humor” (98). Many readers will find Bloom’s talk neither boring nor devoid of wit, though the chapter’s style is certainly challenging. Tackling the subject of stylistic experimentation, Norris pays her respects to Karen Lawrence[8] and, as she reviews rhetorical figures in “Aeolus,” to Don Gifford and Robert J. Seidman.[9] Her discussion of Finnegans Wake moves through its four parts, highlighting voices and moods, and noting, for example, that the “rhetorical structure of [the washerwomen’s] narrative is gossip,” but the mood is that “of sympathy rather than blame” (116). The narrative voice in the children’s chapter echoes nursery rhymes, games, and songs, and “the chapter’s mood…never darkens” (118). ALP’s last words form “an intimate, informal address to her husband” (128). Recounting the closing passage of Finnegans Wake and ALP’s last phrase, Norris also, rather abruptly, ends her book.

Norris’s statement that “[t]he value of Joyce’s work lies in its enormous efforts to enrich our concepts of the human” is spot on (6). And while presumably the titular “the value of Joyce” enfolds the reference to “Joyce’s works,” additional articulation of that distinction in terms of the current developments in literary/cultural studies is left to readers. But, aided by Norris’s engagement with the book’s prisms of the ordinary, place, culture(s), and language, readers will enjoy revisiting some of the familiar and rich territory that is the Joycean world.