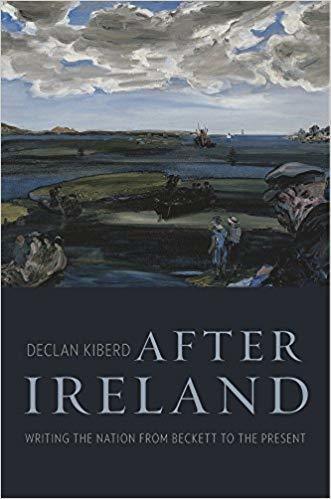 I suppose it was always destined to be a three-parter, wasn’t it? When Declan Kiberd’s Inventing Ireland was published in 1995 to considerable acclaim, it presented itself as a single comprehensive volume on Anglo-Irish Literature. But although the book made a single, strategic leap forward to conclude with a discussion of Brian Friel’s 1980 play, Translations, the chronological consideration of the literature stopped in the 1950s, with Samuel Beckett and Brendan Behan. Irish Classics in 2000 went back to 1600 and sideways to embrace writing in the Irish language as a necessary and enabling though infrequently considered context for Anglo-Irish literature; but it didn’t progress any further chronologically. And so there was always going to have to be a third volume to take the argument forward (in the literature of both languages) from Beckett in the 1950s to the present. And in After Ireland: Writing the Nation from Beckett to the Present, Kiberd means what he says in the title about the present: BREXIT is here, as are references to the same-sex marriage referendum, the Waking the Feminist debate around the Abbey Theatre program in 2016, and such important works of recent scholarship as Clair Wills’ wide-ranging study of emigration, The Best Are Leaving (2016).

The book is organized in an interconnected way. Individual works from key authors are considered chronologically, from Beckett’s Godot to Conor McPherson’s The Seafarer and Claire Keegan’s Foster. Plays alternate with novels or poetry collections, so that a consideration of Brian Friel’s Philadelphia, Here I Come! is followed by a chapter on Seamus Heaney’s North. Interleaved more occasionally are chapters on Irish language writers and a series of interchapters on Irish neutrality, secularization, emigration, the Troubles, Europeanization, the Irish language, the Women’s Movement, and Peace.

The figure of W. B. Yeats dominated Inventing Ireland. Kiberd took inspiration from Edward Said’s Yeats Summer School lecture and Field Day pamphlet, Yeats and Decolonisation, to present Yeats as the architect of a post-colonial Ireland. No single figure dominated Irish Classics. I had heard that Kiberd was writing a book about Samuel Beckett and was very much looking forward to it. When After Ireland appeared, while being glad to see it, I also wished the Beckett project had not been postponed. But After Ireland turns out to be very much about Beckett. He is of course named in the title but lest the “from” suggest he is being left behind in the 1950s, Beckett remains very much a force in the book as it advances toward the present. He does not dominate it in the same way as Yeats, however. Beckett is rather more of an underground presence, a subterranean stream which bubbles up to the surface from time to time, a ghost who haunts the lines. In his introduction, Kiberd tells a wonderful story about how Samuel Beckett’s father took his ten-year-old son up into their beloved Dublin Mountains during Easter 1916. As they viewed Dublin burning below, William Beckett (who was a quantity surveyor) gleefully calculated the profits to be made from rebuilding the devastated city; his young son, by contrast, “was horrified by the sight” (3). Beckett is the perfect prophet for what succeeds the national project of nation building; offering devastated landscapes with no recognizable landmarks (Beckett returned at one point to a Dublin in which he could no longer read any of the signs because the names were now in Irish) and a cast of characters who have trouble remembering anything with confidence. The metaphor Kiberd uses, and it provides the thesis for the book, is that of the corpse who won’t lie down or stay dead (they may not even recognize they are dead): “the sense of an ending suggested that something else might be beginning” (481). He points out that when Máirtín Ó Cadhain was writing Cré na Cille in the late 1940s, where the inhabitants of a Connemara graveyard continue to hold animated postmortem conversations, Samuel Beckett was around the same time penning the following lines in En Attendant Godot in French, before translating them into English: “‘To have lived is not enough for them. They have to talk about it’” (46). Declan Kiberd had the immense good fortune of being a student of Ó Cadhain’s in his first year of studying Irish at Trinity College, Dublin, in 1969-1970. Kiberd was just in  time; Ó Cadhain died suddenly at the age of 64 in October 1970. But he continues to speak to his former student in these pages, a powerful and disruptive presence. The third tutelary deity (for we are agreed that all things go in threes, aren’t we?) is J. M. Synge, who provides the bedrock of the book. He was the subject of Kiberd’s Ph.D. dissertation at Oxford and of his first book, Synge and the Irish Language (one of the greatest scholarly works ever on a single author). Synge surfaces throughout After Ireland, as the most prophetic and influential voice of all. When a character in John McGahern’s last novel, That They May Face the Rising Son, is rude at the expense of Synge’s Playboy of the Western World, describing it as “‘terrible eejity stuff,'” the wily Kiberd strikes back by bringing on a much quieter and very different Synge text, his prose narrative The Aran Islands, “‘written with the sort of spare, austere authority which provides a template for this book”’ (435).

If Ó Cadhain’s presence speaks to the welcome prominence of Irish-language authors in After Ireland—there are early chapters on Máire Mhac an tSaoi and the Irish publishing house, Sáirséal agus Dill—J.M. Synge is crucial because he raises the issue of translation so central to the book’s argument. Two of the very best chapters are animated by the issue of translation: Michael Hartnett and his “‘Farewell to English”’ and Nuala Ní Dhomhnaill and her two famous English language translators, Seamus Heaney and Paul Muldoon. I have long felt that Hartnett was the most underrated poet in Ireland. Kiberd makes exactly the same point at the close of the Hartnett chapter and sees this as profoundly linked to his status as “‘the greatest translator of Irish language poetry in the second half of the twentieth century”’ (209). Ní Dhomhnaill, who is herself a fine translator into English of her own poetry, has sponsored translations by Muldoon and others. Kiberd marshals the arguments against such a practice (in effect, that they give too much ground to English) but dismisses them, notably by citing Ní Dhomhnaill’s own words: ‘She denied absolutely that she was offering herself as “the male poet’s Muse: they were my translators'” (301).

The list of contemporary Irish writers considered in After Ireland is impressive and tackles work of lasting literary significance. Some feature more than once. Brian Friel provides three landmarks in the historical survey of the second half of the twentieth century: 1964’s Philadelphia, Here I Come!, which takes a less benign view than usual about the effects and motivations of Private Gar’s vocal interventions on behalf of the reticent Public Gar; 1980’s Faith Healer, Friel’s most Beckettian text, with its almost bare stage, two of its characters speaking from beyond the grave, and virtually no identifiable emblems of Irishness (other, let it be noted, than Frank Hardy’s green socks); and with 1990’s Dancing at Lughnasa, which is astute in its assessment of the gains and losses involved in the transition of Ballybeg from tradition to modernity. John McGahern gets two chapters. That on Amongst Women, the greatest contemporary Irish novel, charts how Moran carries the war he waged as a soldier in the War of Independence into the domestic sphere. McGahern, who was once asked why all of his stories were unhappy, replied: “‘Happiness is its own expression.”’ (439) He seemingly broke that rule in That They May Face the Rising Sun by writing about happiness, but as Kiberd astutely recognizes, in the novel happiness is never recognized as such in the moment of its being experienced, but only in recollection. Obviously, one can differ about choices; but the only omission I grieve for is that of Patrick McCabe’s great novel, The Butcher Boy. Women writers are present in Kiberd’s selection as well as men. In poetry, Eavan Boland and Nuala Ní Dhomhnaill rise up to match Seamus Heaney and Derek Mahon. In prose, one of the best early chapters is on Edna O’Brien’s The Country Girls; and there are later chapters about Éilis Ní Dhuibhne and Claire Keegan. The penultimate chapter is on an author and work I did not know, Kate Thompson’s The New Policeman. I guessed (correctly) that it is a young adult’s novel, reflecting Kiberd’s recent interest in teaching and writing about children’s literature. Only in drama are the women missing: none at all, no Marina Carr or Máiréad Ní Ghráda’s An Triail.

After Ireland is Declan Kiberd’s best book, certainly since Inventing Ireland. It is his most relaxed: at this stage, he has nothing to prove though plenty to impart. You can feel the weight of experience behind every clearly- written line. The book was wonderful company for the ten days I was reading it; I was sorry to part and urge you to make its acquaintance. It’s one of the few long books I would have wished longer.