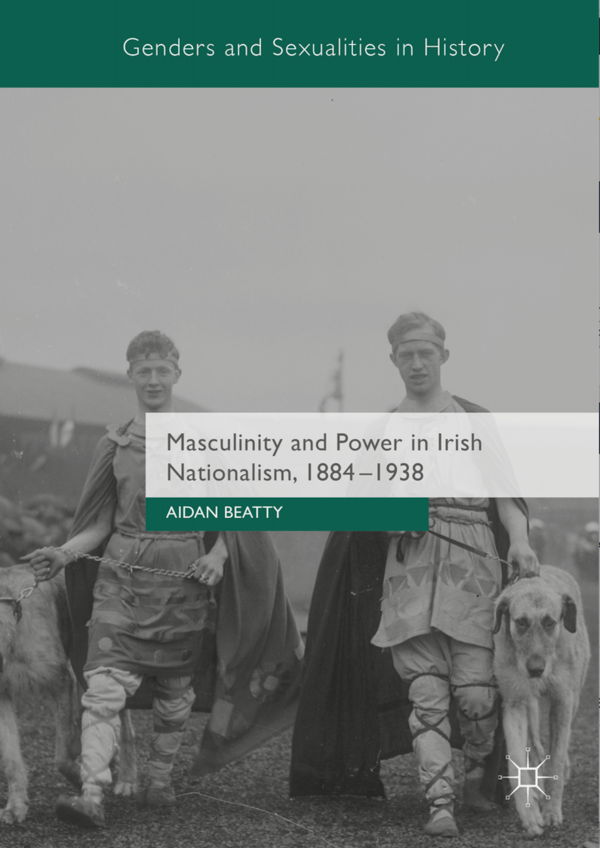 In an era where sexist nationalism is undeniably on the ascendant, the publication of Aidan Beatty’s Masculinity and Power in Irish Nationalism, 1884-1938 takes on a somewhat unhappy relevancy. As a comparative study of masculinity in both the Irish nationalist and Israeli Zionist contexts, Beatty's work questions the link between sovereignty and male virility through an interrogation of an impressive variety of sources, ranging from late-Victorian political broadsides, police magazines, and graveside speeches, to the founding documents of the Gaelic Athletic Association and Gaelic League, all the while documenting a parallel track of works in Zionist history. In each instance, Beatty delves into the ways in which national power is defined in relation to an ideal of male potency. While the years from 1912 to 1923 have been privileged in modern Irish history as the revolutionary period, Beatty is himself wary of the focus on the "revolutionary" and its emphasis on rupture. Rather, his book suggests "it is more profitable to trace a long arc of development from the later nineteenth century well into the twentieth” (3).

As such, the book is structured not chronologically, but each of the six chapters (plus introduction and conclusion) is built around a theme: the perception of time and martyrdom, the role of "muscular ideals" in gender-driven organizations, the creation of male dominated spaces, the structure of the Gaelic League and the Gaeltacht regions, the relationship between land ownership and gendered nationalism, and the state's role in legislating gender difference. Thus, while the book begins prior to the traditional revolutionary period and continues up to the second world war, the analytical tools that Beatty creates, or adopts from Zionist studies, are equally as applicable in thinking about today's world as they are to the original temporal context of the book.

To begin this study, Beatty's introduction examines the construction of Zionist masculinity as it comes into existence in response to racist stereotypes of the “lazy,” the “animalistic,” the “unproductive” Jew. This figure, he proceeds to compare to the colonial image of the Irish man, taken to be feckless, primitive, pre-capitalist, and unable to function in the modern state (5). To combat these caricatures, both Zionism and Irish nationalism attempted to create a new, albeit historically conditioned, image of Irish or Jewish virility. Beatty notes a number of historical similarities: contentious relationships to the British empire, the desire to re-popularize the use of older national languages, the role of foundational traumatic events (famine, Shoah), and the emphasis on agrarian labor, to name only a few (6-7). In this way, Beatty is able to hold that while the political situations may have been different, their anti-racist, nationalist tactics were remarkably similar.

Of particular note is the manner in which Beatty frames the discussion of masculinity in relation to time in his second chapter, “Time, Gender and the Politics of National Liberation, 1916-1923.” As both groups take the loss of masculinity to be a consequence of racism and colonialism, there is an Arcadian cast to the examination of precisely what maleness means, and a backward-looking retrieval effort based thereupon. Through a reading of Dan Breen's My Fight for Irish Freedom (1924), an account of Breen's involvement in the Irish Republican Brotherhood and Irish Volunteers, Beatty argues that the idea of the revolutionary man was conceived of as a continuation of the militant Celtic past. Colonialism represented a break with the continuity of Celtic tradition, and revolutionary action would realign time by uncovering an “authentic” Celtic way of being. This creates, Beatty argues, a “specifically masculine sense of Irish historical-national time” wherein "all true Irish nationalist men exist together" (22). Like the Zionist chalutzim (“pioneer settlers"), who used kibbutz settlement to reconnect modern Jews with a Biblical understanding of manly labor, the Irish nationalists emphasized land, language, and physical culture. In this way, Beatty unearths a temporal basis in nationalist masculinity for both the Irish and Zionist cases, a bias that is premised on looking backward to one's "proud forefathers" (25), and posits a warrior ideal that was athletic, agrarian, and male.

Importantly, the specific links between masculinity, history, and nationalism allow Beatty a useful lens into its inherent sexism. While male nationalist activity takes the form of a relationship between men and the historically male ideal, the role of women is modelled on the abstraction of the nation as proud mother, as justice, or some similarly anthropomorphized and entirely passive facet of national identity. This essentialist conception of the role of nationalist women, Beatty claims, continues a historical trend of containing women outside of the political, while strengthening "an idealized vision of active masculinity” (24). Beatty explores this gendering of women's activity most clearly in the third chapter, "Organized Manhood." Here he considers the role of physical culture in constructing the Irish nationalist male. Through examining the founding of both the Gaelic Athletic Association and the Irish Volunteers, Beatty argues that military service and active sportsmanship were taken to have a recuperative effect on Irish men living under colonial rule by serving to retrain the male body while the Gaelic League trained the minds (68). While women were allowed play sports, and in fact Beatty notes the Camogie (women's hurling) league as a particularly progressive aspect of Irish culture, female athleticism was understood as a game, whereas men participated in sport: an apparently much more serious pastime. Likewise, male nationalists became soldiers and tacticians, while the Cumann na mBan (Woman's Auxiliary), were relegated largely to organizing social events and providing first aid (80).

Alongside this inherent sexism, Beatty's penultimate chapter, “Regulating Sex, Gender and Leisure in the Irish Free State,” focuses on the normativizing aspect of Irish and Zionist nationalism. This, perhaps the strongest example of Beatty's application of a comparative analytic, begins by examining Baruch Kimmerling's idea of the pre-1948 Jewish community in Palestine as a "state in the making" (187).  Herein, the unstable early state leans on pre-state organizations for support. In so doing, Beatty argues, the distinction between new state and pre-revolutionary society is blurred, enabling social (and socially conservative) ways of life to become the foundations of supposedly new political institutions (187). The newly minted Irish Free State, precariously composed of various, often competing, factions of revolutionary organization, was similarly uncertain about the longevity of its newly-gained freedoms. As such, the Catholic basis of morality and jurisprudence in the Free State is read by Beatty largely to be the result of an instance when the proto-state was turning pre-revolutionary morality into the basis for new political structure; just as Kimmerling saw occurring in Israel (188). Beatty reads the period following 1922, which some have called "counter-revolutionary"[1] not as a break with the past, but as a continuation: a projection of the masculinist fingerprint of the pre-revolutionary society into the future. In a particularly-careful and well-argued portion of the book, he searches for the "degree to which 'counter-revolutionary' elements...had long existed within the 'revolutionary' project with its utopian visions of a better society and a meritocratic national revival" (191). There is a sense, then, in which the revolutionary period led to a moral war within Ireland.

Beatty's primary instance of this mechanism is Frank Duff's founding of the Legion of Mary. Begun largely as a campaign against the Montgomery Street red light district, Duff turned a former hostel into a halfway house for "fallen women" (191). This amounted to a process of kidnapping prostitutes and locking them in "Enclosed Retreats" at the hostel. Duff's Legion of Mary was, then, a state supported group enforcing an extra-juridical and pre-state morality. An ideal image of the “clean” and “moral woman” was publically created by gangs of men kidnapping women off of the streets and holding them against their will. In this case, Beatty shows, the distinction between state, civil society, and Church became blurred; indeed,"[w]hat can appear to be a religious project (the moral renewal led by the Legion of Mary) was often secular at its core (the construction of an idealized national image, the control of women, and the maintenance of male power within a strict gender order, assisted by the police and government ministers)" (196). That this functional linkage between a historical ideal of masculinity, the Free State's political arm, and the Catholic morality of the proto-state was able to exercise a normativizing power over Irish society as a whole is, in many ways, the most salient and contemporary moment of Beatty's work.

Beatty's book takes a proud place next to other works on gender in the years surrounding 1916. While similar in aim to Joseph Valente's seminal The Myth of Manliness in Irish National Culture, 1880 - 1922, Beatty is distinguished by broadening his focus from the Victorian understanding of manliness read through an examination of exclusively high cultural artifacts. Rather, Beatty's work encompasses a much larger swath of early twentieth-century Ireland, and considers texts from all levels of society. This study is further differentiated through its comparative understanding of nationalism. This focus brings Valente’s study into dialogue with Joe Cleary's Literature, Partition and the Nation State: Culture and Conflict in Ireland, Israel and Palestine; although by widening the lens both chronologically and thematically within Ireland, and by tightening the comparative angle on specific aspects of gendered Zionist nationalism, Beatty's book furthers the projects of both and is irreducible to either.

While its comparative focus is one of the stronger aspects of Beatty's book, more could be drawn from the comparative Irish/Zionist angle. By placing Irish nationalist and Zionist masculinities next to one another, Beatty begins an important process of examining sexualized nationalism in these contexts; however, potential differences are quickly dismissed—such as  the distinction between Ireland's colonial and Zionism's diasporic contexts—in a way that could diminish the credulity of his cross-cultural methodology. While Beatty persuasively builds a framework for bringing together the Zionist and Irish forms of gendered nationalism, he avoids examining the very significant differences between the anti-colonial nationalism of Ireland and the diasporic Zionist consciousness. Such a consideration, far from undercutting his argument, would only foreground the more general applicability of the analytical tools he creates in this work.

Nonetheless, Beatty’s book stands out through its construction of a thematic framework for considering the link between masculinity, sexism, and nationalism. Though born of an Irish and Zionist comparative effort, these thematic examinations—focused on language, space, physical culture, land use etc.—are applicable in diverse contexts. As such, this volume will find appreciative readers not only within Irish and Zionist studies, but in fields more broadly concerned with questions of nationalism and gender. For those concerned with the practical value of work on history, this book's publication is all the more important when one considers not only the centenary of the Irish revolutionary period, but more significantly, the rise of sexist nationalism around the globe.