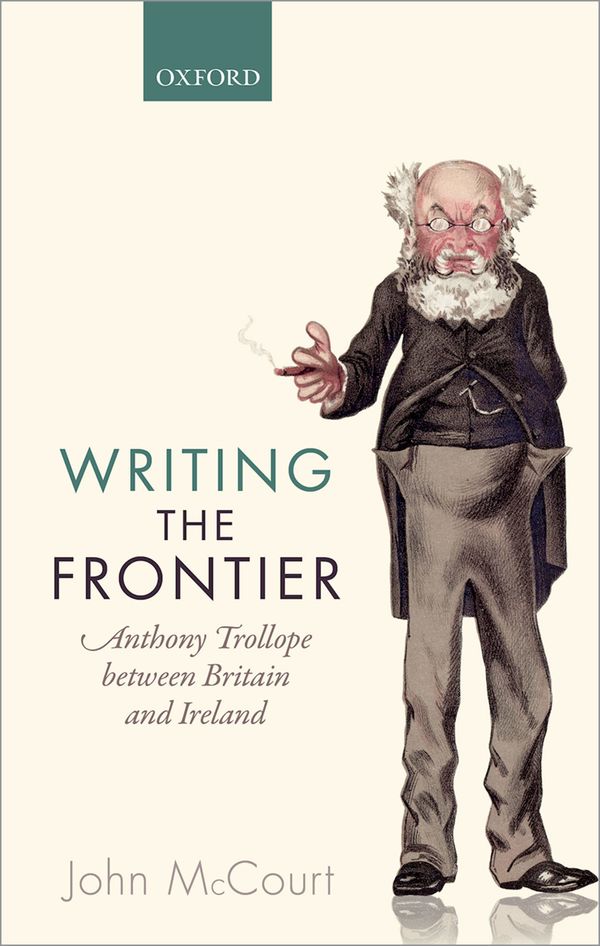 Although Anthony Trollope became famous as a writer of novels about provincial and parliamentary life in Victorian England, his writing career in fact began and ended in Ireland. Trollope moved to Ireland in 1841, having successfully volunteered for the job of clerk to one of Ireland’s three postal surveyors. His London colleagues regarded this move as suicidal, but it was an altogether sagacious decision: not only did it enable Trollope to resuscitate his failing career, it also brought him a sense of belonging. His experience provided the subject matter and inspiration for his first two novels, The Macdermots of Ballycloran (1847) and The Kellys and the O’Kellys (1848). Trollope would occasionally return to Irish topics after his move back to England in 1861, when he became surveyor of the Eastern district in England, as in Castle Richmond (1860), Phineas Finn (1869) and its sequel (1874), and An Eye for an Eye (1879). In his final and unfinished novel, The Landleaguers (1883), Trollope fictionalizes the agrarian agitation that rocked Ireland in the late 70s and early 80s.

In Writing the Frontier: Anthony Trollope between Britain and Ireland, John McCourt provides a panoramic overview of Trollope’s interest in Irish affairs. McCourt’s thesis that Trollope styled himself as a “cultural mediator” (3) between Britain and Ireland is conclusive and serves to correct the image of Trollope as the embodiment of Englishness; even if to many of Trollope’s readers this notion has become moot, it still lives a half-life among scholars whose interests lie elsewhere, as well as among the general public. McCourt’s book is structured in a loosely chronological fashion: after a general introduction in which he situates Trollope’s life and work in the context of the political and literary history of nineteenth-century Ireland, the first three chapters examine the question of justice in Trollope’s first two novels, his ambivalent attitude toward the Famine in Castle Richmond, and the vexed issue of Anglo-Irish identity in Phineas Finn and Phineas Redux. The following three chapters are less concerned with particular novels, but highlight and analyse particular elements that unite Trollope’s Irish writings: Trollope’s interest in the Irish clergy, his depiction of marginal Irish identities in the short stories, and his command of Irish English. The study concludes with a discussion of Trollope’s last novel, The Landleaguers, in which Trollope responds to contemporary Irish troubles with an uncompromising support of harsh economic measures—a stance that he first evinced in Castle Richmond.

As Writing the Frontier progresses, it becomes apparent that it does not participate in a more general movement in Trollope studies, led by Deborah Denenholz Morse, to reclaim Trollope as one whose conception of nationhood “became increasingly liberal” toward the end of his career.[1] McCourt is clear that Trollope’s attitude toward Ireland was determined by paternalistic colonialism. In his early works, this attitude paradoxically showcases Trollope’s progressive credentials. Many of his English contemporaries were happy to ignore or dismiss Irish problems, often lapsing into caricature and stereotype. Trollope, in contrast, tries to present Irish issues from an Irish point of view, portraying Irish conditions with sympathy and suggesting that Ireland could be set on the road to progress by adopting English practices. Despite these good intentions, later generations would (not without some justification) perceive this stance as reactionary. Indeed, even as public opinion shifted toward some idea of Irish Home Rule, so McCourt argues, Trollope retreated into an increasingly outdated form of Unionism. By showing how consistently Trollope held on to his beliefs even as he recognized that circumstances had rendered them obsolete, McCourt’s thesis links up with Lauren M. E. Goodlad’s study of Trollope’s colonial cosmopolitanism.[2] Even at this point of intersection, however, it is up to the reader to make connections to scholarship in Victorian studies, of which McCourt is certainly aware, but with which he seems reluctant to engage.

Rather, McCourt’s approach seems to be a revisionary one. His book continues and, perhaps, crowns a historiographical tradition of writing about Trollope and Ireland, of which Owen Dudley Edwards and R. F. Foster are arguably the most important representatives.[3] At the outset, he announces that “Ireland only peripherally impinged upon the English nineteenth-century novel,” thus distancing himself from “contemporary critic[s] who think “that Ireland was a core preoccupation of English fiction” (27). McCourt proposes to tread a safer path and to confine himself to those writings that are explicitly concerned with Ireland. Blending political history and literary criticism, Writing the Frontier situates Trollope’s writings firmly in the context of Irish history and the history of the Irish novel. Although the book’s pace is leisurely—at one point, the same passage is unfortunately cited twice in the course of three paragraphs (114–115)—McCourt’s attention to the social and intellectual network in which Trollope moved reveals many facts that will be new to the scholar of Trollope’s novels.

While this revisionary approach is sound, McCourt might have given himself some more leeway. He briefly strays from the lines he sets out for himself when he suggests (echoing similar observations by Foster and Dudley Edwards) that “[t]hroughout the Palliser series, Trollope challenges English preconceptions about Ireland through reversals, by giving significant English characters Irish or Irish-sounding surnames and, sometimes, stereotypical Irish traits” (141). This could be taken further; given McCourt’s fairly irrefutable claim that Ireland occupied a central place in Trollope’s imagination, one could be forgiven for wondering about the impact of Irish affairs on his other output. As Francis O’Gorman notes in his introduction to the recent OUP edition of Framley Parsonage (1861), for instance, the Irish issues that he had been pondering while writing Castle Richmond (which he put aside) continued to linger in Trollope’s mind: his “narrative of insecure homes […] are oblique transformations of Irish troubles, of the tenantry problem.”[4] The fact that an attention to echoes such as these falls beyond the scope of McCourt’s book is, of course, a conscious decision, motivated by a principled stance as well as practical constraints. As such, this study should prompt other scholars to further explore the relation between the matter of Ireland and Trollope’s other productions.

When McCourt moves to the level of close reading, he opts for a thematic approach. At the heart of Trollope’s Irish novels, he detects concerns such as the tragedy of dispossession and the question of justice. This approach is at its strongest in McCourt’s discussions of The Macdermots of Ballycloran, The Kellys and the O’Kellys , Castle Richmond and An Eye for an Eye. The chapter on Phineas Finn and Phineas Redux unfortunately veers toward paraphrasis; McCourt’s penchant for dense contextualization elsewhere might have been played off here, to great effect, against Elaine Hadley’s discussion of the notion of occupation in Phineas Finn.[5] His focus on the surface textures of Trollope’s writings does not imply that McCourt altogether ignores formal and stylistic matters—far from it. His chapters on Trollope’s short stories and on Irish English are particularly interesting, but a concern with form is latent in many of the thematic readings. McCourt draws the reader’s attention to the formal sophistication of Trollope’s novels in his introduction, where he takes issue with J. Hillis Miller for failing “to credit Trollope for the often deeply embedded counternarratives in his novels” (5). Even though J. Hillis Miller is not the right Aunt Sally to tilt at, McCourt deftly unravels such counternarratives. To this end, he sketches a succinct but precise short history of the Irish nineteenth-century novel, paying particular attention to such elements as the genre of the national tale, the influence of the gothic, the Irish novel’s focus on community, social concerns, and dialect, as well as the burden of communicating sociological information—all of which set the Irish novel apart from mainstream Victorian fiction. McCourt also repeatedly situates Trollope’s Irish works against English and Irish narrative traditions; the contrasts and affinities he detects with the work of William Carleton, in particular, are illuminating.

In spite of his attention to counternarratives, McCourt is not in favor of reading against the grain. Although he concedes “the validity of [the] risky readings” put forward by recent critics who highlight “aspects that appear to have gone unnoticed in contemporary criticism” (27), the designation as “risky” and the charge of a-historicism qualify his acknowledgement. Even on these terms, it is a pity that McCourt is not receptive to the ambivalence in the counternarrative that he—like contemporary critics—finds in The Landleaguers. In his chapter on this novel, “Countering Rebellion,” McCourt perceptively shows how Trollope sets up an analogy between Florian Jones, the landlord’s son, who is made part of a conspiracy against his father, and Rachel O’Mahony, an American demagogue’s daughter, who tries to secure a living on the stage. Both characters, according to McCourt, are ciphers for Ireland: “The lack of guidance for these two young characters suggests a more general lack of authority in the Ireland they are supposed to represent” (263). Even so, he is dismissive of the novel’s parallel plot: “rarely in Trollope has the connection between the plotlines seemed more awkward” (259). While previous critics have shared this assessment, it is still worth questioning. I would argue that Florian Jones’s equivalent in the London plot is not Rachel O’Mahony but her impresario, Mahomet M. Moss. Jones’s sisters call Florian’s conversion from Protestantism to Catholicism “beastly,” a word that that echoes throughout Rachel O’Mahony’s fight with this man.[6] Both are also caught in between different religions: Florian Jones between Catholicism and Protestantism, and Mahomet M. Moss between Islam and Judaism. Their affinity is duplicated in the story’s action: Jones ends up with a bullet in his head and Moss with a dagger in his guts. This resemblance is important. Trollope’s choice to set a plot in the world of the theater has thematic repercussions, since for terrorism and as well as for the theater it is the impact on the crowd that counts rather than the value of the performance or action itself.[7] Jones and Moss are both consumed by the system of which they are subjects. Rachel O’Mahony, in contrast, escapes and acquires a degree of independence. Her struggle to be free from want and from hunger, reinforced when she falls ill, stands in a striking contrast to the violent practices of the Land League, as well as to the colonial cosmopolitanism that the narrator advocates. She thus symbolizes a road not taken, that of culture. It is for this reason that, in my view, The Landleaguers is not conservative, nor liberal, but considerably more advanced, like many of Trollope’s late novels.[8]

The point of this admittedly hasty interpretation is not to challenge the validity of McCourt’s analysis but to show that a willingness to push at the edges may complement the image of Trollope that he puts forward. I am merely offering it as an example of how richly provocative to further thought Writing the Frontier is, even beyond its own revisionist ambitions. The picture of Trollope that emerges from McCourt’s book may seem familiar at first sight, but the level of detail with which it is dealt with serves to upset many cherished beliefs, challenging ingrained prejudices about Trollope’s Englishness as well as complicating recent claims about his progressive credentials. McCourt’s significant contribution to Trollope scholarship will thus be a standard in discussions about Trollope and Ireland in the years to come. Perhaps most importantly, it should once and for all force scholars to give Trollope’s novels the prominent place in the history of Irish literature that they deserve.

[7] Mark Juergensmeyer, Terror in the Mind of God: The Global Rise of Religious Violence (Berkeley, Los Angeles and London: University of California Press, 2000), 124.