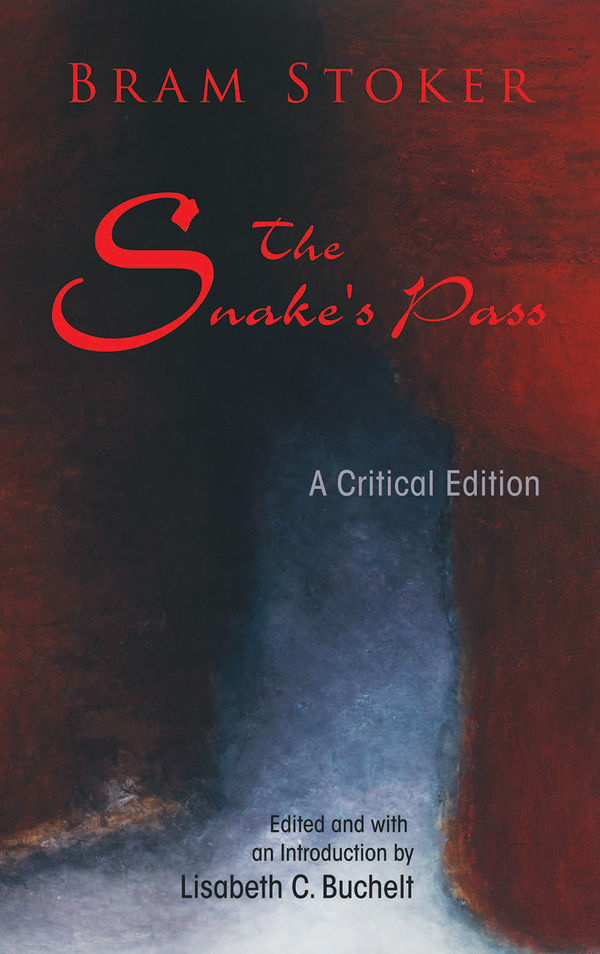 Although Bram Stoker was born in Ireland and educated at Trinity College, he is often associated with Transylvania, a place that he never visited, because of the enormous popularity of Dracula. Lisabeth C. Buchelt’s The Snake’s Pass: A Critical Edition reminds readers of the numerous reasons to think of Stoker as an Irish writer. In addition to his birth and education, he spent ten years working as a civil servant during which he travelled around Ireland, learning its folklore, taking notes on its topography, and thinking about both its political past and its future. Although he left Ireland in 1878 when he joined Henry Irving’s Lyceum Theatre as business manager and spent the rest of his life in London, he thought of himself as Irish and often commented on Ireland’s place in the world.  In addition, though he is generally described as a Gothic writer, his reputation frequently subsumed by the popularity of his best-known work, Stoker wrote eighteen books—of which only three should be classified as Gothic.

Buchelt’s splendid new critical edition does a great deal to correct these misconceptions. Not only does it introduce readers to the non-Gothic Stoker, it also demonstrates that The Snake’s Pass, his only novel set in Ireland, is his way of addressing uniquely Irish issues and colonialism in general. As such, it would be an excellent addition to classes in Irish Studies, colonial studies, and to courses that focus on the fin de siècle. While the critical apparatus makes the volume appropriate for an academic setting, Buchelt has done an excellent job of making Stoker’s novel accessible to the non-academic reader as well, and Syracuse also published multiple editions—hardback, paperback, and e-book version—for a variety of audiences.

The novel itself includes a search for buried treasure between English tourist, Arthur Severn, and Norah Joyce, the daughter of an Irish farmer. Notably, this tale introduces Stoker’s interest in personifications of evil (here represented by the gombeen man or moneylender, Black Murdock) as well as his hope that science and technology will provide hope for the future. Later in the story, Arthur, with the help of engineer Dick Sutherland, manages to save Joyce’s farm from the shifting bog, which is presented as a representation of Irish identity, and also save Norah from the lascivious moneylender. The novel concludes with the anticipated marriage of the youthful hero and heroine and with the prospect of a community much improved by scientific and technological developments.

Buchelt introduces this story with “‘Being of Ireland’: An Introduction to Bram Stoker’s Irish Novel,” which includes a brief biographical sketch of Stoker and provides an overview of critical approaches to the text over the years. It concludes with a not-so-subtle reminder to readers who think of Stoker only as the author of Dracula: “The Snake’s Pass is another work in Stoker’s oeuvre that shows him to be a good—perhaps even a great—writer, not just a writer of one good—perhaps great—vampire novel” (xxii).

Of course, the proof of Stoker’s greatness is the novel itself, which Buchelt annotates thoroughly with footnotes on everything from the meaning of common Irish words such as “Musha” and “Sheebeen” to the politics of the time. Readers will come away from this edition with a thorough understanding of the events that led up to the establishment of the Land League to Stoker’s use of Biblical allusions and Irish mythology to his references to Irish geography. Even though I’ve read The Snake’s Pass at least a dozen times, I came away from this reading with a greater understanding of Stoker’s novel as well as with an appreciation of its place in the Stoker canon.

One can always learn more, of course, and Buchelt follows the annotated text with a short (two-page) bibliography that refers readers to book-length studies of Stoker and essays that focus on The Snake’s Pass. Following the bibliography are six contemporary (1890 and 1891) reviews of The Snake’s Pass in periodicals such as The Athenaeum, The Academy, and Murray’s Magazine: A Home and Colonial Periodical for the General Reader. The reviews are especially important because they demonstrate that Stoker’s contemporaries saw him as Anglo Irish and recognized both his awareness of nineteenth-century Ireland and his contribution to Irish literature.

Aside from the novel itself and its annotations, the longest section is the four excellent critical essays. Not only are the essays illuminating in their own right, but they will help to introduce readers to a range of critical approaches to the novel. Mark Doyle’s “The Snake’s Pass and the Irish Question(s)” provides a solid introduction to Irish history while “’For Ireland’s Good’: The Reconstruction of Rural Ireland in Bram Stoker’s The Snake’s Pass” by William Hughes examines Stoker as a specifically Irish writer. “The Snake’s Pass and the Limits of Romance” by Nicholas Daly looks at similarities between Stoker’s novel and other fin de siècle adventure romances by Stevenson and Haggard and also points to the way that Stoker adapts the convention of the colonial marriage plot he had inherited from his predecessors. Finally, “The West as Metaphor: A Reading in Word and Image” by Síghle Bhreathnach-Lynch points readers to other writers and painters who had examined the west of Ireland in their works. Buchelt concludes her critical edition with a chronology leading up to the publication of The Snake’s Pass in 1890 and notes on contributors.

Buchelt’s critical edition to The Snake’s Pass is impressive and definitely belongs in the library of any serious student of Irish literature, turn-of-the-century literature, or Bram Stoker. It’s so good that I’d consider using it in an undergraduate class that I teach regularly, “Evolution and the Industrial Age,” which focuses on the relationships among science, technology, and culture.  I know my students would protest at the hefty price of $34.95 for the paperback edition, however.

In addition to the relatively high price, which might not phase either graduate students or students of Irish literature and culture, I’d like to see some other changes if Syracuse and Buchelt decide to issue subsequent editions. Since the book was issued as part of the Irish Studies Series, I can understand why it focuses on the Irish context of The Snake’s Pass. Still Stoker’s villain here—Black Murdock, his gombeen man—is a predecessor of Dracula, his greatest and most memorable villain, and much of the criticism of this early novel explores that connection. I also wish that the edition included some of Stoker’s occasional pieces on Ireland, at least the two that he wrote in 1907 for the special Irish edition of The World’s Work. Neither of these essays is especially easy to locate, yet both reinforce Buchelt’s point that Stoker was influenced by what was happening in Ireland at the time he was writing this novel. Finally, I wish the edition included a more complete bibliography. Even if it focused entirely on the Irish background of The Snake’s Pass, it should have included Joseph Valente’s Dracula’s Crypt: Bram Stoker, Irishness, and the Question of Blood, which is one of the first studies to focus on Stoker as an Irish writer. The bibliography also would be improved by mentions of David Glover’s Vampires, Mummies, and Liberals: Bram Stoker and the Politics of Popular Fiction and The Un-Dead: The Legend of Bram Stoker and Dracula by Peter Haining and Peter Tremayne. These are relatively minor criticisms of a book that is an essential addition to the Stoker canon. If you are interested in turn-of-the century literature, Irish Studies, or Bram Stoker, Buchelt’s critical edition of The Snake’s Pass belongs on your bookshelf or—if you are a poor scholar—on the shelf of your favorite library.