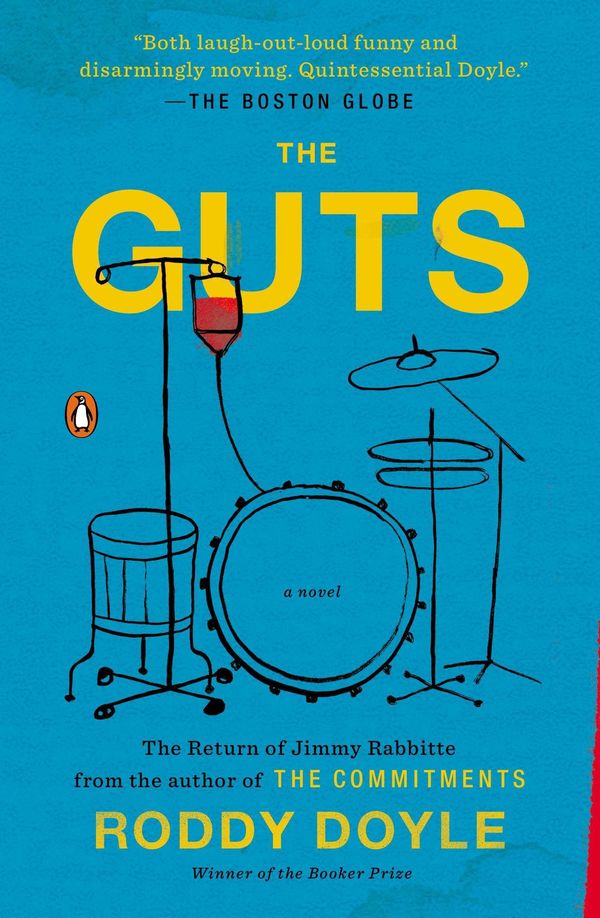 In a way, Roddy Doyle has never stopped writing about Jimmy Rabbitte. The Guts, the sequel to his very first novel The Commitments, brings Doyle’s oeuvre full circle through the development of his character Jimmy Rabbitte Jr., whose fortunes once more parallel those of his native Dublin. In both works, Doyle explores the dynamics of human connection through Jimmy’s relationships with family and friends, though in The Guts the extroversion of youth is replaced by the middle age introversion that comes with family responsibilities and a direct encounter with mortality.

The first installment of the Barrytown trilogy (The Commitments, The Snapper, The Van) introduces Jimmy as a hard-working young band manager during the economic recession of the 1980s. Feeling a connection with the disenfranchised people of the world he claims for his band an African American musical identity. This hybridization creates an international connection that stretches the boundaries of family and belonging. Jimmy appears again in the titular short story of Doyle’s collection The Deportees, though this time, Jimmy finds himself in the middle of the 1990s economic boom. Mirroring the optimistic times that attracted migrants to Ireland, Jimmy’s success is due to his ability to bring together musicians from different parts of the world, thus forging a new multicultural Irish identity and forcing the reader to pose questions such as: “Who is Irish?” and “Who is family?”

Although there is no direct reference to Jimmy in Doyle’s post-Celtic Tiger recession collection Bullfighting, Doyle confides to Sarah Crown that the stories are still about Jimmy: “I'm actually writing about Jimmy Rabbitte again, as a man in his mid-40s. I thought it'd be interesting to see how he perceived the world today: he went through the recession, married and had children during the boom, and now everything's gone belly up.”[i] It is not surprising then that “Sleep” foreshadows The Guts by featuring a father who has just found out that he has colon cancer.

Highlighting the importance of family ties, The Guts opens with Jimmy having a pint with his dad and telling him he has cancer of the bowel, even before he tells his wife, Aoife. In this scene, Doyle manages to strike a perfect balance between poignancy and humor, so that the result is a moment of truth in the relationship between father and son where each is confronted with the other’s mortality: While Jimmy Jr. notices how his father is getting older and slower, Jimmy Sr. faces the possibility that he will outlive his son.

As in Bullfighting, the personal supersedes the political in The Guts; the focus is on Jimmy’s health and family. Rather than exploring new identities and connections through diverse cultural encounters (as was the case in The Commitments and The Deportees), Jimmy now faces himself, or rather, a different version of himself brought about by aging and illness. The “other” that he must confront here is an inner stranger that demands all of his attention. Jimmy’s illness echoes the ailing Irish economy as both are threatened with a bleak future. As a result, both turn inward, relegating multicultural Dublin to the background and using their waning energy to survive.

Indeed, Jimmy just manages to stay afloat thanks to his and Aoife’s business acumen that first prompts them to create www.kelticpunk.com, a company that promotes old bands reunion gigs, and then to sell most of the business before the recession hits:

Three years into a recession that still felt like it was just starting, life was a bit safe – if he forgot that he had cancer for a minute. He got paid every month and still owned a chunk of the business. He still ran kelticpunk, but Noeleen ran him…. He had the safety of a salary, a pension, the VHI, a home he owned, and a bonus – so far - at the end of every year. The world was in shit but shiterock was making money.

And this is the crux of the story; there is a part of Jimmy that believes that giving control of the business to Noleen is what brings about his cancer:

There was once – just once, and he never mentioned it to Aoife – the thought it had kicked off the cancer. He was literally going to end up what he was – gutless. And dead. He’d pushed the thought away. But the decision, the weeks leading up to it, had felt like physical pain, across his head, in his face, in his shoulders, through his stomach. . . .He’d had something special, and he’d lost it. He’d given it away.

For the sake of his family’s financial security, Jimmy compromises his independence. However, the surrender of his freedom does not avert the anticipated calamity; it only changes its nature. What Jimmy now encounters is not a financial crisis, but a physical one. Though he does not face it alone.

In a very real way, Jimmy’s cancer presents him with the opportunity to heal and reaffirm all of his human connections. For example, Jimmy loves how the whole family is getting closer as a result of his cancer, to the point that he confesses to Aoife in the safety of their bed that he “ –Spent the whole day tellin’ people I love that I’ve cancer, and I enjoyed myself” (36). Jimmy’s illness also brings about a rapprochement with his brothers: He reaches out to Les who lives in England and begins to cultivate a relationship with his distant brother, Darren.

Another connection in need of healing in Jimmy’s life is that of friendship. Since the breakup of The Commitments, Jimmy has isolated himself to the point that Aoife confronts him with the declaration: “You’ve no friends” (234). Doyle underlines the importance of old and new friendships when Jimmy is revitalized after he reconnects with old band mate, Outspan, who has the bad cancer (of the lungs) and by his new friendship with Des, his trumpet teacher.

Aoife is the love center of Jimmy’s life and his illness reaffirms their deep connection. Her unwavering support is epitomized by her loving gifts: First the Chemotherapy and Radiation for Dummies book, meant as a joke, and then her gift of a trumpet. According to Doyle, “The trumpet is her love letter saying you’ll be there next year. Because he’s not altogether sure he will be.[ii]” Although Jimmy has a brief affair with Imelda, a former singer for The Commitments, it is clear that for him, “[the sex] felt like an achievement” and a way to “push…all the worries and doubts away” (168). This is Jimmy’s way to tap into the vitality of his youth and strengthen his middle-aged self. Thus, we are ready to believe him when he seems to claim that the cancer made him do it.  The fact that we do not witness the actual sexual infidelity helps to further minimize his act of adultery.

Doyle effectively grounds Jimmy’s cancer in everyday life by having him grapple with the small details and practicalities that go along with the illness: from telling his family about his cancer and his boss to the “cancer trousers” (112) he has to wear. In this way, Doyle normalizes the experience of cancer without minimizing it, even when Jimmy refers to the need to inform people of his disease as just another unpleasant social chore that requires tact so that no one gets offended: “-I’ve to tell …-fifteen or sixteen people that I have cancer. And I’ve to do it in a rush so no one feels upset because I told him or her before I told him or fucking her” (26). By sandwiching his preparation for chemotherapy between his job and family, Jimmy also proves that life goes on: “He beat the snow off his head, and remembered. He has to get himself scalped. There was a barber a bit down from Insomnia. He’d trot down thereafter he’d told Noeleen he was dying” (43). This matter-of-fact attitude in the face of possible death is what ennobles Jimmy’s struggle.

Another strength of the novel is how well Doyle succeeds in sidestepping facile sentimentalism by avoiding certain emotionally-charged scenes. For instance, we do not see Jimmy tell his mother that he has cancer directly. Instead, we hear him discuss how she reacts to the news with his brother Darren. In addition, while we witness the first chemotherapy session, Doyle confines it to nine lines, which consist primarily of an exchange about the weather between Jimmy and the nurse and his joke about having “ice an’ lemon” (133) with the chemotherapy.  Only three of these lines address what is really happening: “He watched her work. The saline bag, the stand, the red digital numbers going on, off. Why did they have to be fuckin’ red? She hooked the bag to the top of the metal stand” (133).  All of the anguish that Jimmy feels is distilled down to that one question. The red numbers “going on, off” (133) thus become not only a sort of macabre count down, but also the slow tipping of the scales towards life or death. To counteract the poignancy of such a scene, Doyle gives us a less well-known and even positive side-effect of chemotherapy: the enhancement of his taste buds. By focusing on this unexpected gift from his illness, Jimmy is able to share one piece of good news as his first commentary on his very first session of chemotherapy with Aoife, demonstrating how his positive attitude is rooted in his deepest human connection.

Underlying it all is Jimmy’s love for music, the healing agent that reinforces his ties to his family. When Jimmy gets the all-clear, Doyle has him compose a new song and create a new fake band with his sons, as a symbol of his physical and spiritual rebirth. Throughout, the trumpet Aoife gives him becomes his lifeline, reaffirming Jimmy’s determination to get well: “He looked at himself holding the trumpet. He liked what he saw. The chemo could fuck off” (121). This attitude is what helps Jimmy survive, not just the cancer itself, but his daily struggle with the illness. He is the warrior in “cancer trousers,” (112) whose battle is presented in terms of domestic transcendent moments that feel so true, so on point that all we can say is, as Doyle himself would put it, “yeah, yeah, yeah.”

In The Guts, Doyle once more explores the Irish psyche in a moment of crisis by resurrecting a beloved character who evokes in us our visceral need for meaningful human connection. This time, not by crossing the boundaries of race and nationality, as he has done in The Commitments and The Deportees, but, as in Bullfighting, by migrating from one self into another, moving through time and space along the spectrum of the many selves and identities that make up the human journey from birth to death.