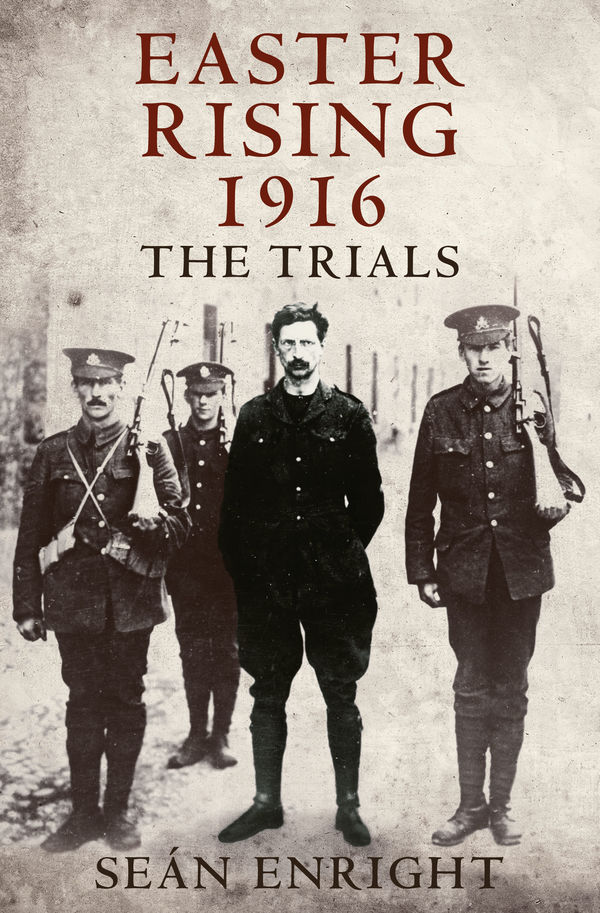 During his trial at Richmond Barracks on May 2, 1916, Patrick Pearse stated, “it is my hope that the British government who has shown its strength will also be magnanimous and spare the lives and give amnesty to my followers, as I am one of the persons chiefly responsible, have acted as Commander in Chief and president of the Provisional Government” (Qtd in Enright 90). After Pearse and his comrades fought under their Proclamation of the right of the Irish people to “national freedom and sovereignty,” their trials and execution undermined this assertion and reified the legal authority and legitimacy of the British system in Ireland. As Seán Enright points out in his introduction to Easter Rising 1916: The Trials, “attaining belligerent status is the most difficult aspiration of every revolutionary movement and for the leaders of the 1916 Rising it was beyond their grasp” (1). This book examines the competing definitions of “justice” under the British colonial administration in Ireland, while illuminating the motivations of the leadership and rank-and-file of the Easter Rising themselves.

Enright’s work pivots on the legality and legitimacy of the trials, as perceived by the prisoners, as well as the British military officials. In his first three chapters, Enright emphasizes the secrecy that characterized the trials and subsequent executions, which sit in stark contrast to the public spectacle of Easter Week. Most of the 3,226 men and women insurgents arrested under the direction of General John Maxwell were detained at Richmond Barracks in Dublin, and 1,867 deported to the Frongoch internment camp in north Wales.  Between May 1 and July 3, 1916, the British government tried 171 prisoners. Although Enright describes these military courts-martials as “capricious” and “haphazard,” the secrecy surrounding the trials paradoxically suggests their potential to “strike at the foundations” of a colonial society in the midst of the brutality of the Great War (50). This is reflected in the standard charges leveled at insurgents—‘‘participation in an armed rebellion and in the waging of war against His Majesty the King” and with “the intention and purpose of assisting the enemy” (Qtd in Enright 57). As Enright reminds us, the problem of due process had profound implications for martial law on the western front, as well as American public opinion on the Irish question. In this respect, the author draws our attention to the practical and inescapable issues concerning individual citizenship and national self-determination in wartime.

In Chapters 4-9, Enright outlines the legal processes that structured the trials—examining the evocation of the Defense of the Realm Act by Maxwell and Prime Minister Asquith; the suspension of jury trial for the leaders; the use of the tribunals as an expedient response to the rebellion; and the debates amongst military leaders, the Irish public, and the British government over the executions. The book argues that the trials represented a reaffirmation of British colonial authority over Ireland; furthermore, the “derogations of due process” committed by the authorities reveal the tenuous legal structures that supported colonialism itself (42). Along with succinct biographies of the British army officers who presided over the tribunals, Enright provides background information regarding their legal training, combat experience, and interactions with the captured rebels. As these accounts suggest, senior military officials improvised an expedient solution to an unprecedented colonial emergency, with the interest of minimizing the dangerous political reverberations of the Rising.

In Chapters 10-46, Enright briefly recounts the trials of the main leaders of the Rising, as well as the ordinary members of the Irish Volunteers and the Irish Citizen Army who fought at the various garrisons throughout Dublin. There are also two chapters devoted to the trials of participants outside of Dublin; at Ashbourne, Cork, and elsewhere. Those who faced the Military Courts experienced a rapid process of arrest, detention, and prosecution, followed by execution or imprisonment. Prisoners were denied legal representation and most did not have the chance to call witnesses or provide evidence in their defense. Without any of the customary legal protections of a General Court Martial, the Easter Week trials represented a brutal form of justice. During these rapid-fire trials—most of which lasted no longer than fifteen minutes—the accused defended themselves as being members of a military organization who were simply following orders. Others testified that they had no idea a rebellion would take place, and did not intend to cause wanton injury to civilians; or that they had gathered for a training session, unaware that the Rising was commencing. After pleading “not guilty” to the standard charges, Jack Plunkett (brother of Joseph Mary Plunkett) stated that “I was fighting for Ireland, if I was fighting not for Germany—I had no intention of helping any enemy of England, unless Ireland is an enemy—I absolutely deny that I attempted to cause disaffection among the civilian population” (Qtd in Enright 101). Initially sentenced to death, his sentence was commuted to ten years penal servitude.

By devoting his attention to the lesser-known trials of many of the participants in the Rising, Enright has made an incisive contribution to the historiography of the Irish revolutionary period. In this sense, Enright’s work completes a trilogy of books about the legal machinations that were implemented to thwart the revolutionary impulse; alongside Brian Barton’s, The Secret Court Martial Records of the Easter Rising (2010) and David Foxton’s, Revolutionary Lawyers: Sinn Féin and Crown Courts in Ireland and Britain 1916 – 1923 (2008). This book represents a valuable resource for historians and student researchers, combining Enright’s accessible analysis and succinct narrative with extracts from the proceedings of the trials themselves, many of which were previously unpublished.