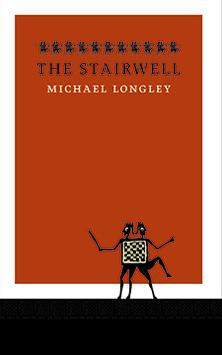 Even in the House of Death something remains,

A ghost or image, but there’s no real life in it.

Did I imagine him?

Michael Longley’s latest collection, The Stairwell, finds doubles and twins everywhere, a pursuit occasioned, perhaps, by the death of Longley’s twin brother, Peter. Unlike some recent volumes on the loss of a family member (such as Mary Jo Bang’s Elegy or Anne Carson’s Nox), The Stairwell is not an extended meditation on the deceased and the aftermath of his death; indeed, poems explicitly about Peter comprise only the last third of the book. Instead, the volume shows the surviving twin working through questions of what remains in the House of Death, in part to establish what the poet can count on to survive him in the House of Life.

The terrain of this book feels very familiar to longtime readers of Longley’s work. There are poems written from idyllic Carrigskeewaun, closely observed nature poems, considerations of the lives of World War I soldiers, renderings of The Iliad, and, of course, elegies. What is different this time around is the way these often disparate topographies are made to reflect each other: a mallard imitates the island of Inishturk, “duck-like on the horizon” (16); the speaker’s father is implicitly compared to fellow soldiers and alter egos Second Lieutenant Tooke and Ronald Colman; and modern figures are made to resemble Homer’s Greeks. The accretion of all these doubles becomes dizzying in the best sense, so much so that the differences between the figures begin to fall away, leaving only the essences that unite them. The lines from “The Apparition” cited above enact this stripping away of difference. In them, Achilles laments his encounter with Patroclus’ ghost in Book XXIII of The Iliad, but they might just as well be Longley’s speaker ruminating on his brother. This is precisely the point: where grief is concerned, the boundaries between figures matter very little. By erasing these boundaries, Longley is able to make his grief echo across millennia.

However, Longley knows better than to trust poetic figuration completely. Just because two things can be made to look alike, it doesn’t mean they really are. Longley makes this clear in “Face,” in which, after translating a particularly graphic description of a spear ripping through a soldier’s mouth in The Iliad, the speaker observes,

Homer gets no nearer than this

To the anonymous Tommy,

His human face blasted away.

What can surviving hands reach up

Longley’s speaker is thwarted in his desire to connect Homer’s experience of war with that endured by WWI soldiers (and, by extension, with that of his father, a project that Longley has been undertaking for some time now). As much as the poem seems set to create another of the volume’s parallels, its real subject is the failure of the metonymy, illustrating that even Homer’s close examination of wartime violence can shed no light on the aftermath of a kind of war he never could have imagined. And yet Longley’s imagery here is more than up to the task of filling this void with the pounding spondees of tongue-stump and soul-meat. In this poem, Longley reveals his basic strategy of finding parallels, breaking them down, reasserting the consolatory power of language, and then exposing that consolation for the meagerness it is. The approach is at once naïve and knowing, reveling in language’s effects even while asserting its limitations.

All of these doublings, and especially the collection’s focus on Longley’s twin brother, raise suspicions that elegizing Peter is really a way for Longley to elegize himself. Certainly, death is on the speaker’s mind throughout the volume. The title poem begins, “I have been thinking about the music for my funeral” (13) and the next several poems consider the act of leave-taking, with titles like “Deathbed” and “Absence.” However, the things of the world are simply too present for the speaker to turn away from them for long. He comes to take solace in them, freighting them with the task of ensuring his continuation after his own death. “Deathbed” is really an anecdote about robins that the speaker’s friends allow into the house, the speaker declaring, “When I die I shall give them all their names. / . . . / I’ll leave the window open for my soul-birds” (14). Longley here is claiming parts of the natural world for himself, but, it seems, more out of love for that world than out of an anxiety about his looming absence from it. As a result, his strategy in this collection of elegies is ultimately less to write himself into his poems of remembrance than to write himself into the world that will survive him.

This treatment is extended to Peter, too. The last few poems of the collection’s second half move from remembrance to daily life, illustrating Peter’s absence, but also the ways in which he cannot help but be present in the speaker’s quotidian experience. “The Birthday” marks the occasion of the speaker’s first birthday without Peter—an especially poignant milestone for a twin whose birthdays have always been shared events—asking, “Where are you now? . . . / Have you been skinny-dipping at Allaran?” The list goes on, increasingly consisting of activities that it is clear the speaker is doing himself, including boiling beets for dinner (about which he asks, “Will your pee be pink in heaven?”) (73). Despite the speaker’s awareness of Peter’s ultimate return to the House of the Dead, he gives himself to poetry’s ability to restore the brother who isn’t there, even if only in language.

This is a different kind of elegy from that which Longley usually writes. Typically his elegies feature some kind of memorial gesture or token. Such acts of remembrance frequently figure as interruptions to daily life rather than invitations into it. In “Heron,” for example, from 2004’s Snow Water, Longley’s speaker tells of how Kenneth Koch’s death surprised him at Carrigskeewaun, deciding as an impromptu gesture, “You are so tall and skinny I shall conscript a heron / To watch over you on hang-glider wings. . . .”[1]  Elegies like this work well as one-off, public gestures, but they do much less to speak to the daily experience of grief than does the apostrophized, almost happenstantial approach of “The Birthday” or “The Duckboards,” the latter of which seems not to involve Peter at all until the final few lines, in which the speaker mentions “our father’s ghost” (74). Here, Peter is so imbricated in the speaker’s thoughts that he appears only as part of a casual “our.” This is ultimately a more meaningful tribute than a heron, proof that the absence of the body does not have to mean an absence of the self. While a strong elegiac streak has always run through Longley’s work, the poems of The Stairwell show him learning to treat grief as something to live with instead of something to act on, making for as many kinds of elegies as there are daily events. The result is a less staged and less rhetorical approach to remembrance than his earlier elegies, producing an even more nuanced and intimate meditation on the intertwinings of life and death than those that appear in Longley’s already subtly attuned corpus.

In the collection’s final poem, “The Fire,” Longley looks ready to have done with the whole elegiac project, putting both his brother’s body and the volume that remembers him to the crematory flame. Even here, though, something greater survives:

Can you hear the wind in high branches

Howling at its angriest, a bellows

That kindles sparks in hillside clearings

And incinerates the whole woodland? (76)

This final image is cataclysmic, but it is also timeless. Particular personal griefs are transformed into elemental figures of wind, flame, and woodland. What matters is not the forest, but the near universal act of burning. As with so much in this volume—the soldiers who are Greeks, the islands that are ducks—these figures’ essences far outweigh their particulars. Longley’s work of remembrance is at its core a work of linking these essences to discover doubles and twins, and yet it knows even as it forges those connections that ghosts and images are not the things themselves. Nonetheless, the poems offer those echoes to be savored, as in the closing epigraph:

as though there are more swans

Longley teaches his readers in this volume to revel in the beauty of these echoes precisely because they are the only path to the swans that are not there. They are only echoes, but, thanks to these poems’ deftness and nuance, they are as good as the swans themselves.