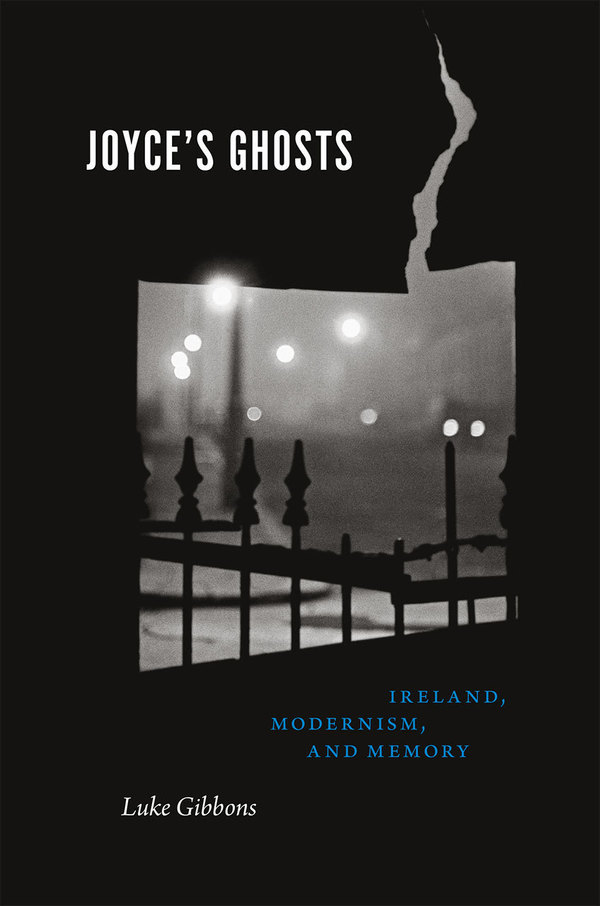 “What is a ghost?” asks Stephen Dedalus in the National Library episode of Ulysses, only to answer his own question: “One who has faded into impalpability through death, through absence, through change of manners.”[1] It’s a rueful and unthreatening definition implying a linear model of history: ghosts are those whose purchase on the world weakens as the present leaves them behind. It’s also woefully inadequate, spoken as it is by a young man visited by the all-too-palpable ghost of his dead mother and trying, by his own admission, to awaken from the nightmare of history. One project of Joyce’s book, we could say, is to expose the wishful narrowness of Stephen’s definition by providing an encyclopedia of haunting and disjointed time. In its pages we find pasts that refuse to fade or absent themselves and a present that fails in a range of ways to be self-identical. We find, too, traces of that most uncanny thing, a possible future that is fading into palpability through a slow, uncertain materialization.

With Joyce’s Ghosts: Ireland, Modernism, and Memory, Luke Gibbons establishes his place as the Joyce world’s head hauntologist—or really confirms that place, inasmuch as articles pertaining to the book have been making an impact on Irish studies and Joyce studies for a decade and more. As its title word “memory” suggests, Joyce’s Ghosts is centrally concerned with time’s psychical, cultural, and political dimensions, and particularly with how Joyce’s writings open their colonial metropolitan setting to “competing, unresolved temporalities, the experience of disjunctive or ‘allochronic’ time” (167). This chronopolitics of untimeliness challenges, in the book’s sixth chapter, not only Joseph Frank’s alignment of modernism with spatial form but also more recent historicist accounts of modernism’s fealty to global timekeeping regimes and technologies. With characteristic precision, Gibbons lays out the multiple, incongruous systems of public chronometry that operated in Ireland at the turn of the twentieth century and tracks their Joycean analogues in the glitchy, fissured spacetime of “Wandering Rocks,” Ulysses’ most clock- and map-reliant episode. He then takes us via “shell shock” and the use of flashbacks in early Irish cinema to a reading of allochronic time’s emancipatory energies—its capacity to reject the homogenizing timelines of colonial modernity and to summon possible futures left unimagined by them. It’s a tour-de-force analysis, one of many in Joyce’s Ghosts that build on the most generative existing scholarship by way of well-theorized syntheses and keenly observant readings of Joyce’s work.

In an absorbing discussion of John Huston’s 1987 film adaptation of “The Dead,” Gibbons describes Joyce’s story as “open[ing] up modernity to its own excluded voices” (136). These excluded voices—what John Edward Redmond called the skeletons at the feast of imperial sovereignty—are not, it’s crucial to note, survivors or revenants of the premodern.[2] They are modernity’s others, those whom the colonial world system constitutes itself by both excluding and exploiting. Their spectrality inheres, for Gibbons, in their liminality: like Michael Furey, the boy in the Galway gasworks who died of love for the young Gretta Conroy, they are at once required by modernity and denied its vaunted benefits. In opening modernity to these excluded voices, Joyce’s work does not grant them some favor of hospitality but asserts that by dint of their very relation to colonial modernity they walk through its walls. In doing so, they falsify a series of its most cherished dichotomies. Between the past and the present, to be sure. But just as importantly between the individual and the social, the psychical and the cultural—inside/outside barriers, news of whose permeability may be the most urgent that Joyce’s Ghosts comes bearing to its readers.

The book bears this news crucially in relation to literary technique, which Gibbons understands as a primary site of Joyce’s critique of colonial modernity. The common association of spectrality with individual psychic life would have prompted many critics to go ghost hunting in the passages of interior monologue for which Ulysses is famous. But because he is drawn to a spectrality of thresholds rather than of interiors, Gibbons focuses instead on free indirect discourse, a technique in which the conventions of first-person and third-person-omniscient narration mix like fresh and salt water in the transition zone of the Liffey estuary. And rather than follow other accounts of the technique as permitting a narrator to belittle characters in their own idioms, Gibbons takes free indirect discourse to model “the irreducible external component in inner life” (4)—the fact that the individual mind is not, pace Walter Pater, a space of solitary confinement but is constituted in ongoing relation to the social. Within the Irish context this means something different than it does for, say, Jane Austen. In a series of stunning readings of Maria Edgeworth, Charles Kickham, May Laffan, Emily Lawless, and George Moore, Gibbons illustrates how free indirect discourse emerges in nineteenth-century Irish literary practice as a politically charged interface between narrators using the King’s English and characters speaking in Irish English vernaculars, cultural idiolects that eventually cross over into “objective” narratorial zones. This alternative genealogy of free indirect discourse—and of interior monologue, which Moore used a few years before Édouard Dujardin—gives us a Joyce whose formal innovations were themselves produced in the literary transition zone between Ireland and the European mainland.

A different version of Joyce’s Ghosts might have amplified this point, or another of the book’s many claims, into a top-level argument and driven it home with prosecutorial singlemindedness. But Gibbons is myriadminded, and so fully in command of his materials that the book holds its abundant views without gripping. What’s more, Joyce’s Ghosts exhibits in its own methods what it asserts of its subject: that the individual is not a nutshell-sovereign but at most a fold in the social and therefore not a plausible ground for strongly territorialized or ontologizing claims. One result of this hauntological method is the argumentative modesty and multiplicity to which I’ve just referred. Another is the populous array of literary scholars, theorists, philosophers, anthropologists, and others whose voices inform, inflect, and even pluralize Gibbons’s discourse. Whether they speak to central or to digressive lines of investigation, the interlocutors here amount in their sheer range and number to a methodological commitment on the part of Joyce’s Ghosts. My own longer-than-usual list of follow-up readings quarried from the pages of Gibbons’s study includes Maurice Merleau-Ponty and Oliver Sacks on phantom limb syndrome; the German phenomenologist Max Scheler on uncanny facial resemblances; the Irish mathematician and educator Sophie Bryant’s 1913 study of “Celtic psychology and its manifestations,” The Genius of the Gael; and the Soviet cultural-historical psychologist Lev Vygotsky’s writings on the social origins and structures of interior mental life.

The most suggestive scholarly projects whet one’s appetite for the work they imply without undertaking—for analyses whose absence exerts a spectral pressure on the page. In the case of Joyce’s Ghosts, that perceptible but unmaterialized work would address the forms and energies in Joyce’s writing that walk through the walls of gender, sexuality, race, and species, as well as between beings and environments, the organic and inorganic. As that work is undertaken by other scholars—and indeed some of it is already under way—it’s hard to imagine they won’t lean hard on the example of Joyce’s Ghosts for its fluency, its compound of openness and seriousness, and its dialectical shuttling between archival findings, finely detailed literary analysis, and the broader prospects of history and theory. Above all his fellow Joyceans may look to Gibbons’s way of vexing and discrediting false dichotomies without acceding to equally false universalisms of language and location. For it is among the signal achievements of this book to have pinned the liminality of Joyce’s fiction to particular thresholds. As Derrida once put it—in a passage Gibbons himself quotes, and which might serve as a motto for Joyce’s Ghosts—“A phantom can thus be sensitive to idiom. . . . One does not address it in just any language. . . . Haunting implies places.”[3]