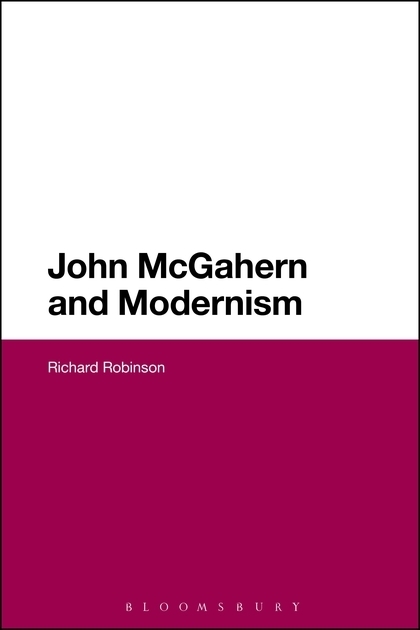 John McGahern and Modernism, Richard Robinson’s study of the modernist elements in the writing of John McGahern, is one of three studies of McGahern’s work to have been published in the last two years: Stanley van der Ziel’s John McGahern: The Imagination of Tradition and Frank Shovelin’s John McGahern’s Classical Style being the other two. Whereas Shovelin's and van der Ziel’s books employed a rigorously liberal humanist approach to analyzing McGahern’s literary styles and influences, Robinson uses theoretical methodologies that range from Hegelian philosophy to psychoanalytic criticism. Whether a critic’s response to this text is positive or negative (I suspect) will depend on their feelings with regard to the ideas being used in relation to McGahern’s fiction. This reviewer will freely admit his partiality to many theoretical approaches to literary analysis, and this is one reason why I found this book to be so engaging.

Ever since the publication of Denis Sampson’s seminal study, Outstaring Nature’s Eye: The Fiction of John McGahern, in the early 1990’s, the debt that the work of McGahern owes to European modernism has been taken as a given, and many critics (such as Declan Kiberd and van der Ziel) have followed Sampson’s lead in testifying to the “modernist McGahern.” Robinson’s study takes a greater interest in nailing down definitions of and engaging in debates concerning modernism and modernity more than earlier critics.

The book is organized into ten chapters that deal with either individual novels or short stories by McGahern. These literary works are analyzed via their relationship to modernist themes and tropes such as time, memory, psychoanalysis, and Nietzschean and Hegelian philosophy. This structure works well but it might have been even more rewarding to divide the chapters up thematically as opposed to textually.

Although Robinson is very quick to disabuse readers of the notion that McGahern is simply a writer of realist fiction, he also does not wish to characterize McGahern as a “modernist writer.” The intention of the book is, rather, to highlight the modernist influences that exist in McGahern’s literary oeuvre. Robinson invokes Derek Attridge’s assertion that being a “belated modernist” is antithetical to the modernist project (as defined by Ezra Pound) to “make it new” (10). The notion of McGahern as being a “belated modernist” is certainly one that Robinson wishes to defend the writer against.

Robinson highlights some of the stylistic features in McGahern’s work that make literary modernism somewhat difficult to discern upon first view:

Learning [in McGahern] is more often concealed than incorporated, and McGahern’s language is largely shorn of the specialized vocabulary and academicism. Pronouncements on aesthetics—be they in critical essays or in the mouths of characters—can sometimes have a deliberately homespun quality, particularly as they touch on deeply considered epistemological or metaphysical questions. (11)

This is particularly true of McGahern’s later writing, which is characterized by a clean and bare style that one would associate with the early works of James Joyce. This lack of explicit formal innovation or experimentation in McGahern’s texts proved a barrier (prior to Sampson’s work) to serious considerations of the complex engagement with European and Irish modernism within McGahern’s writing.

That McGahern could be regarded as an “Irish modernist” for whom local dialect and Irish rurality is championed as opposed to the cosmopolitan modernism that focuses on European and urban culture is an argument that Robinson champions. For this reason, I do find it a little odd that George Moore’s stories and his novel The Lake (the first stream of consciousness novel to be written in English) do not get a sustained analysis. Considering McGahern’s stated admiration for Moore, his inclusion would have added greater nuance to the distinction between mainstream modernism and Irish modernism.

Georg Hegel’s conception of dialectics is probably the most important strand of theory that Robinson uses, which is an important reminder of the continuing importance of Hegel’s work to literary studies. The analysis of “The Country Funeral” is the most Hegel-inspired section of the work in which Robinson argues that “McGahern is aware that the opposing of atavistic ethnic tradition and universal enlightenment reveals how mutually constitutive those ideological antipodes are” (229). The extensive analysis of this story is also most welcome, given the important place of this work in McGahern’s short fiction.

Robinson does an extremely thorough job in considering how McGahern’s fiction from Amongst Women onward stages a revolt against Joycean high modernism in favor of the more muted modernism of early Joyce and later Yeats. As Robinson argues: “McGahern may continue to appropriate the early Joycean naturalism of Dubliners, but this draws attention to how he refuses to follow that fictional method to its metamorphosis, somewhere within Ulysses, into the revolutionary poetics of Joycean high modernism” (143). Amongst Women, according to Robinson, is a text that embraces the early Joyce and fuses it with the symbolism of middle to late Yeatsian poetry. The Nietzschean dimension to his Amongst Women analysis is intriguing, but I think that more could have been made of the importance of Nietzsche to Yeats’s work because the poet is the most important literary influence referenced in this chapter, and the inclusion of Nietzsche needed to be slightly better justified.

As a Wildean academic, I found the consideration of McGahern’s partiality to Wilde’s form of modernism, which inspired Yeats. Robinson looks at Wilde’s aesthetic theories and essays and argues that they represent a proto-modernist manifesto: “For Wilde, art must be sterile—a trick played on nature, and illicit creation by man.” This informs Yeats’s notion that only in an eternal Byzantium, only when “out of nature,” can experience be safely sealed off from tyrannical teeming of the organic (119). Robinson put it very well when he asserts: “to take vice and virtue as the soiled materials for art was for McGahern a Wildean manoeuvre” (120).

Although Robinson does wish to focus solely on McGahern’s fiction, this reviewer does feel that a greater focus on McGahern’s famous article “The Image” would have added even greater credence to McGahern’s modernist credentials. In addition, it is somewhat odd that McGahern’s Memoir is not considered in this study given its current status as modern meditation on the genre of memoir. An engagement with that work might also have been an interesting angle in relation to McGahern’s debt to the writing of the great artist as memoirist, W.B. Yeats, whose influence on McGahern Robinson acknowledges.

Nonetheless, John McGahern and Modernism is a welcome addition to the ever-growing number of book length studies of the writer. Robinson’s methodology combines textual and theoretical analysis and does justice to both. The arguments are all interesting and—overall—very convincing. With the publication of this book, one hopes that a study of the post-modern elements in McGahern’s texts (both fiction and non-fiction) will not be far behind. Many other literary traditions have been given book length examinations in relation to McGahern’s writing, and a consideration of post-modern literature and theory would complete the McGahern picture.