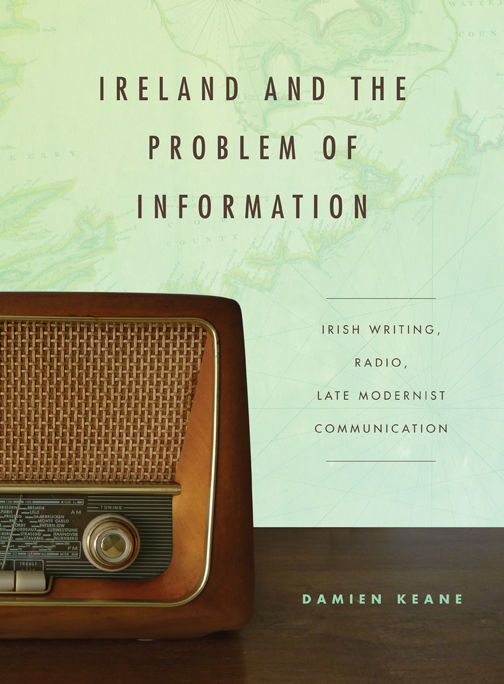 In Ireland and the Problem of Information, Damien Keane offers a salutary revision of late modernist, wartime, and transnational models of literary production. Although the focus of this book is Irish writing, W. B. Yeats, James Joyce, and Patrick Kavanagh make only cameo appearances. Instead of dwelling on canonical writers and their works, Keane concentrates on the movement of texts across national boundaries and languages. In this context, literature is understood as a series of ephemeral, material articulations within a field of cultural production. In one brilliant chapter, Keane traces English translations of Louis Aragon’s poem “Zone Libre” by Louis MacNeice and Patrick Browne in order to demonstrate that “the circulation of the poem articulates the pressures of wartime cultural mobilization as they were felt in Paris, London, and Dublin” (73). Aided and abetted by the radio, information at mid-century easily shaded into propaganda. Keane argues that “Irish national self-determination takes form only in relation to international, ‘worldly’ engagement” (6). In this regard, Ireland during the Second World War is an informational field crisscrossed by newspapers, poems, radio waves, memos, and books.

Some writers wittingly contributed to Irish nationalist causes by writing and diffusing propaganda. One such example was Francis Stuart, who traveled to Berlin in January 1940 to become a lecturer in English, American, and Irish literature at Berlin University. Stuart, already an established novelist in Ireland, made contact in Germany with Abwehr II, the Nazi military intelligence unit in charge of fomenting dissent “among discontented minorities and nationalist separatists in target countries,” such as the IRA in Ireland (111). Stuart initially wrote scripts for William Joyce, otherwise known as the radio traitor Lord Ha-Ha. Stuart subsequently broadcast propaganda of his own devising under the watchful guidance of Irland-Redaktion, a section of Goebbels’ Ministry of Propaganda. After the war, Stuart pretended that his broadcasts were strictly about literature and attracted a negligible audience. Through careful archival research, Keane proves beyond the shadow of a doubt that Stuart spoke mostly about politics during his on-air rants against capitalism; in his wartime broadcasts, transcribed by American listeners from shortwave interceptions, Stuart attacked the deleterious effects of Anglo-American liberalism and Franklin D. Roosevelt’s economic policies. By approaching Irish literature through Stuart, a controversial if minor writer, Keane demonstrates how Ireland understood its wartime situation and destiny as a small nation. Having thrown off the shackles of British imperialism, Ireland sought sympathizers and allies in Europe and around the world, regardless of their dubious political positions. Rather perversely, Francis Stuart understood the Third Reich as promoting freedom for oppressed people. (He appears not to have grasped the meaning behind the Nazi invasion of the Sudetenland, Poland, Holland, Denmark, Greece, and France.) In short, Stuart mistook his own freedom within Nazi Germany for the national destiny of Ireland.

Ireland and the Problem of Information is filled with pertinent, historical detail and careful analysis of speeches, poems, and broadcasts. Keane’s first case study concentrates on Eamon de Valera, the Italian invasion of Ethiopia in 1935, and a violin-playing oddball named Walter Starkie. Out of this brew, Keane confects a compelling and original reading of Irish internationalism, facilitated by de Valera’s speeches at the League of Nations and on the radio. When the League of Nations was unable to prevent or counter Italian aggression in Ethiopia, de Valera realized that Ireland could expect no protection from the League. He “began to formulate a policy of neutrality that was enshrined in the 1937 Constitution and strictly practiced during the Second World War” (32). For his part, Walter Starkie was a professor of Romance languages at Trinity College, a founding member of the Centre International d’Études sur le Fascisme in Lausanne, and an admirer of Benito Mussolini. Starkie’s book, The Waveless Plane (1938), justifies the fascist regime in Italy in part through Mussolini’s radiophonic charisma. Mussolini also happened to play the violin, which further endeared him to the susceptible Starkie. Drawing on sound studies and the recent explosion in modernist radio studies, Keane argues that national affiliations are created by sound as much as they are established by newspapers, legislation, or other traditional means.

The chapter that Keane devotes to Louis Aragon is extraordinary in its reach and implications for transnational studies of Irish literature. The first English translation of Aragon’s poem, “Zone Libre,” appeared in the August 1942 issue of Horizon, the literary journal edited by Cyril Connolly. The magazine tried to balance conflicting aesthetic dispositions induced by the war. Six months before the publication of Aragon’s translated poem, Horizon devoted an entire issue to writing from and politics in Ireland; Connolly’s editorial introduction to that issue explains Irish neutrality to an uncomprehending British public. As Keane notes, “the war provided an extreme background against which to reanimate lingering antagonisms over Ireland’s cultural disposition and its competing modes of worldly engagement and native renascence” (97). In the event, the censors in Ireland banned the Irish issue of Horizon, not because of Connolly’s editorial commentary but because of the sexual content of “Old Peasant,” a section from Patrick Kavanagh’s long poem, The Great Hunger. As part of the rich tapestry of connections that Keane weaves in this chapter, he refers to the trope of silence in resistance literature, General de Gaulle’s radio broadcasts from London, Raymond Mortimer’s liaison between the BBC and de Gaulle’s Free French Forces, and “Le Rime en 1940,” Aragon’s essay about the terms for politically engaged poetry in which he rejects the facile equation between free verse and freedom. Keane thus gives an immensely satisfying account of cultural transmission—satisfying because so learned and so far-reaching in its possible applications.

Throughout Ireland and the Problem of Information, Keane draws attention to the differences between transmissions heard on the radio and words read on the page. For instance, in a wartime pamphlet called A Trip through Headline Land, assembled by Shaemus O’Sheel, an American-born author of Irish heritage, newspaper headlines in varying sizes scream at the reader. Large and small texts jostle for position on the page without yielding clues to their relative importance or meaning. As Keane observes, a pedagogical intention lies behind these page layouts: “Each of these visual arrangements is meant to mimic the experience of seeing daily editions arranged at a newsstand. In the commentaries, O’Sheel teaches his reader to interpret the plates, arguing that a newspaper’s design—the size and placement of headlines; the number of words given to some stories versus others; the burying of reports that contradict headlines on anterior pages—shapes the news as much as reporting does” (59). In effect, layout converts words into information.

The transcript of a radio transmission differs in its informational lode from the transmission itself: the crackle, fade-outs, hesitations, missed introductions, volume, and silences register as frustrating aural phenomena for listeners, yet can appear as eloquent, modernist omissions on the typed page. Such is the case with a radio broadcast called “This Is Paris,” made from France on April 4, 1940 and transcribed by listeners at the Princeton Listening Center in New Jersey. Page layout establishes political predispositions, which George Bornstein calls “the politics of the page” (qtd., 110). The layout of Ireland and the Problem of Information mirrors the modernist preoccupation with information and its presentation. Each page has two columns; the right edges of columns are ragged rather than justified. Block quotations are set in sans serif type. The layout resembles a newspaper column or a modernist manifesto. In other words, the layout disrupts expectations about scholarly monographs; the layout intervenes in, and contributes pedagogical meaning to, the reading experience.

Each chapter of Ireland and the Problem of Information is meticulously researched. Every page is written with brio and wry humor. This book extends the boundaries of current studies in Irish literature by locating texts within a transnational, acoustic, and enhanced field of cultural production.