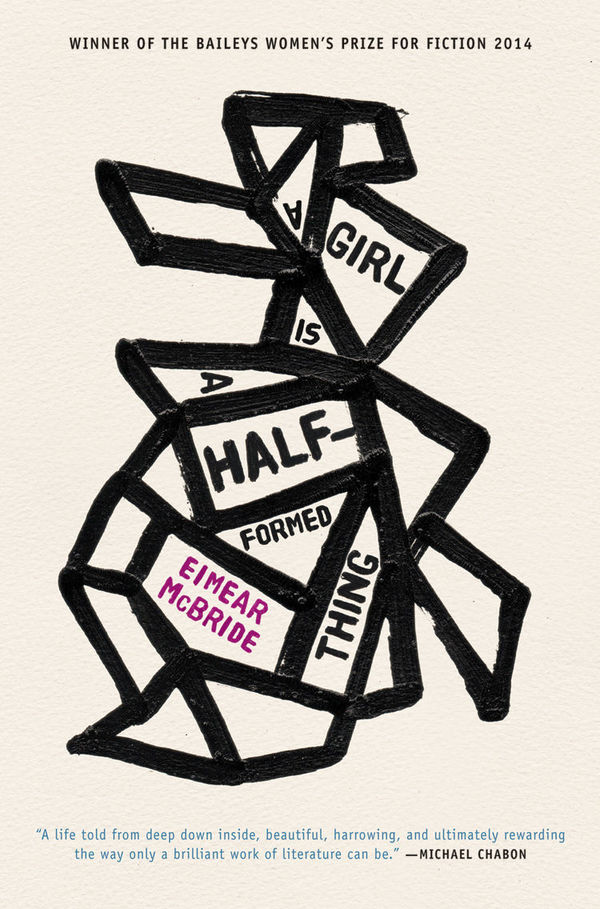 The US publication of A Girl Is a Half-Formed Thing, Eimear McBride's debut novel, arrives accompanied by fantastic tales and enormous buzz. Born in Liverpool in 1976, McBride spent her childhood in the west of Ireland before moving back to England at age seventeen to study acting. Her novel’s rocky road to publication is already legend. Written in six months and rejected by publishers for nine years, A Girl Is a Half-Formed Thing was eventually published by Galley Beggar Press in 2013. It subsequently attracted rabid praise, inspiring Anne Enright in The Guardian to label McBride “a genius” and the novel “an instant classic.”[1] It has gone on to win an array of prestigious literary awards, including the 2013 Goldsmiths Prize and the 2014 Baileys Women’s Prize for Fiction (the “rebranded” Orange Prize), whose short list included Donna Tartt’s The Goldfinch and Jhumpa Lahiri’s The Lowland. The US edition of the book, published by another small independent publisher, Coffee House Press, appears in September 2014.

Set primarily in rural Ireland during the recent past, A Girl Is a Half-Formed Thing is a coming-of-age tale told from the perspective of its unnamed female protagonist. The novel chronicles a life marked by persistent domestic trauma: the narrator’s older brother has a chronic brain tumor, her father has abandoned the family, her mother’s attention is commanded by fundamental Catholicism. Her distressing family situation begets in the protagonist a mixture of boldness and susceptibility that renders her vulnerable to her uncle, who seduces her when she is thirteen years old. Here, the word seduction—which may seem an odd one to describe what is, in fact, the rape of a minor—seems important because it captures the unsettling description of the protagonist’s sexual initiation. In this rape scene, through our direct access to this girl’s consciousness, we witness her complicated emotional and physical response to sexual abuse. She simultaneously desires and loathes her uncle, and she feels both shamed and exulted by the sex. This rape is represented as a rite of passage that at once constructively liberates and irreparably damages her, an act that helps to distance her from her mother and brother, even as it propels her into a toxic, life-long affair with her uncle. It also triggers an on-going pattern of abject and violent sexual encounters with other men, descriptions of which are interwoven in the novel among her accounts of personal experiences and family events that unfold as she grows older. 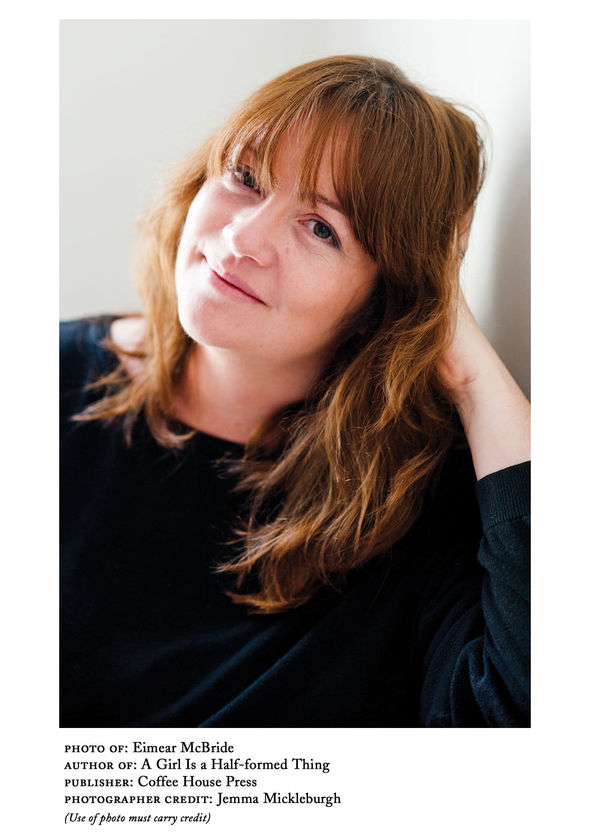 A Girl Is a Half-Formed Thing demands a great deal from readers, due both to its distressing subject matter and its formal difficulty. The novel overtly poaches aspects of its content and form from an array of modernist writers including Yeats and Beckett, and those well versed in Irish literature may also see resonance with the work of Kate O’Brien and especially Edna O’Brien. McBride pays knowing homage to James Joyce in particular. The style of A Girl Is a Half-Formed Thing echoes the opening of A Portrait of the Artist as a Young Man (1916). McBride’s first paragraph relates the defining circumstance of the protagonist’s early life, her brother’s tumor surgery and his resultant brain damage, beginning before her birth, while she is in her mother’s womb. The novel’s opening sentences introduce its disjunctive prose style: “For you. You’ll soon. You’ll give her name. In the stitches of her sin she’ll wear your say. Mammy me? Yes you. Bounce the bed, I’d say. I’d say that’s what you did. Then lay you down. They cut you round. Wait and hour and day” (3). But unlike Joyce’s experimental Bildungsroman, the narrative voice of A Girl Is Half-Formed Thing never changes or matures: the broken sentences, the snarled syntax, and repetitive phrases remain consistent throughout the entire novel.

In some ways, the novel’s content offers little that is new. McBride trots out almost every trope of modern and contemporary Irish literature: the rural poverty, the unhappy family, the sexual abuse, the oppressive Catholicism. However, A Girl Is a Half-Formed Thing does something fresh and important with these themes, thanks in part to its canny adoption of modernist form. It deploys modernist tactics in an innovative way, using them to convey a feeling of intimacy with the protagonist. In the novel, her needs and responses are primal and urgent, and the broken testimonial prose makes it seem as though her thoughts are less digested and less run through the mill of perception than the reflections of many characters found in works addressing similar themes. In particular, the novel is merciless and unrelenting in its exposure of this adolescent’s unmitigated interiority as she engages in increasingly violent and debased sexual acts. Throughout the novel, McBride refuses to rely on abstraction or insinuation to communicate the suffering of this young woman. She seeks, and delivers, potent immediacy in her prose. It’s as if Joyce had written a detailed report of the masturbation and ejaculation of “the queer old josser” in “An Encounter” (1914) or as if Mary Lavin had provided the particulars of Sarah’s erotic activities in her story “Sarah” in Tales from Bective Bridge (1942). In McBride’s rendering of sex and sexuality, we can also recognize a contemporary moment shaped by internet pornography, books like Fifty Shades of Grey, and television shows such as Game of Thrones. The book parries with contemporary history, mass culture, and modernist legacies both universal and particular to Ireland.

These moments of graphic sexuality in A Girl Is a Half-Formed Thing are only one element of interest in the novel, but they draw attention to what, in my opinion, is most important about this book. McBride cannily resurrects the legacy of modernism to condemn childhood sexual abuse and does so in part by drawing attention to the complexity of that abuse for victims. Her account of adolescent sexuality is astonishingly intricate. When the narrator is first raped by her uncle, we read the concrete, sensory details of that experience and share her fractured perspective of what unfolds. This same method is deployed in depictions of the alarming and appalling sexual encounters she subsequently has with schoolmates, her uncle, acquaintances, or strangers. The novel’s fragmented prose and crystalline detail help to produce a sense of intimacy with the narrator by inviting us into the eroticism and conflicted emotion typifying these encounters, even the most violent ones. We are asked in particular to understand the pleasure characterizing the protagonist’s exercise of subjection and submission, to recognize the knowledge she puts on—to paraphrase Yeats’s “Leda and the Swan” (1923), one time-honored modernist depiction of violent sexuality and its consequences.[2] The novel thus showcases the genuine complexity of sexual abuse as experienced by someone in her teens. It acknowledges the fact that sexual abuse can feel good physically or psychologically, that it is biologically if not psychologically or socially appropriate, that it is a perceived exercise of power, that such a transgression might allow for a meaningful and radical break from family, that it appears to give immediate access to the coveted world of adulthood, that the secrecy demanded by abuse becomes something that belongs to the victim and sutures him or her to the adult abuser, even as it enables more harmful abuse. The novel depicts the convoluted nature of sexual abuse, even as its distressing conclusion confirms that this abuse is fundamentally harmful and can have deadly consequences.

The shocking and lurid details accompanying the disturbing sexual encounters recounted throughout A Girl Is a Half-Formed Thing confirm that McBride is not seeking in this novel to perform modernist impersonality. However, by adeptly adopting and adapting so many elements of modernist form, she does offer a buffer for her readers. McBride’s use of modernism offers a prophylactic from intense absorption, keeping us at bay with its difficulty, its obfuscations, its knowing invocations of literary tradition. Strikingly, this tactic is in dialogue with her endeavor through graphic portrayals of all varieties of transgressive sex (among other unsettling moments in the protagonist’s life) to pull us into the narrative. We end up in what David James has described in his study of Toni Morrison’s fiction as an affective and participatory relationship between the reader and narrative solicited by language and form, one that provokes a “double consciousness of absorption and impersonality.”[3] Despite our fluency in the modernist Bildungsroman or the Joycean epiphany, and our ability to see how McBride deploys devices such as these in her novel, the modernist “armor” that she provides is not so impermeable that we cannot identify with the complexities of the abuse that she represents. As a result, the audacity of the sex scenes, and the dynamic relationship between form and content, make us particularly vulnerable readers. Strikingly, the very boundaries that her characters cannot identify or establish in their personal relationships, McBride provides her readers: she uses modernist form to remind us of our alienation and distance from her protagonist’s experiences, even as she mesmerizes us with vividly candid interior monologue. The armature of modernist intertextuality provides readers protection from identifying too closely with the protagonist’s abnegation. It thwarts our readerly empathy, engaging our intellects even as our emotions are pulled into the suffering of this young woman. By interjecting these overtly modernist formal maneuvers, McBride provides the reader, though not her character, the protections afforded by the literary, and by language.

This valuable knowledge imparted to the reader about abuse and suffering comes at a price. A Girl Is a Half-Formed Thing is a brutal read—an ideal test case for the logic of “trigger warnings,” those controversial alerts offered to students prior to embarking on a potentially disturbing text. The relentless darkness of the novel suggestively confirms McBride’s assertions that Russian literature, and her travels in Russia following the death of her brother, profoundly affected her as a writer. In the novel’s emotional tenor, readers will recognize the bleak naturalism of Tolstoy and Dostoevsky as they are asked repeatedly to identify with a protagonist who incessantly suffers, who is self-damaging and detrimentally promiscuous, and who deliberately courts danger and abjection. They might also recall the representation of adolescent sexuality found in Nabokov’s Lolita (1955), despite its very different narrator. McBride, who trained as an actor, has another antecedent for the complex emotional tenor of her novel in Paula Vogel’s drama How I Learned to Drive (1997), which depicts the affair between an adolescent girl named Li’l Bit and her Uncle Peck. Like McBride’s novel, Vogel’s Pulitzer-Prize-winning play offers audiences discomfiting revelations about the pleasures and perils of sexual abuse. How I Learned to Drive is a difficult play to watch, but its capacity to convey these complexities in performance bodes well for the forthcoming stage adaptation of A Girl Is a Half-Formed Thing that The Corn Exchange will premiere at the 2014 Dublin Theatre Festival.

The fervent enthusiasm with which critics and readers have greeted this novel suggests, I think, the crucial role that literature plays in helping us to understand more fully the complexities and consequences of sexual abuse, an act that is alarmingly commonplace yet regularly concealed and largely unfathomable to those exempt from its threat. The past few decades have demonstrated that harnessing experimental form to produce a formally challenging contemporary novel about childhood abuse in Ireland can summon glowing reviews and prestigious awards, as evidenced by works including Patrick McCabe’s The Butcher Boy (1992), Anne Enright’s The Gathering (2007), and Emma Donoghue’s Room (2010). A Girl Is a Half-Formed Thing might appear cynical in its adoption of a similar approach to related issues. However, McBride adroitly demonstrates the enduring power of modernist form to move readers, to literature’s capacity to trigger an emotional response that might usefully engender a heightened awareness of social conditions.

This review is drawn in part from Reynolds’s plenary address at the 2014 ACIS-CAIS annual conference. The full content will appear in the forthcoming collection, Modernist Afterlives in Irish Literature and Culture.

Correction: An earlier version of this article misidentified the first publisher of A Girl is a Half-Formed Thing. The novel was published by Galley Beggar Press, not Gallery Press.