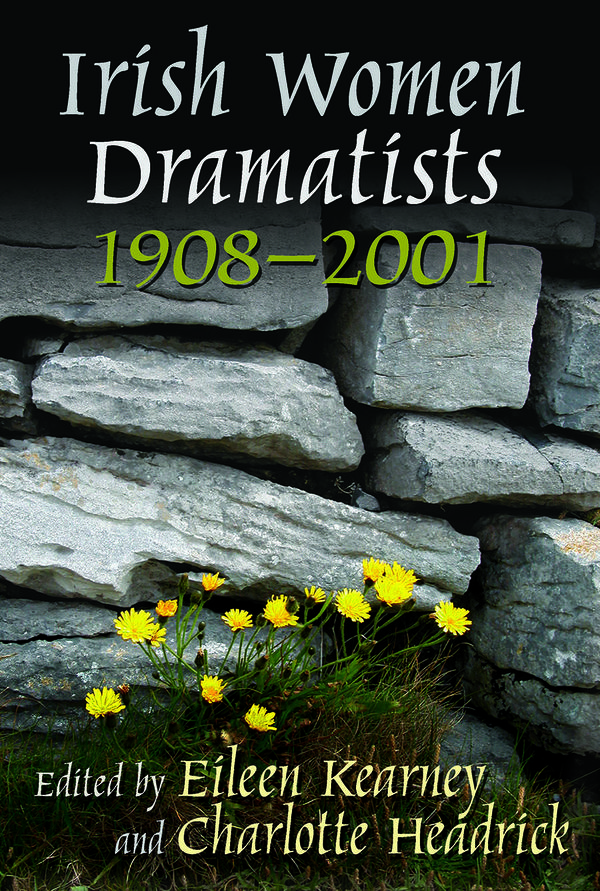 In their chapter, “Damned If You Do; Damned If You Don’t” in Performing Feminisms in Contemporary Ireland (Carysfort Press, 2013), Charlotte Headrick and John Countryman identify several factors impeding greater productions of plays by Irish women dramatists. Obstacles include single-authored work as privileged over collaborative or devised work; the favoring of male playwrights by producers and critics; an assumption that plays by women only address so-called women’s issues or interests; and, the rejection of plays that espouse feminist ideals. These obstacles, they argue, have stunted the development of women dramatists for the past century. In an effort to reinvigorate the larger discussion and dissemination of plays by Irish women, Headrick and Eileen Kearney have now published the first anthology of Irish women playwrights since Cathy Leeney’s 2001 Seen and Heard: Six New Plays by Irish Women.

Irish Women Dramatists, 1908-2001 includes a diverse range of women’s writing, demonstrating the breadth of sociopolitical issues that women have dramatized over the past century. Although Irish women have a strong tradition of writing poetry and fiction, Headrick and Kearney view playwriting as the most public, social, and collaborative form of expression. This is significant, they argue, in relation to the history of Irish women’s confinement to the domestic sphere, which is inherently private and individualistic. Thus, women who engage in playwriting are fundamentally rejecting calls for Irish women to remain quiet, private, and confined. In order to promote greater understanding of women’s contributions to the Irish theatrical canon, the editors selected seven excellent plays by significant playwrights.

The anthology begins with Lady Gregory’s The Workhouse Ward (1908). The play follows two disgruntled, misanthropic paupers who humorously and constantly bicker, ensuring their own downfall. The King of Spain’s Daughter (1935) demonstrates the development of Teresa Deevy’s writing by highlighting the play’s “flighty protagonist, Annie Kinsella, [as] the literary precursor of Deevy’s most well known character, Katie Roche” (42). Anne Le Marquand Hartigan, who is known primarily for her poetry, is included next. I Do Like to Be Beside the Seaside (1984) is set in an assisted living facility and addresses the complex issues of aging, independence, illness, romance, and death. This historical leap from plays of the 1930s to 1984 is not adequately explained, however, in the anthology’s introduction. This gap further demonstrates the need for a scholarly narrative about why and how women dramatists have been excluded from Irish theater history and what conditions prevented them from having a greater impact leading up to the 1980s.

The next play, Delores Walshe’s The Stranded Hours Between (1989), is set in South Africa during apartheid. A couple camping in Kruger National Park must confront their prejudices when they take in an injured refugee fleeing from the Mozambican Civil War. This play, which is published here for the first time, is ripe for scholarly analysis with clear influences from Brian Friel’s Translations (1980). Like Friel, Walshe uses the conceit of her characters speaking several different languages (English, Afrikaan, and Xhosa) while having all the dialogue performed in English. Similar themes about language, communication, translation and a colonizer’s subjugation of an oppressed people are rife throughout the play. The last three plays included in the volume were produced between 1992-2010. Patricia Burke Brogan’s seminal Eclipsed (1992) is set in the Magdalene Laundries; Jennifer Johnston’s monologue play Twinkletoes (1993) centers around an IRA prisoner’s wife; and, Nicola McCartney’s Heritage (2001) addresses the power of identity, tradition, mythology, and history to shape the lives of Irish emigrants.

The introduction to the anthology includes a broad strokes overview of the development of theater in Ireland stemming from the elite English-language theater of the ruling class during the 17th century. Kearney and Headrick are careful to distinguish this early theater in Ireland as fundamentally different from “Irish drama,” which was fully realized during the Irish Literary Revival of the late nineteenth and early twentieth centuries. They briefly mention that the first examples of women’s theatrical contributions were primarily associated with the nationalist women’s organization Inginidhe na hEireann and suffragette Alice Milligan’s nationalist drama and tableaux. Greater analysis of the impact of these early nationalist and feminist plays would have strengthened the introduction and given readers a better understanding of the complex historical development of women dramatists in Ireland. While the editors cite the importance of community theater in producing women dramatists in the early 1900s, they also present it as evidence that women have historically been (and continue to be) marginalized into amateur theater. They also identify an intriguing trend (deserving of greater research)—that many early women playwrights had extremely short-lived careers with only one or two plays professionally staged before they turned to other forms of writing (poetry/fiction). The editors list twenty-three dramatists who had a few plays produced in Ireland between 1902 to 1913, before retreating from playwriting altogether. Headrick and Kearney also identify distinctly different voices and perspectives in the early nationalist plays of male versus female playwrights. Male dramatists, they argue, focused on “action and fighting on a community or national level” while female playwrights focused on “the personal level, on the connections between those involved” (7).

Following a brief overview of the development of an indigenous Irish drama, Headrick and Kearney provide the sociopolitical context for the development of women playwrights. By severely limiting their engagement in education, politics, and employment during the first half of the twentieth century, the Irish government and the Catholic Church restricted women to the domestic sphere, emphasizing their roles as mothers and wives. Headrick and Kearney seem to suggest that because women were actively excluded from formal politics, they were, de facto, also excluded from professional theater (which is often viewed as an inherently political act). They speculate that many talented women dramatists were prevented from having long-term theatrical careers (and thus turned to more socially acceptable modes of writing) because of the strong male patriarchy that made it objectionable for women to participate in inherently public and political acts like the theater. The strongest aspect of the introduction is the list that Kearney and Headrick compile of dozens of women playwrights from the twentieth century whose plays and stories have yet to be fully recognized or analyzed. This listing of women dramatists is an important way of marking and publically recording women’s contributions, despite the lack of research, historiography, or analysis that has been done on their plays. It is now up to a new generation of Irish theater scholars to mine the puzzle pieces from decades of lost women playwrights to better understand exactly why and how women’s marginalization from Irish theater was so profound until the 1980s and what challenges stubbornly remain that continue to restrict the flourishing of more women dramatists today.

Another strength of the volume is that Kearney and Headrick are careful to include the often-overlooked influence and success of Northern women dramatists. The editors acknowledge not only the contributions of well-known playwrights Marie Jones, Christina Reid, and Anne Devlin but also the influence of women-led theater companies such as Charabanc and Big Telly and of newer dramatists such as Abbie Spallen, Morna Reagan, Lisa McGee, Lucy Caldwell, and others. Indeed, two of the seven plays included in the anthology are from Northern-based playwrights Jennifer Johnston and Nicola McCartney. Although Northern women’s contributions are routinely marginalized within Irish theater scholarship, Kearney and Headrick are careful to acknowledge that Northern women dramatists and practitioners have constituted a significant portion of women’s success in Irish theater since the 1980s.

Kearney and Headrick firmly believe that “women see and experience the world differently than men do, so they write about it differently” (24). Highlighting women’s writing in this anthology is a way of celebrating and acknowledging those differences while also hopefully raising the profile of Irish women dramatists. Greater recognition of women playwrights will hopefully encourage more professional productions of their plays, greater scholarship and classroom discussion, and potentially encourage more women to write. However, concern about ghettoizing women’s work into a separate or lesser category of “women’s drama” has arguably prevented more Irish publications, festivals, and productions from focusing on women’s dramatic contributions. But, as Patrick Lonergan notes in his entry “There are no women playwrights?” from his blog Scenes from the Bigger Picture, the distinction must be drawn between “women’s drama” and “drama written by women.” The former category is often used for commercial/promotional purposes and associates this genre with “women’s interests” such as romance, child-rearing, and female friendships. The later category simply encompasses the wide range of diverse topics that women are dramatizing. Kearney and Headrick’s anthology falls firmly in the later category, taking time and care to demonstrate the breadth of form, subject matter, and theme that Irish women playwrights have addressed over the twentieth century. And, hopefully, the volume will also encourage a new generation of Irish drama scholars to dig in and uncover this lost but rich history of Irish women dramatists and practitioners.