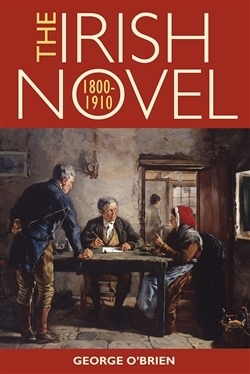 Any scholar or casual reader who is drawn too literally by this book’s title could very well be surprised upon reading it. The book is not an overview of novels coming out of Ireland in the nineteenth century, with various authors or works used to illustrate or support certain observations or positions.[1] Rather, O’Brien has put together an intriguing, chronological study that consists of considerations of one novel by thirty authors. Readers might be disconcerted further if they think of “Irish” novels as only those written by natives of Ireland who set their work in the Emerald Isle. O’Brien includes plenty of the usual suspects, including Castle Rackrent (1800) by Maria Edgeworth, Knocknagow (1873) by Charles Kickham, and The Real Charlotte by Somerville and Ross (1894). There are, however, several unusual suspects, not only relatively obscure writers but also writers who were not Irish, as well as books that were not about Ireland. Further, O’Brien has chosen novels by several well-known writers that are not among the best-known or most-acclaimed works by those writers.

In his Introduction, O’Brien explains his critical approach and therefore his strategic choice of novels. He states first that his choices and his discussions reflect the rise in interest in the novel in nineteenth-century Ireland that began to gather momentum among scholars at the end of the twentieth century (ix), a renewal he maintains that represents changes in the conception and critique of Irish literature (x). Moreover, he writes that the works he will consider were excluded from the “complexity of the Irish literary tradition” (xi), but that he finds it possible to construct an account of the novel in Ireland between 1800 and 1910 that is less disparate than the contents of the novels themselves (xiii).

This book is extremely well written, with each examination presenting first a biographical background of the author and then a cogent summary and critical analysis of the novel, in clear, jargon-free prose. Rather than restate his objectives from the introduction, O’Brien lets each novel stand for itself—although he uses the introduction to suggest points of “contact and contrast” between several “paired” works, Edgeworth’s Castle Rackrent and Lady Morgan’s The O’Briens and O’Flahertys (1827), John Banim’s The Boyne Water (1826) and Gerald Griffin’s The Collegians (1829), Canon Sheehan’s Luke Delmege (1901) and W.P. Ryan’s The Plough and the Cross (1910), for example (xiii-xiv).

The foregoing listing also gives something of a taste of O’Brien’s selection of usual and unusual suspects in the “canon” of Irish literature. While writers such as Edgeworth, Lady Morgan, Banim, Griffin, and Sheehan might be familiar to Irish literature enthusiasts, Ryan might not be as well-known (he was more often recognized as a journalist and critic), and the same can be said of John Gamble (Charlton; or, Scenes in the North of Ireland, A Tale, 1823), Harriet Martineau (Ireland: A Tale, 1832), Anna Maria Hall (The Whiteboy, 1845), William Allingham (the verse novel Laurence Bloomfield in Ireland, 1864), May Laffan Hartley (Hogan, M.P., 1876), Charlotte Riddell (A Struggle for Fame, 1883), or Rosa Mulholland (Marcella Grace, 1886). Of course, the lack of instant recognition associated with those authors or titles helps support O’Brien’s assertion that they were excluded from that complexity of the Irish literary tradition that he mentions.

What is far more attention-getting, however, is O’Brien’s inclusion of well-known authors who hold exalted positions in the British literary canon. This includes William Makepeace Thackeray and his novel The Memoirs of Barry Lyndon (1856), which is set only partially in Ireland. It also includes Anthony Trollope’s Castle Richmond (1860), a novel usually accepted more readily as “Irish,” not only because Trollope spent many years in Ireland (in a civil service job) but also because Castle Richmond was one of four well-respected novels by Trollope set there.

Also included is Bram Stoker’s Dracula (1897), which current-day scholars have gone through contortions to present as an Irish metaphor or allegory, possibly because of Stoker’s having been born in Dublin. That is a notion to which O’Brien gives only token consideration at the end of his analysis. Regardless, the analysis is a thought-provoking one, lucid and lively.

O’Brien makes much more of a claim to Irish connection for Charles Maturin’s Melmoth the Wanderer (1820), primarily because Maturin also was born in Dublin and the eponymous John Melmoth was born in Wicklow, but also because religious belief (including Catholicism) is treated seriously in the novel. In addition, O’Brien argues that the novel’s combination of sectarian critique and United Kingdom history is what makes Melmoth’s Irishness emerge, and he posits Ireland as “a confessional terrain whose seventeenth-century formation is still contested” (14).

More striking is the inclusion of two authors who were Irish-born but who found fame and canonical status on the larger stage of London: Oscar Wilde and George Bernard Shaw. Inclusion of the two titans is not as curious as the two works of theirs that O’Brien considers: Wilde’s The Picture of Dorian Gray (1891) and a novel by Shaw, An Unsocial Socialist (1887). Both writers made their names as playwrights, and to a lesser extent as essayists, but Wilde did enjoy more success as a novelist than Shaw did, and Dorian Gray, regarded by many as a classic, continues to be read. O’Brien offers a quick mention of Dorian Gray in relation to his overall thesis near the beginning of his analysis but otherwise makes no effort to stress the Irishness of Dorian Gray, which is set in England, other than another (very) brief mention at the end.

Inclusion of An Unsocial Socialist is somewhat more curious. It would be difficult to leave Shaw out of any consideration of literature in the English language, but O’Brien acknowledges that the theater was Shaw’s métier, and most of the plays that made Shaw famous were performed in the very late nineteenth and early twentieth centuries. It would not do to include a play in a book about novels, of course, so that O’Brien discusses Shaw’s last completed novel, characterizing it as possibly the first imaginative work in English to foreground the term socialist, and defending the book as yet another intellectually challenging and stimulating work by Shaw. Focusing on the discussion of socialism and socialists is probably a wise approach, because St. John Ervine, in Bernard Shaw: His Life, Work and Friends, calls An Unsocial Socialist “a work so futile and incoherent that the reader almost believes that (Shaw) was suffering severely from neurosis when he wrote it.”[2]

Another tack taken by O’Brien is including widely recognized writers but analyzing novels that are not their best or best known, thus by implication, providing additional support to his thesis of exclusion. Thomas Moore’s Memoirs of Captain Rock (1824) is discussed, even though Moore is better known as a poet and writer of nonfiction prose. O’Brien considers The House by the Churchyard (1863) by Joseph Sheridan LeFanu, even though Uncle Silas is considered LeFanu’s masterpiece. Luttrell of Arran (1865) by Charles Lever is included, possibly because O’Brien calls Lever’s best-known work, The Adventures of Harry Lorroquer, “less a novel than a skein of picaresque japes” (100). For George Moore, O’Brien includes A Mummer’s Wife (1885) instead of the more celebrated Esther Waters. It would not be accurate to characterize Lady Morgan’s The O’Briens and the O’Flahertys as obscure, although the first book most people associate with her is The Wild Irish Girl.

The other novels considered are William O’Brien’s When We Were Boys (1890), Shan Bullock’s Dan the Dollar (1905), and Catherine Cecil Thurston’s The Fly on the Wheel (1908). William O’Brien was best known as a journalist and lieutenant of Charles Stewart Parnell, and When We Were Boys was one of only two novels he wrote. Bullock is known as a litterateur, if not a major one. The author acknowledges that Thurston heretofore has received little or no critical attention; but again the analyses of these writers are clear and instructive.

By using his introduction to offer his thesis and giving critical consideration to each author and book, George O’Brien has taken a risky but ultimately successful approach. Letting the reader reflect on each novel as a separate entity ensures that, while the significance of nineteenth-century Irish literature informs the overall reception of O’Brien’s book, each of these novels will be viewed on its own merits. This approach provides for both refreshing insights on well-known works and illumination on novels that previously existed in literary shadows.

[1] It should be noted that Cork University Press published another book by George O’Brien, The Irish Novel 1960-2010, in 2013. That book is not included in this review.