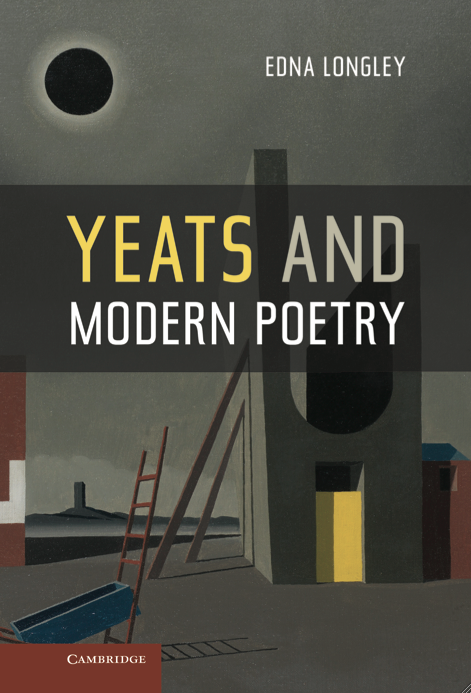 W.B. Yeats’s well-known pronouncement (in “Adam’s Curse”) that great labor—“stitching and unstitching”—should “seem a moment’s thought” came strongly to mind when examining Edna Longley’s Yeats and Modern Poetry.[1] This five-chapter study configures as a clear distillation and masterful synthesis of Longley’s long immersion in the two topics articulated in its title.

At first, the reader might search for a subtitle, and the lack of one perhaps speaks to the vital ambiguity of what constitutes modern poetry. Longley doesn’t answer that question so much as reveal the centrality of Yeats’s creative work, his critical opinions, and (more abstractly) his mere or pure presence to the poetic project that’s traceable from the “divergent paths” (70) of Symbolism and Imagism to such living practitioners as Paul Muldoon. In fine, this important book identifies and critiques Yeats in dialogue with others, whether during his lifetime or posthumously.

Longley claims that “it all comes down to poems” (xiii), and each of her chapters is fundamentally a thoroughgoing essay constructed around a close critical reading of a major Yeats poem: for example, “Lapis Lazuli”—“perhaps [his] most intensely reflexive poem” (66)—in the second chapter entitled “Yeats and American Modernism.” That said, the book also productively takes into account much of Yeats’s minor verse, plus a wide set of his autobiographical writings, essays, broadcasts, introductions, and, most usefully, his preface to the Oxford Book of Modern Verse 1892-1935.

While Longley engages with modernist poetry from America and both Great War and postbellum poetry from Britain (the “other island”)—and while she also examines Yeats’s notion, “the light of European literature”—her study opens with Yeats’s attempts to create and manage what he called an Irish “literary discussion” (11). Longley analytically reveals that in addition to the Abbey audience, Yeats addressed with considerable calculation such individuals as D.P. Moran, founder of the Leader, and Edward Dowden, literary scholar and Provost of Trinity College. In an especially illuminating section, Longley dissects Dowden’s oppositional “Oepidal presence” (14) amid Yeats’s efforts during the 1890s to defend Ireland’s “new creative impulse” as honoring technical rigor while eschewing rhetorical sentimentality.[2]

Longley convincingly establishes that an understanding of Yeats’s formative Irish apologetics is integral to the claim that “[m]ore than most poets…Yeats elides the hyphen in ‘poet-critic’” (xi). However, she also works with a concern of Samuel Beckett’s to insist that Irish critics mustn’t over-repatriate Yeats, mustn’t exploit his opus in an ideological “drive to throttle Irish literature into Ireland” (28). It’s useful, then, that her second chapter “considers how Yeats positions his poetry…vis à vis  [the] work” of the manifestly international T.S. Eliot and Ezra Pound (35). In prosecuting its arguments, the chapter frequently takes issue with established critics: Richard Sheppard, Ástráður Eysteinsson, and Hugh Kenner, to name but three. Rather than “swe[ep]” Yeats “into ill-fitting generalisations” about Modernism (35), Longley demonstrates that his concern—as poet and as critic—with the Metaphysicals’ poetry, with folk ballads, and with other traditions caused him to suggest purposes, subject matters, and forms for the modernizing of poetry often distinct from what Eliot promoted.

Longley can be forcefully clear, as in the statement, “A key distinction between Yeats and Eliot is that all Yeats’s mythologies, from fairies to gyres, invest poetry itself with ‘religious tradition’” (47). One rests assured, of course, that any Longley claim emerges not from an airy aphoristic impulse, but rather from meticulous readings of and detailed responses to poems. That fact duly noted, it’s nevertheless the case that her elixirated conclusions are often both arresting and useful. Consider, for instance, the pithy sentence: “If Yeats reads Eliot’s work as a denial of poetry, he reads [Pound’s] Cantos as a denial of form” (58). Central to Longley’s interrogation of Yeats in the era of Poundian free verse is the Irishman’s considered championing of such formal or wrought phenomena as “traditional metres” (67). Longley shows that Yeats espoused a formal “intricacy beyond anything in Pound” (65), doing so to optimally capture, preserve, and disseminate “what I alter”—that is, what he made new (67).

The third chapter posits Yeats as a bridge between the high modernist core and both the American Wallace Stevens, who “missed the ‘Waste Land’ tide” (70), and the Anglo-Welsh Edward Thomas, who “has often languished in the categories ‘Georgian poet’ and ‘War poet’” (69). Expanding the prior chapter’s emphasis on form, it presents a Symbolist reading of Yeats’s “The Two Trees” from 1892 as an entrée to discussion of how trees figure in Thomas’s “Aspens” (1916), as well as the tenth stanza of Stevens’s “Le Monocle de Mon Oncle” (1918). Using Yeats “[t]o link Thomas with Stevens” (104)—something of a new critical alignment—Longley charts all three poets’ movements across a Symbolist web traversed also by the Frenchman Mallarmé (whose “Un Coup de Dés” Stevens criticized) and the Belgian Maeterlinck (a critical biography of whom Thomas authored).

A major strength of Longley’s penultimate chapter, subtitled “Poetry and War, 1914-1923,” is its explanation that Yeats’s “roots in Romanticism and Symbolism” (106) help us appreciate his notions about how—and how much—poets should address conflict. Mindful of thoughts on war from Freidrich Nietzsche, Wilfred Owen, and others—and conscious of fighting in such theaters as Flanders fields and Dublin’s G.P.O—Yeats in his poetry pondered “why should war be necessary,” a question posed by the persona Owen Aherne in A Vision.[3] Respecting rebellion in Ireland, Longley’s ability to reveal new dimensions of “Easter, 1916” underscores why she remains an indispensible critic. But the chapter’s greatest achievement is its reading of the poems that constitute “Meditations in Time of Civil War” as “meditations on poetry itself” (125) in an age where “war almost [became] a rival mode [to poetry] of cognition or power” (128).

Longley holds that the Great War “recondition[ed] traditional verse-forms” (140), forms that are central to the book's final chapter on Yeats’s Ireland in relation to the other nations within the so-called British Isles. Of particular concern is the archipelagic career of the ballad, a genre Yeats privileged within modern poetic discourse, not least by selecting for the Oxford Book of Modern Verse what he deemed “folk-songs” from Joseph Campbell (the Lagan), A.E. Houseman (Shropshire), and others.[4] Longley highlights the “local rather than national" Irish feeling that Yeats identified in his fellow Irish Anglican William Allingham’s emigrant nostalgia for his native Ballyshannon.[5] She proceeds to argue that Yeats’s absorption of Allingham’s “emotion for…place” resurfaces in such later poets as MacNeice and Larkin. Importantly, attention to the successful emplacement of emotion in the poetic line becomes central to Longley’s subsequent, excellent discussion of Larkin as “the English poet of [his] generation who most deeply absorbed Yeats as form” (189).

Longley draws her study to a conclusion close to her home place by asserting (with a lower-case “n”) that “set[ting] Yeats in an archipelagic context” allows us to see that in the 1960s, three “northern Irish poets”—Heaney, Mahon, Michael Longley—returned Yeats to Ireland “in ways partly mediated by his impact elsewhere” (208). She then assesses how that Yeatsian presence resonated when the likes of Heaney became “elders” to “a second northern Irish ‘generation’” (210).

Enda Longley’s scholarship—thoroughgoing, not showy, suggestive, not didactic—makes the reader feel, “I’ve learned a lot.” Certainly, it’s a welcome experience when so much Yeats criticism seems (to quote a friend) the last redoubt of nitpicking empiricism. In terms simple yet wise, Longley speaks of Yeats’s “formal path from draughts to chess” (143), and as one engages with Yeats and Modern Poetry one realizes that its author’s mind, knowledge, and skills render her a “chess master” of literary-critical praxis. This book is the work of a great critic, and it’s an altogether fitting tribute to Michael Allen, the “great critic” to whom it’s dedicated.

[2] In “Professor Dowden and Irish Literature”—originally published in the 26 January 1895 issue of the Daily Express (Dublin)—Yeats asks whether Dowden “think[s] he has quite done his duty by this [Ireland’s] new creative impulse.”

[4] In his introduction to the Oxford Book of Modern Verse (New York: Oxford University Press, 1936), Yeats asserts that “[f]olk-song, unknown to the Victorians as their attempts to imitate it show, must, because never declamatory or eloquent, fill the scene. If anybody will turn these pages attending to poets born in the ’fifties, ’sixties, and ’seventies [of the nineteenth century], he will find how successful are their folk-songs and their imitations” (xiii).

[5] Writing to Katherine Tynan on 9 March 1889, Yeats hopes that his novel, John Sherman, captures a “West of Ireland feeling” that, in the tradition of Allingham's poetry of place, is “local rather than national” (Collected Letters, vol. 1, eds. John Kelly and Eric Domville [Oxford: Clarendon Press, 1986] 275). In an Allingham-focused review, “A Poet We Have Neglected,” published in United Ireland on 12 December 1891, Yeats revisits the phrase, holding that Allingham’s “feeling was local and not national” (Early Articles and Reviews, ed. John P. Frayne and Madeleine Marchaterre [New York: Scribner, 2004] 150).