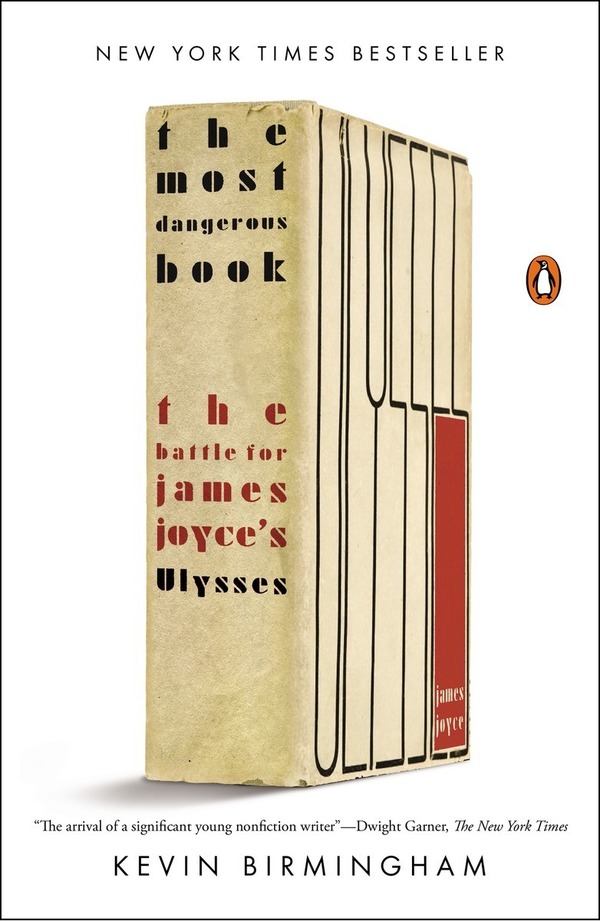 The Most Dangerous Book: The Battle for James Joyce’s Ulysses is a rewarding book that I recommend to all my friends, and, above all, to those who are not Joyce specialists. This is a book that both delights and instructs—or simply teaches a lesson. As reviewers have noted,[1] The Most Dangerous Book reads like a novel. It is the novel of a novel, one of the most famous novels in the world; a novel whose fictional adventures (the only serious “event” worth mentioning in Ulysses is Molly Bloom’s sexual romp with her lover, a sexually titillating situation indeed, but whose details are disclosed after the fact or else in lurid hallucinations) may be less thrilling than those of the very book presented in the context of its production and diffusion.

Here, the main plot is the story of how Ulysses survived censorship in the United States and in England, before being rehabilitated by enlightened judges and lawyers that managed to have it accepted as a “modern classic.” The villains are state censors intent on preserving their audience’s imagined virginity of mind. The subplot is the story of the author’s ailing body, his travails and obstinacy in spite of repeated eye operations, and the less and less deniable onset of his daughter’s psychosis. Together the body of the novel, deemed obscene and dangerous, and the body of the author, racked by diseases due to a sexual cause, follow a neat Moebius strip: the inside is the outside, and conversely. Here is a biography that turns into a true biblio-graphy.

Reading this book, I was reminded of the many times my father would tell me and my brothers the ordeal he had experienced with other schoolmates when, in October 1939, their ship was torpedoed by a German submarine in the Atlantic waters near Ireland. His narrative would wax dramatic, until one of us would invariably shriek: “Did you make it?” Here, I was tempted to ask the same question: did Ulysses make it, given all the odds against it? We forget this today when we buy the paperback freely in any bookstore; we have to be reminded that there was a time when the novel had to be smuggled across borders, bound with different covers, sewn in remunerated accomplices’ overcoats, with the risk of being seized and immediately destroyed. This book describes vividly the immense repressive system that enacted these seizures and destructions, all this in the name of decency and morality. Birmingham adds another chapter to Michel Foucault’s idea that society erects controlling apparatuses to which it grants immense powers until they become perverted parodies of the dominant system of values. The Pynchonian twist added by Birmingham is that the repressive apparatus was controlled by the American postal system. Like Oedipa Maas in The Crying of Lot 49, we discover a Trystero-like counter-network, with Samuel Roth as its unlikely ringleader, which provides the opportunity for an excellent cameo appearance of the master buccaneer of modernist times.

The best stories, beginning with the Iliad, are stories of injustice, in which justice triumphs in the end. Here is one, with a Homeric vengeance: how could such an obvious masterpiece of high literature, as Ulysses obviously was (and still is for any first or second reader), be confused with cheap pornography? In order to make us understand this curious predicament, Birmingham needed to reconstitute the atmosphere of paranoid suspicion that marked Britain and the US after WWI, and before that, the hangover from Victorian times with its typical mixture of prurience and repression.

The first hundred pages tell a familiar story and survey the years 1901-1917, from the Dublin background to exile in Trieste and finally Zurich, neatly called an “exile from exile” (95), the city in which the bulk of Ulysses was planned and written. Other characters appear, each attentively and skillfully delineated: Nora Barnacle, Ezra Pound, Margaret Anderson, Jane Heap, Harriett Weaver, Dora Marsden, John Quinn. The book comes into its own with part II, beginning with “Power and Postage,” a wonderful chapter describing the rise of the US Postal Services to which the task of Suppressing Vice was entrusted. All this sends us back to the infamous 1873 Comstock Act, an act that made its obsession to root out any “obscene, lewd, lascivious book, pamphlet, picture, paper, print or other publication of indecent character” (first quoted p. 5). In 1915, Comstock had been relayed by John Sumner, whose purgatorial zeal knew no bounds, and who extended his administration’s dragnet to include anarchists, feminists, and suffragists next to professional pornographers. The first source of power lay in the fact that the postal service had the right to increase postal rates whenever it pleased, and then of course to prey, confiscate, and then burn.

This history is followed by an exciting chapter on Virginia Woolf and Kate Mansfield, which allows us to gauge: if such enlightened artists, steeped in Freudianism and having experimented with bisexual entanglements and written about them, would be shocked by Joyce’s candid exploration of his main character’s psyches, of which sexuality was not the only component but in which it played a major role, how much more upset would a typical American burgher feel then? Birmingham goes as far as stating that there was no difference between Joyce’s erotic letters to Nora when he was alone and felt betrayed by her in 1909 and the readers of Ulysses: “James Joyce treated readers as if they were lovers” (143).

The story of The Little Review trial, with John Quinn as a well-meaning, irascible and ultimately impotent mediator and lawyer, has often been told; here, it is given new life with an amazing wealth of detail. When Ulysses was finally published thanks to the unstinting efforts of Sylvia Beach in Paris, it had been read in installments by many eager supporters, and was accompanied by a rumor of scandal from the start. Few cared in France, since it had been assembled by hand and printed in English by Maurice Darantiere’s uncomprehending master-printers in Dijon. Then began the tricky task of exporting the novel to countries in which English was the common language. Birmingham narrates an epic of smuggling and deceiving, until the confrontation was inevitable. Thus, in January 1923, when 500 copies of Ulysses were sent by cargo ship to Folkestone to be reassembled, the customs officials seized them and burned them in the “King’s Chimney”—and then they burned the records of the burning (253). Here is one the paradoxes of literary censorship presented repeatedly: censors did not read the novel, but just a few passages deemed obscene, and then they could not read them in public during their prosecutions because they would have offended the ears of any naïve listener often imagined to be a woman! What is shown in exquisite detail is that, as soon as a few enlightened judges, above all Judge Woolsey, were able to read the whole novel—which took them huge effort and endurance, they were convinced that the epithet of “dirty” did not apply to it, even if some passages were, and still are, by today’s common standards, “obscene.”

Two groups of positive figures emerge: enlightened lawyers like Morris Ernst, Judge Woolsey of course, and publishers like Bennett Cerf at Random House, who astutely calculated that a “modern classic” like Ulysses would give his new press the prestige it lacked. It would also prove to be a commercial success. The evil character, evoked with gusto and even sympathy in those pages, is Samuel Roth, a true pornographer but also a devoted admirer of Joyce’s work. He decided to pirate it to make money but also because he respected the author’s genius. He went to jail twice, was fined many times, and elicited the first international protest in 1927, that, paradoxically, sought to restore publication rights to a still banned book.

The chapter on “The United States of America v. one book called ‘Ulysses’” is perfect—it shows concretely how Ernst could bypass the legal jargon in vigor and present the novel as a “double stream of consciousness” (324), a point that he made by telling Judge Woolsey that while pleading for the book, he was also thinking of the judge’s tie, of the pleats in his gown, and the portraits behind (325). The judge, concluding that Joyce had shown the kaleidoscope of conscious and unconscious thoughts that make up our minds, decided to legalize the book in December 1933. Joyce and his friends had won, but ironically, the text of the first legal edition was the corrupted and pirated edition of Samuel Roth. The whole ordeal had enacted the transformation of American culture indeed; and the United Kingdom surrendered soon after. The book had become a modernist classic, which durably changed our perception of the world.

An interesting part of the book concerns the evolution of Joyce’s own body. Birmingham argues (some scholars had made that claim already, but never with a host of such compelling details) that Joyce’s recurrent eye problems derived from the syphilis that he had probably contracted from a prostitute in Dublin around 1901. Several letters all but confesses the real cause of this condition to Miss Weaver. Birmingham demonstrates that the wild array of treatments given to Joyce over time was consistent with the pharmacopeia currently used to treat syphilitic patients. This throws some light on Joyce’s worry that his medical ailment would have caused Lucia’s psychic troubles. She would have not only inherited his verbal genius but his corrupted blood, which brings us back to the world of Ibsen, with which Joyce had launched his career; there was a high price to pay for enlightenment, as confirmed by Osvald, the doomed hero of Ghosts, when he exclaims at the end: “The sun, the sun!”[2]

[1] For an excellent review written from the point of view of a Joyce specialist, see Michael Groden’s balanced but somewhat critical assessment in James Joyce Quarterly, 50.3 (2013), 843-848. He lists all the predecessors of Birmingham’s effort, and points out that one should not forget reading his endnotes.