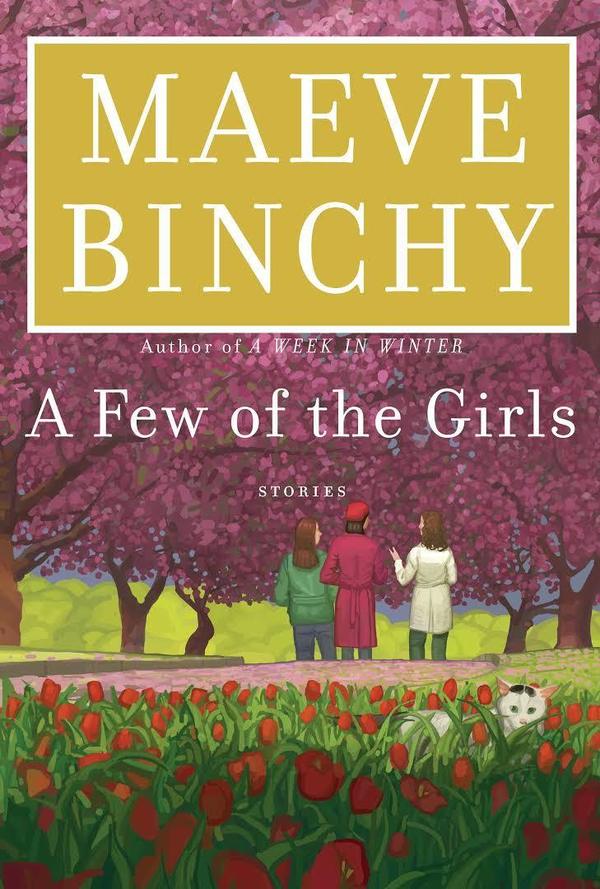 With her trademark understated humor, interesting female characters, conversational writing style, and ability to create suspense without depending on obvious plots, Maeve Binchy has long been a bestselling author whose novels and short stories have been translated into numerous languages. In addition, several of her fictional works have been filmed. Binchy became a fiction writer in middle age, after a successful career as an Irish Times journalist applauded for her wit.[i] A Few of the Girls is Binchy’s newest book of short stories, which were selected from those she wrote during several decades. As Binchy died at age 72 in 2012, her widower Gordon Snell provides a foreword to this collection. Compiled by Christine Green, Juliet Ewers, Carole Baron, and Pauline Proctor, the collection entertainingly focuses on topics for which Binchy is well-known, such as adultery, women’s friendships, marriage, divorce, women’s careers, travel, motherhood, and the changes in mores created by Ireland’s recent evolution into a European state.

Unlike Edna O’Brien, Binchy does not include sex scenes in her fiction. Nor did Binchy face the censorship in Ireland that O’Brien did for her graphic scenes and critique of Irish Catholic morality in The Country Girls and other early novels. However, both Binchy and O’Brien appeal to women readers in their most characteristic works. While “chick-lit” is a disparaging term that should be applied to neither writer’s works, the term, and the sexism underlying it, may help explain why Binchy’s literary awards are not the major ones. Or it may be that Binchy’s lack of the subtle symbolism, ambiguity, psychological depth, and stylistic experimentation seen in works by women who have won major awards—such as Binchy’s Booker-Prize winning friend Anne Enright—explains this phenomenon.

Binchy’s excellent “The Custardy Case” appears not only in her new collection, but also in Virgins and Hyacinths, a 1993 collection of short stories by many Irish women, including Enright.[ii] Like Henry James’s What Maisie Knew, “The Custardy Case” dramatizes a custody dispute from the point of view of a child whose parents are fighting over him. Innocently, the little boy tells the judge about his irritation with his mother and her relatives with whom he lives. The boy’s mild complaints result in the father becoming his custodial parent, even though he left the boy’s mother because she insisted on working outside the home. The father’s second wife has quit work to carry his baby and will now care for her stepson as well. The judge’s custody decision supports traditional gender roles, punishing the little boy’s mother for rebelling against them. As the little boy observes, “Mother’s eyes looked very strange, as if there was no light in them anymore” (193).

Another memorable story in Binchy’s new collection is “A Result.” The first-person narrator of the story is a mother who learns to imitate her own mother in befriending her twelve-year old daughter’s rebellious friend in hopes that her daughter will stop glamorizing her. Whereas the narrator’s mother had long ago succeeded in estranging the narrator from her childhood friend, the narrator ends up practically adopting her daughter’s unsuitable friend, while changing the girl in positive ways.

While masterfully written, “The Consultant Aunt” may help solve the mystery of why Binchy has not been given the serious consideration some other women writers have been given. The Machiavellian aunt in Binchy’s story resembles a villainess from the 1978-91 television melodrama, Dallas. While it is fun to read about such a well-drawn monstress, doing so may reinforce readers’ harsh stereotypes of women who are successful both in the boardroom and in the bedroom.

“Picnic at St. Paul’s” is also full of unexpected twists. Catherine is frustrated with an American acquaintance, Suzi, for repeatedly sending her friends, whom Catherine has never met, to visit Catherine in London. When Suzi sends her father to visit Catherine, the reader finally realizes that Catherine’s flaws exceed Suzi’s—for Suzi’s kindly father tries to help Catherine accept her mentally disabled sister, but Catherine is too rigid and proud to do that.

“The Sensible Celebration” depicts another kind of flawed female, a perfectionistic wife. Binchy gradually reveals that the character from whose point of view the story is told, Lorna, is a controlling wife and mother, and a highly critical, smug friend. “Sandra’s Suitcase” likewise appeals to readers’ negative stereotypes of some women, though in a more constructive way than does “The Sensible Celebration” or “The Consultant Aunt.” When shallow, well-dressed Sandra’s suitcase is lost by the airline on her way to Europe, Sandra must borrow frumpy clothes from her fellow travelers to wear during their long bus tour. From this trauma Sandra learns to be less preoccupied with her appearance and more deeply interested in people and art. “Sandra’s Suitcase” and “The Sensible Celebration” might give readers the impression that Binchy is a moralist.

While “Sandra’s Suitcase” may be faulted for its pat ending, “Decision Making at Christmas” provides an unusual take on the conventional portrayal of ex-mistresses. At age 50, Miss Mills has spent several decades having an affair with a married coworker, Edward, while helping him get promoted yet ignoring her own prospects for promotion. Now that their affair is over, Miss Mills does not become angry and bitter as readers might expect. Instead, she is grateful for the happiness she experienced during her brief times with Edward over the years and for her ability to help him develop his career. Miss Mills’s epiphany is to continue to regard her relationship with Edward as positively as she did while she was his mistress.

The title story for the collection, “A Few of the Girls,” appeals to readers’ voyeuristic desire to know how the rich live as well as to their desire to be reassured that the rich are no happier than are middle-class readers. Married to a rich man, Nicola comes to realize that she must leave him because he is unwilling to share her with any child they might have.

These sample stories from Binchy’s A Few of the Girls show the diversity of her subjects, characters, and plots, suggesting why she continues to be such a beloved, popular author inside and outside of Ireland. These stories also suggest why Binchy bears less rereading than her more critically acclaimed peers such as O’Brien and Enright.