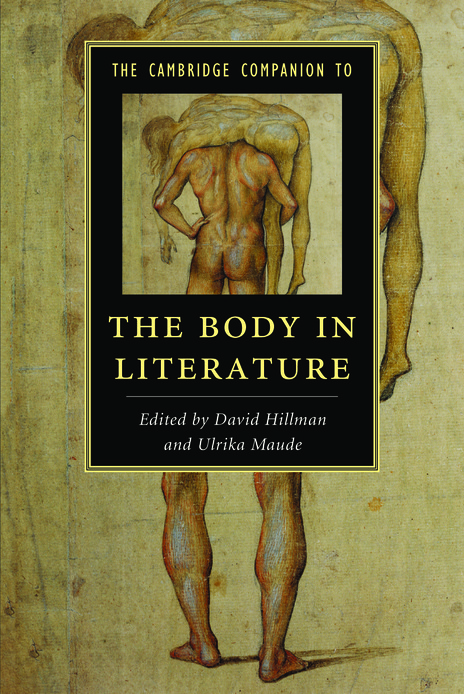 The Cambridge Companion to the Body in Literature is an “eclectic theoretical” (2) endeavor and it claims to provoke “the thought that there are deep kinships between literature and the body” (4). It seems that this is truly a companion that should not be missed, as it “analyses the ways in which medical, scientific, and technological advances have shaped our understanding of ourselves and addresses the manner in which literature reflects the shift in our experience. It combines historical, thematic, and theoretical perspectives on the body, from the middle ages to the twenty-first century” (2). The volume’s scope is broad and aims for a wide readership, students and scholars alike, who are interested in how literature has dealt with body images during different times and paradigms.

The introduction is excellent in its very comprehensive overview (and this is also the reason why I quote it extensively here), including a brief historical account of scholars who engaged with the literary representation of the body. These range from Michel Foucault and his discursive biopolitics to Hélène Cixous and Luce Irigaray, who questioned the phallocentric power in literature; from Frederic Jameson to Jean Baudrillard, who established postmodernist and poststructuralist viewpoints; from Marcel Mauss’s to Pierre Bourdieu’s sociological perspectives; and from Edmund Husserl’s to Maurice Merleau-Ponty’s and Jean-Paul Sartre’s phenomenological approaches (2). The introduction then lists the essays of the volume as “[c]ontemporary approaches to the body…ranging from medieval ideas of embodiment (Bill Burgwinkle) to posthuman bodies (Paul Sheehan)” (2-3). Topics such as “language (Andrew Bennett), sensory perception (Steven Connor), childbirth (Clare Hanson) and eating (Maud Ellmann)” are added “to the ways in which culture marks bodies, for instance through the invention of race (David Marriott) or normative ideas of sexuality (Heike Bauer) or disability (Jonathan Hsy) or body weight (Maud Ellmann)” (3). Further categories point to bodily experiences such as “pleasure, pain (Peter Fifield), ageing (Elizabeth Barry), the representation of death and dying (Sander Gilman), the place of affect (Jean-Michel Rabaté) and the non-representability of the traumatised body (Josh Cohen)” (3). Other essays cover “scientific and medical ideas” (Ulrika Maude), “early modern proto-scientific ideas” (David Hillman), and “culture and science” (Connor) (3). No major topic is missed, and this alone could be a remarkable achievement. The editors understand literature as “the place par excellence for the body to express itself,” and thus present a large variety of essays on the “many forms of literature [as] a kind of substitutability of words and flesh” (4).

It is noticeable, however, that all scholars, with the exception of Sheehan, who works at Macquarie University in Sydney, Australia, are from universities in the UK and the US, and mostly come from the field of English literature. Developments within other cultures and literatures are unfortunately not systematically covered in the companion: a task that, considering the wide scope of the volume topic, may simply be an impossible one. The introduction claims a wide scope of coverage for the Companion: “Responding to recent developments in the field, the volume investigates literature’s ability to represent embodied experience and assesses the contribution literary texts make to our understanding of the body” (2). The book title is, nevertheless, misleading in my eyes in terms of its breadth, unless Cambridge is understood as a synonym for narrowing the focus mainly to English language literatures and scholarship. If this is the case, then the volume is indeed a success in that it targets, in a highly qualitative and very informative fashion, students and instructors of English language literatures who are mainly interested in concepts of the Western body. The cleverly constructed table of contents must also be partly understood in this way when it covers topics such as “Eating, obesity and literature” (Ellmann), “The maternal body” (Hanson), and “Literature and neurology” (Maude). Adding subtitles to some chapters, such as for “Staging early modern embodiment [in the works of Shakespeare]” (Hillman), would have made the Companion’s somewhat hidden emphasis on Anglophone literature clearer, as references to other literatures and cultures are predominantly made for purposes of comparison.

Also practically absent from the sources provided in the Companion is any indication that major twentieth century theories of the body—including Judith Butler’s concept of a performative gender and Roland Barthes’s concept of the pleasure of the text—were strongly influenced by the significant contribution of the European avant-garde to our contemporary understanding of the body as fragmented. Yet there are some notable exceptions: Connor, in “Literature, technology and the senses,” cites Arthur Rimbaud for his conception of the “derangement” of the senses, and Cohen, in “Psychoanalytic bodies,” interprets Charles Baudelaire and Edgar Allan Poe through the lenses of Sigmund Freud and Walter Benjamin. Finally, throughout the volume, scholars of Irish literature can find multiple references to James Joyce, mainly to his Ulysses. Samuel Beckett’s work is also discussed, mostly in Barry’s “The ageing body.”

A few contributions, such as “Literary sexualities” by Bauer and “The body and language” by Bennett, include references to non-Anglo thinkers such as Jacques Derrida and Jean-Luc Nancy and thus do reach out to a wider readership interested in a variety of theories on the body. But Mauss, Bourdieu, Cixous, and Irigaray are only mentioned in the introduction, and not elsewhere, thus making the reader wonder whether a phenomenological, mostly based on Merleau-Ponty, or even “historico-materialist” approach, as mentioned in the introduction (3), could have been an editorial focus of the selection of theories and essays, thus possibly marginalizing some other important and more gender-oriented, sociological, and transnational aspects.

One of the best chapters covering a broader literary context comes from the expert in body and literature, Sander Gilman. His “Representing dead and dying bodies” focuses on the Victorian period and its impact on modernist writers. It considers Charlotte and Emily Brontë, Charles Dickens, Rainer Maria Rilke, and Franz Kafka, among a much wider spectrum of European authors and sources, who follow either the Judeo-Christian or Hellenistic tradition of bodily representation. Given the compendium’s focus on more canonical rather than experimental works of literature, it is understandable that Gottfried Benn’s Morgue, representing the shocking and morbid side of German Expressionism and modernism, or Edgar Lee Masters’s Spoon River Anthology or B.S. Johnson’s House Mother Normal: A Geriatric Comedy, representing more cynical and innovative approaches to the dead and dying body in modernist American and English literatures, are mentioned neither here nor in Barry’s essay.

The excellent contribution by Rabaté traces Gilles Deleuze’s and Felix Guattari’s sources in English language literatures in his essay on “The body and affect” while also referencing Marcel Proust and Kafka. Here, the reader learns that authors can invent affects in literature and thus “bring about the dissolutions of the limits between self and world” (242). This, however, also points to one of the main problems when discussing the body in literature. The concept of the body is an anthropocentric idea, and would deserve a more critical theoretical perspective, including one that questions the concept of human as a letter-centric and textual being, at least within the Western Judeo-Christian understanding of the world as text. There, the human body is seen as a clone of a divine image, and thus again as a textual (re)presentation of logocentric categories. The last chapter on “Posthuman bodies” by Sheehan seeks to address this dilemma by discussing Katherine Hayles and Donna Haraway’s “emphasis on embodied materiality” (252). But again, his capably-presented categories of a cloned body, a cannibal body, and a zombie body are limited to examples of the posthuman body in English language literatures.

Although my own cultural and theoretical background approaches the subject matter of body and text from a completely different perspective than that in the editors' selection of essays, I thought that reading The Cambridge Companion to the Body in Literature would provide another important resource for my teaching and research. As Associate Professor in the Department of Central, Eastern, and Northern European Studies, I have taught graduate courses in comparative literature and Germanic Studies on topics such as the “Body in Literature.” I have also done research and published on artists who have presented the human body as a montage and collage, such as the Berlin Dadaist Hannah Höch, the Viennese actionist VALIE EXPORT, the Australian performance artist Stelarc, and the feminist French body artist ORLAN. They all have either problematized the gendering of the body or have undergone significant body alterations. My interest in the representation of the body in literature thus lies in a textual understanding of the human body, historical and current, which has influenced artistic work, as well as the aesthetic image of the human body in the sciences, in particular in the field of tissue-engineered art. Our understanding of the human body as malleable and alterable has, in turn, also impacted the literary representation of the human body, in genres such as science fiction and especially in transcultural literature, as exemplified in the works of the Japanese-German avant-garde writer Yōko Tawada. Last but not least, German language scholarship, beginning with Walter Benjamin and Helmuth Plessner, and extending especially into the fields of historical anthropology, cultural studies, and performance studies, as represented by Claudia Benthien, Erika Fischer-Lichte, Dietmar Kamper, and Christoph Wulf, to name but a few, has produced a bulk of theoretical work on the human body and its representation that has had a profound impact on our understanding of the body in literature, and even of a collective body in politics. Some of this scholarship has been accessible in English since the nineties.

All in all, the Companion, while certainly having the quality of living up to its name within the fields of English language literatures and comparative literature studies, in my eyes neither meets its promise of taking up on recent developments in the much wider field of studies on the body in literature, nor does it cover the breadth of theories mentioned in the introduction for all accounts adequately. This review might be considered biased for the aforementioned reasons, but one could also consider that for the very same reasons, framing the body in literature must necessarily be predisposed by a certain set of cultural and theoretical values. Thinking about the body and literature always depends on what is understood by the concept of the human body and whether we assume it to be universal, or subscribe universal categories to it, as might be the danger of any phenomenological and materialist approaches. Therefore, some readers, including myself, will still have to wait for a companion to the human body in literatures outside of the here-presented Western body of scholarship, and that mostly of English language literatures. Perhaps world literature could then, conversely, and by following Deleuze and Guattari’s concept of a rhyzomatic network of knowledge as well as their adaptation of Antonin Artaud’s theater of cruelty (which tried to reach beyond the surface of the Western body), be regarded as a body without organs. Thus, it would be only logical that Artaud does not have a voice here, and that world literature is still in the search for a prominent organ. And how, one might consequently ask, could scholarly writing about the body in literature affect us then differently, and even physically, if it were acephalic and antiphallic?