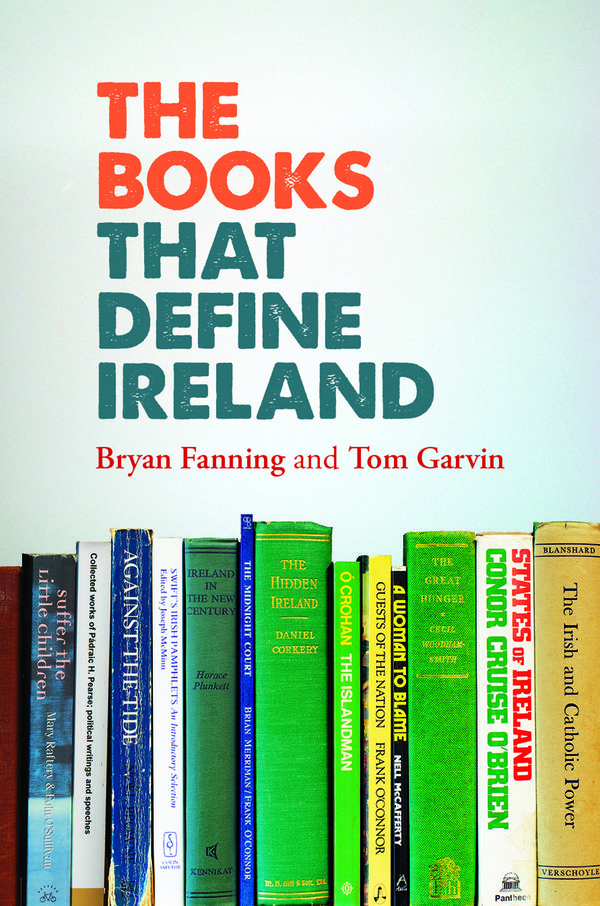 Bryan Fanning’s and Tom Garvin’s The Books that Define Ireland comprises 29 short essays from the two authors which seek to identify the books that over three centuries have tried to answer crucial questions about a country that has repeatedly provoked arguments about its national identity. As Fanning and Garvin state it in their introduction, their book is a kind of experiment in which each of them “trawled through the historical and social literature of the island of the last three centuries to come up with books which seemed to have had an impact on Irish opinion, have defined or best exemplified long-running debates, or have been under-appreciated in terms of their significance” (2). Part of the enjoyment their book affords is to discover what books have been hauled into the capacious nets cast by our assiduous fishermen who tell us that in all, fifty books are touched on or discussed at some length.

Their method in most of the chapters is to identify a key text by a particular author while sometimes adverting to other works by that author and to associated works by other writers. As self-declared “historically-minded social scientists,” their haul of books does not include much imaginative literature. This means that some big fish do not find their way into the net. Joyce’s Ulysses gets two brief mentions and is absent from the index. Jonathan Swift is present here by reason of A Modest Proposal, while Gulliver’s Travels receives only passing mention. There are surprises as some works get attention that in comparison to those texts might look like sprats to the undiscerning eye. For example, Chapter 5 (contributed by Bryan Fanning) deals with Andrew Dunleavy’s, The Catechism of Christian Doctrine (1742). Chapter 18 (again by Fanning) has as its subject James Kavanagh’s Manual of Social Ethics (1954). This focus on two books that are intent on supplying a firm foundation for Ireland as a Catholic nation are by no means anomalous in the context this book establishes from the outset. The Introduction refers to the first work to be considered, Geoffrey Keating’s, Foras Feasa ar Eirinn/The History of Ireland, which asked the question “as to whether Protestants had any place at all in the Irish nation” (1). In Chapter 1, Bryan Fanning presents Keating’s book as “a claim for the essentially authentic  character of a Catholic Irish nation” (10). Duleavy’s and Kavanagh’s works are significant in as much as they seek to sustain the exclusively Catholic nation as envisaged by Keating. These two works can accordingly be seen as consolidating the Catholic Church as a power in the land. The role of  the Catholic Church as force in Irish society is revisited in a later chapter in this book, which conducts a kind of debate about Irish identity across the centuries. Chapter 19 (also by Fanning) concerns itself with Paul Blanshard’s contentious The Irish and Catholic Power: An American Interpretation (1954). Fanning summarizes Blanshard’s damning judgement on the Irish polity as follows: “while political democracy in Ireland was genuine, an unofficial Church-State alliance permitted ecclesiastical dictatorship and political democracy to live side by side without any sense of incongruity” (165). This essay concludes by reporting how Blanshard thought that Church dominance had induced a “moral immaturity” in Irish society. Blanshard’s account of Irish “moral childhood” “anticipated arguments that subsequently came to the fore in efforts to understand clerical sexual abuse” (171). The issues of Catholic authoritarianism and clerical sexual abuse surface again in this book when the authors identify works by two novelists that can be said to help define modern Ireland: Edna O’Brien’s The Country Girls (1960) and John McGahern’s The Dark (1965), considered in Chapter 21. Chapter 29 focuses on Suffer the Little Children: The Inside Story of Ireland’s Industrial Schools (1990) by Mary Raftery and Eoin O”Sullivan, a book which that substantiates Blanshard’s insight.

A key feature of the method employed by Garvin and Fanning in this book is that they are not content with merely describing and contextualizing their chosen books; in many instances, they try to identify the long-term influence of the works selected for analysis. To this reader, it is striking how many of the texts studied in this book can be seen to contribute to the ideology of republican nationalist separatism. For example, we are told of Keating’s The History of Ireland: “much of the pseudo-history of traditionalist outfits like the IRA is directly or indirectly inspired by Geoffrey Keating” (19). Of John Mitchel’s Jail Journal (1861), we are instructed that its author “has had considerable and often under-appreciated influence on the revolutionary nationalism of early twentieth-century Ireland” (65). Later in the book, Garvin tells us apropos of Cecil Woodham-Smith’s, The Great Hunger (1962): “the entire IRA tradition feeds off enduring memories of British indifference to the suffering of their putative ancestors, and many an atrocity has been justified by reference to ‘Black’ ‘47’” (194). Given how various texts chosen for study in this book bear on republican and nationalist ideology, an important essay is that by Garvin on Conor Cruise O’Brien’s States of Ireland (1972), in which Garvin reckons, despite the intense controversy it provoked when published, it helped to pave the way for the Good Friday Agreement of 1998.

The Books That Define Ireland would make an excellent set text in a post-graduate course in Irish Studies since it would alert students to many important texts, and it constantly raises interesting questions for seminar discussion. One such question the book as a whole prompted me to ask is why there have been so few works of theological or philosophic reflection by Irish authors to represent in such a book? D.P. Moran’s The Philosophy of Irish Ireland (1905, a surprising omission) is scarcely, despite its title, a work of philosophy. Nor is George Berkeley’s The Querist (1735/7) a philosophic treatise, but a work of political economy concerned as it is by the problem of Irish poverty; it should surely have found a place in this book. In a book that refers frequently to the significance of Catholic and Protestant Christianity in Ireland, John Toland’s rationalist Christianity Not Mysterious (1696), copies of which were burned by the public hangman in College Green in Dublin, surely deserved an essay.

The great majority of the authors whose works were selected for analysis by Garvin and Fanning in this stimulating often witty book (I especially welcomed Garvin’s pithy observation that “best practice” is a term Pearse “would have despised”) were or are Irish (97). This limiting decision means that some highly relevant texts by non-Irish writers are ignored. One thinks of Edmund Spenser’s, A View of the Present State of  Ireland (1596) and of Thackeray’s The Irish Sketch Book (1842). In the twentieth-century, an essay on Australian poet Vincent Buckley’s Memory Ireland: Insights into the contemporary Irish Condition (1985), with its powerful reflection on how the Long Kesh hunger strikes by republican prisoners in Northern Ireland affected opinion and feeling in the Republic, could have been a valuable addition to this excellent book.