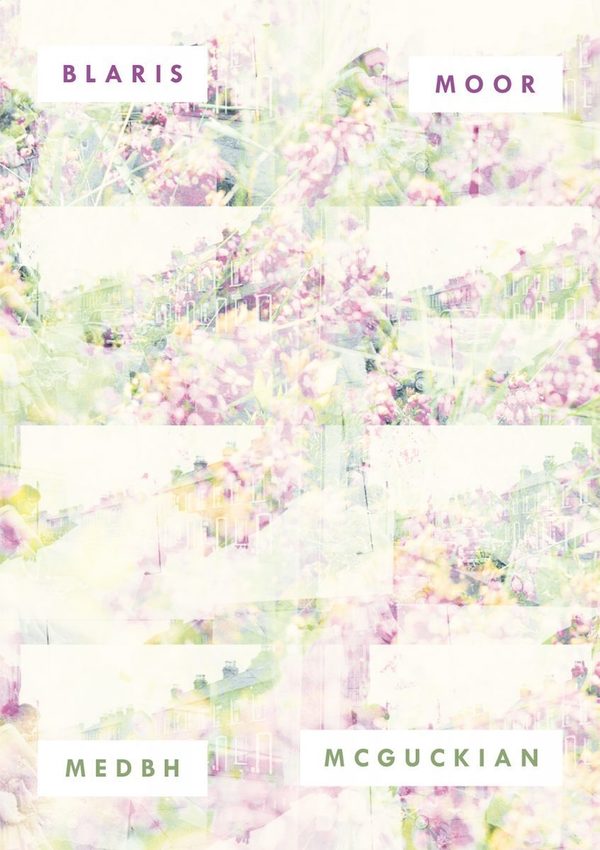 Medbh McGuckian is perhaps Ireland’s greatest living poet. She is certainly one of the most prolific. Her latest collection of poetry, Blaris Moor, takes as its title the traditional Irish ballad commemorating the 1797 trial and execution of four young militiamen condemned for connection with the United Irishmen. McGuckian’s collection begins with an explanatory note on the ballad taken from P. W. Joyce’s 1909 Old Folk Music and Songs. It is clear from her title and the use of this note that McGuckian wants the reader to begin her collection with a spirit of commemoration and sacrifice, keeping in mind the violent deaths suggested in Joyce’s abrupt description of the execution of the four young militiamen.

But McGuckian’s work is always much more than surface appearances present. This is not a volume of Irish verse referencing the glorious sacrifices of past rebellions, nor is it a simple catalogue of various conflicts (the Flight of the Earls, the two World Wars). It is instead a series of meditations on life, love, loss, and the violence we enact upon each other.

Throughout the collection images and words repeat (the moon, shadows, ghosts, photographs, poverty). Meanings are lost or changed utterly as they metamorphose between stanzas or between different poems. Beauty and stillness emerge and then dissipate in the midst of anxious phrases and brutal consonants of violence. Throughout all is the hand of a master poet.

McGuckian’s work acts as a sort of historical call and response, employing meta-textual references, cut-ups, and cyclical imagery. Known for her use of found text, McGuckian stitches and reworks words from others’ memoirs, essays, and poetry (Auden and Beckett are but two sources). This reworking is essential to her creative process and is but a part of what gives her poems such resonances of both past historical and a vibrant (albeit often bloody) present. This process seems to be described in lines from “The Stone-Word”:

Useless in the shadows of the sheds, I invented

a small abandoned notebook of doubts

concerning words, held it between my two fingers. (4)

And in “The Reading Fever,”

The intellect performs a full resolution

as though to a light by which

it went on being touched (2)

And in “Attempt at a Room” she appears self-mocking,

writing the poem about England for the newspapers.

Throughout the poems in this collection, imagery shifts from benevolent to malevolent as in a moon that is both a “moorlike beauty… / that served in the autumn as a lamp / …the one living / deserving thing” in “Musk” (6-7), the only thing “fully alive” in “Virginia Will Become Aughanure” (25), but also “a moonlight that scalds / the shell-pocked Holiday Inn” in “Trans-Shipment Station” (5). Objects appear as mementos and expressions of a dire need to remember as in the photograph that is both somehow “more naked” and resonant with destruction as “the first wartime colour photograph” in “The Nymph Hay” (3) and in “Musk,” a descriptive of the desire between lovers “urgent as a photograph” (7).

History rears up repeatedly in these poems. In “The Rainbow Division,” carts “toil across Kodja Chai bridge” pulling ammunition boxes and “It is not lack of rifles that worries / General Liman von Sanders / as he rides along the trenches” (17-18). A wrecked submarine, a French destroyer, and a “turbanned chaplain gazes” on “the plains of Troy and the hills / of Ilium, where Argive Helen / saw the brass-clad Greeks arrive” (18-19). The poem continues with scenes from the horror of Gallipoli, not only as a specific place and time but also as a war that echoes all wars past and future, and finishes with a shift to a matter-of-fact account of the loss of one family: “mourning cards were sent, lamenting all five sons” (20).

This linking of history’s tragedies appears again in “The Migration of the Nobles, 1603,” which commences, “Alas, the heart that devised” (22), echoing Shakespeare, Chaucer, and the Proverbs, but also introducing a rhythm that turns the poem into a ballad to the Irish nobility lost with the Flight of the Earls. The poem references O’Neill, but these nobles also see “the trenches / at the river Somme / taken by three Irish companies” (23). For McGuckian, it is important that we see the repetition of loss; it is not just one tragedy individual in time but a cycle repeating over and over wherein the Nine Years’ War in Ulster (ended 1603) becomes the Battle of the Somme. But war is also banal: “dim-remembered” in “Primrose Red Orchestra” (26) and a regular occurrence in which bullet casings are compared to “flowers, spent” in “The Statement of My Right Honourable Friend” (33).

There are individual moments in these poems that call for pause, for reflection. In “Lyre of Lyres” (49), a short poem grouped under a series entitled, “Verses Unpublished in the Poet’s Lifetime,” there is one such time-stilling moment: “But nor did I pour away / the ink with which I wrote of famine” (49). Because McGuckian writes of so many disparate things, we are brought up short when she abruptly signals the deeper, darker elements of her work: the horror of the trenches of WWI, the brutality of poverty, and the seemingly endless history of violence (famine, war, revolution, and so on).

Despite what other reviewers may suggest, McGuckian is not simply focused on war and loss. Some of her poems have warm, shining, and even funny moments as in the repetitions of animal names in “Animals of the Mind” that become more humorous as the poem goes gamboling on through lists such as “a leaf-nosed bat, or nose-leaf bat, / the notch-eared, long-fingered, tomb or horseshoe bat” (9). In instances such as these, the poet reminds us that it is the work of poetry not only to show us the horrors of history but also the joy of language, the whimsy present in simple things. McGukian is also a deeply sensual writer: in “Musk,” she writes of lovers’ trysts with depth—“his broad, peaceful arms bringing / two miracles into being at once” and humor—“with one knee pulled upward he anchors / his sled with a flourish” (7), again illustrating the true work of poetry is to show life in all its varied shapes.

McGuckian’s poetry is not easy work and academics have written reams on her varied references and borrowings. But poetry should not be easy; it should instead be full of the rich, deep resonances of history, tragedy, ballad, and even the mundane reworked into rhythms that catch and hold our attention. The skein of McGuckian’s words will bring the reader in and hold her until moments, minutes, and even hours pass and we are no closer to a full understanding of a single stanza.

Yet though McGuckian’s work is challenging, it can also provide deep resonances and even moments of catharsis. Such a moment is found in “Her Dislove of Love,” which ends with the simple uplift, “Last night I stepped out to take down laundry / and took all of the wind, all of the north, in my arms” (54). In this simple act of taking down laundry McGuckian's “I” embraces nature (“the wind”) and the full history of “the north” to hold in her arms—a gesture of love and reconciliation and an acknowledgement of the essential work of the poet. It is this ability to create both resonances of meaning and poetic catharsis that is so central to McGuckian’s work, and her ability to etch horror, tragedy, and pain while also presenting moments of humor and moments of joy, that make her such a monumental talent.