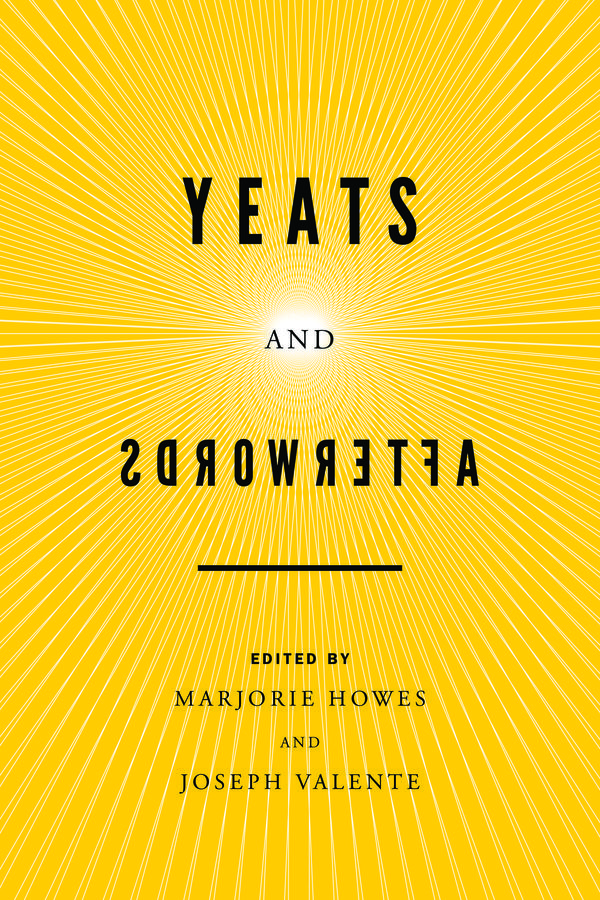 The last line of Yeats’s “Sailing to Byzantium” leaves the reader with three temporal states; the poet, transmogrified into a golden bird, will continue to sing “Of what is past, or passing, or to come.”[1] By bringing past, present, and future tenses together at will, the poem’s ending represents a utopian state that can only exist in an imagined Byzantium after the poet has left his body and the demands of mortal life. The last words of “Sailing to Byzantium” raise the question of whether the poet can ever free his words from what Jed Esty describes as a merely sequential chronos while he remains in this world; and his words gesture toward the hope that once he is out of this world he can reach a kairos of imaginative time (321). Yeats and Afterwords, edited by Marjorie Howes and Joseph Valente, brings together twelve of the most prominent Yeats scholars working today to engage this question of Yeatsian temporality.

The structure of the collection mirrors the three tenses of “Sailing to Byzantium” with sections that deal, respectively, with “past-pastness,” “present-pastness,” and “future-pastness.” With these three temporal states, the editors rightly acknowledge that revivalism plays an explicit or tacit role in all of Yeats’s engagements with time. Just as Yeats must sail back in time to historical Byzantium in his poem to free himself from the tyranny of linear time, throughout his career, Yeats returns to the Young Ireland poets, the Gaelic fili, British Romantics, and other figures of the literary past as a precondition for thinking about modernity and futurity. As the editors write in their introduction, “Influence is an inadequate term for Yeats’s deliberate, even violent inventions of the traditions he claimed to inherit, mine, and extend” (9). Not only does the collection examine Yeats’s revivalism of the literary past, but it also pays particular attention to Yeats’s revivals of his own language through the relentless editing and self-reflexive returns that characterize the Yeatsian oeuvre. The last section extends this definition of “afterwords” to examine the posthumous afterlife of Yeats’s writing through his imprint on later writers; these essays include Seán Kennedy on Samuel Beckett, Vicki Mahaffey on Elizabeth Bowen, and Ronald Schuchard on the Northern Irish poets of the Troubles. Whether focusing on what is past, passing, or to come, the collection offers interpretations of Yeatsian temporality that are notable for both their depth and breadth.

The collection’s major strength is its handling of the two opposite poles of Yeats’s career: the early Celtic Twilight phase and the belligerent, authoritarian late phase in which “the wild old wicked man” rants from atop the boiler. Reneé Fox’s essay begins the collection by situating Yeats among the nineteenth-century English poets interested in the British Museum as a site of nation-formation.  By drawing upon the influence of museum poems on what she calls “the Victorian Yeats,” Fox repositions Yeats’s Irish Revival within its British literary and institutional contexts. This focus on Yeats’s Victorianism allows for a critical reappraisal of his cultural revivalism, which Fox argues borrows from the modus operandi of the British Museum itself, “predicated on a full process of excavating, displacing, and refashioning old Irish legends into modern poetry” (21). Fox is not the only contributor to connect Yeats’s poetics to Victorian roots. Joseph Valente identifies a different set of nineteenth-century British influences—aestheticism and decadence—on the development of Yeats’s distinctive brand of cultural revivalism. These two essays, matched with James M. Murphy’s chapter on the influence of William Carleton on Yeats’s critical writing, show the extent to which Yeats’s cultural revival was created through an idiosyncratic approach to movements of the nineteenth century. The idea of “misprision”—a deliberate misrecognition of the past—appears as a dominant trope in this collection, argued most forcibly in Gregory Castle’s essay (129-131). In the case of the Victorian Yeats, these essays show a writer reshaping the cultural influences of the past to fashion his aesthetic and political futures.

On the opposite pole of Yeats’s career, Yeats and Afterwords features several essays that carefully explore such difficult or problematic late works as A Vision, Purgatory, and Last Poems. Margaret Mills Harper’s essay on A Vision offers a careful bibliographic accounting of the two versions of the metaphysical work—the first published in 1925 and the second in 1937—to show how Yeats put his own ideas under revision in ways that expunged some of the polyphonic energy of the early version and imposed an authoritarian ethos on the text. In another bibliographically attuned piece, Marjorie Howes uses the original plan of composition for Yeats’s Last Poems to show how the intention to place “Under Ben Bulben” first in the collection rather than last (as it was printed), would have allowed the collection as a whole to diffuse and undermine the poem’s controlling imperative rather than imbuing it with the authority of the final word. In both Harper’s and Howes’s essays, we see revisions to Yeats’s work, by either Yeats himself or his literary executors, shaping the fascistic image of late Yeats through the process of revision. The final essay by Jed Esty takes up the controversial late play Purgatory and moves critical discussions of this work away from its connections to eugenics movements and toward an understanding of the play’s bleak vision as a piece of proto-existentialism. Reading Purgatory backwards from the existentialism of the postwar period adds significantly to our understanding of Yeats’s late vision.

As Yeats reminds us in his theory of the gyres, opposite poles often represent embedded points within a shifting dialectic rather than separate points along linear distance. Though Yeats and Afterwords does run roughly chronologically from the poet’s early career to his last words and posthumous influence, there are several essays within the collection that show the importance of Yeatsian moments of return. Two essays on the Cuchulain plays by Elizabeth Cullingford and Gregory Castle highlight Yeats’s continual revisiting of specific themes, tropes, and tales. These contributions make this collection an important resource for any scholar trying to make sense of Yeats’s writing on Cuchulain from 1892 to 1939. While Cullingford attributes Yeats’s lifelong fascination with this story to its thematic focus on the death of the only child—and, with it, his interest in “end times and lost causes” (43)—Castle sees the Cuchulain myth as emblematic of “the logic of misprision” (131) in which errors in interpreting the past allow for the future to free itself from the bonds of history. These two essays offer radically different interpretations of Yeats’s approach to Cuchulain, one seeing a model for an end of history and the other a radical futurity made free of the past. This debate between whether Yeats uses Cuchulain to establish a temporal limit—a boundary that calls to mind Lee Edelman’s “no future”—or to distort temporality for his own purposes, mirrors larger questions in this collection as a whole.[2] Is Yeats a master manipulator of history, a prophet of futural states, a nostalgic chronicler of the past, or an artist plagued and hounded by time and its restrictions?

While the strong emphasis on temporality gives this collection unity and a sense of purpose, there is also a degree of methodological uncertainty at work that may, in fact, point to larger insecurities about methodology in Yeats criticism. In their introduction, the editors point to the formalist critique of the dominance of New Historicism in Irish Studies, and approaches to Yeats in particular (3). They acknowledge the limitations of this focus on New Historicism within the field and position the collection as one that attempts to show the interconnections between history and form: “The notion of Yeats’s ‘afterwords’ aims to extend this formal line of analysis—without forfeiting the abundant insights historicism has to offer—by elucidating the poetic device whereby history comes to occupy the text, not just as a set of substantive concerns, pressures, or determinants, but as a registration of the dynamics of time, that retroactive looping in which the possibility of creation and the inevitability of loss pass into one another” (3). The collection, in other words, argues for temporality as a method for uniting formal and historicist concerns. But it is uncertain whether the book as a whole, driven by such a diverse range of scholars, can systematically accomplish this goal. New Historicism still wields a strong influence throughout the collection, and essays like Guinn Batten’s poststructuralist approach to Yeats’s love poems, drawing upon Jacques Lacan and Slavoj Žižek among others, can seem out of place in light of the collection’s stated methodological goals. This diversity of approaches allows for a broad spectrum of criticism that mirrors the scattered landscape of Irish Studies at large, but without necessarily pointing a way forward. That said, for a collection that brings together twelve scholars of this caliber, there is still a striking amount of thematic consistency. These essays reveal the incredible complexity of Yeats’s approaches to time and do so across his long career and through a variety of methodological approaches. Singing by turns of what is “past, passing, or to come,” Yeats and Afterwords reveals temporality as the goading challenge and essential mechanism of Yeatsian poetics.