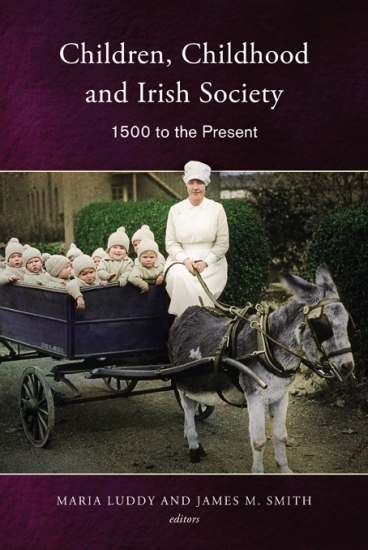 Maria Luddy and James Smith, building upon their landmark co-edited issue of Éire-Ireland, have gathered a collection of essays by Irish, British, and American experts in the field of childhood studies, including Mary Shine Thompson, Harry Hendrick, Margot Backus, and Ciaran O’Neill. This comprehensive volume, comprising twenty-one chapters ranging from Tudor and Stuart Ireland to the present day, aims to fill major gaps in our understanding of childhood in Ireland, and it eminently and elegantly succeeds, weaving an admirably complex and original exploration of what it has meant to be young in Ireland over the past five hundred years.

Organized chronologically and arranged in five sections, these essays collectively take an interdisciplinary view of the topic of childhood, although there is a strong emphasis on history and historical approaches throughout. Smith and Luddy’s introduction masterfully delineates the evolving focus on various versions of Irish childhood: the poor child, the Catholic child, the institutionalized child, the symbolic child, and the indexical child are all phrases that indicate particular critical stances which, taken together, provide a nuanced, multi-faceted discussion of the many ways that children reflect the changing face of Irish society. The editors commend Shine Thompson’s essay, in their introduction, by stating that from its pages “Childhood emerges…not as immutable and singular, but as ephemeral and varied” (25).The same can be said of this accomplished, fascinating collection.

Any examination of children’s lives inevitably implicates the role of parents, as far back as the sixteenth century, when politically motivated fosterage saw boys from powerful Irish families sent to live as wards in English households, as Mary O’Dowd explains in this book’s opening chapter. The luckiest of these boys, O’Dowd writes, was Barnabe Fitzpatrick, who served as Edward VI’s whipping boy, receiving the young prince’s corporal punishments in his place, and who, in 1551, became an official member of the king’s privy chamber at the tender age of sixteen. Fast forward four hundred years, and we arrive at Mary Daly’s essay on the codification of parental responsibilities toward their children’s education, as enshrined in the 1937 constitution. A few pages later, Maria Luddy’s chronicle of the early NSPCC winds the clock back to the late nineteenth century and opens with three archival vignettes of parental neglect and violence. As Luddy explains, the new organization’s pioneering work “revealed the extent and nature of cruelty to children in Ireland” and countered the all-too-common attitude that “‘the child is mine and I will do what I like to it’” (102).  The household and the family unit remain central to most of Irish social history, so it makes sense to focus on childhood and youth as bellwethers for social change.

Childhood also becomes a vehicle through which societal tensions and conflicts are played out, as, for example, when Catholics raised concerns about “ragged schools” (familiar to readers of Dubliners), masking Protestant efforts to proselytize and convert street children (104-5). Social trends such as deinstitutionalization can be clearly traced through their impact on children’s lives. Virginia Crossman contributes an enlightening essay on Irish poor law in the nineteenth and early twentieth century. She writes that poor children were seen alternately as victims and as threats to social stability. As she carefully and thoroughly documents, “responses to child poverty in Ireland reflected the combination of fear and concern implicit in this dual perception” (83). Robbie Gilligan has written one of two chapters on the Kennedy Report, spelling out the changes wrought by this 1970 investigation into residential care. Eoin O’Sullivan writes the other and critiques the impact of the Report of the committee of enquiry into reformatory and industrial schools systems, which set in motion a sea change in the lives of children in care, toward the professionalization of child-care staff, the replacement of large institutions with small group homes, and the preservation of families as a central goal. Later inquiries such as those documented in the Ryan Report, the Murphy Report, and the ongoing Historical Institutional Abuse Inquiry in Northern Ireland continue to mark the public’s growing mistrust of long established Irish institutions.

Literature, too, can be a lens, as can journalism and film. The final two sections of this collection turn their attention to literary and cultural representations of youth in Ireland. This exercise begins with examinations of major authors (e.g., Jonathan Swift and Oscar Wilde) and their works for children as well as their own childhoods. While these sections focus largely on historical rather than contemporary literature for children, each chapter’s author makes a persuasive case for considerations of cultural media in examining the status of the child in Irish society. Claire Lynch, for example, argues in her essay on portrayals of the childhood act of reading that “the recent boom in child-centered Irish literary autobiographies is in part a response to changing conceptions of Irish childhood.” (198).  She notes that multiple memoirs in recent decades have become best-sellers, speaking to the public’s fascination with childhood and continued efforts to understand this pivotal period in human development in relation to national identity.

The editors have taken care to balance English- and Irish-language sources, as in, for example, Máirín nic Eoin’s essay on the portrayal of adult-child relationships in Irish-language autobiographical writing. Rather than isolating children in Gaeltacht communities, nic Eoin argues that the Irish language serves as a central identity marker and brings children into “ever changing contact with larger national, social, economic and cultural systems” (221). Furthermore, the rich detail and folklore in Irish-language primary texts “attests to a high level of emotional investment in children and a pervasive societal concern about their welfare” (225).

One area that could have been given greater attention is the effect of the Troubles on children in contemporary Northern Ireland, or the efforts of the integrated education system in that region to address social division. Nonetheless, no collection of essays can cover every imaginable angle, and Luddy and Smith deserve high praise for giving readers such a generous, thought-provoking approach to childhood in Ireland.